This is my best attempt towards putting together a complete list of common digestive conditions to help with your research.

Why? Because your doctor telling you, “It’s just IBS” is sort of just BS.

IBS stands for Irritable Bowel Syndrome. This is not the same, in any way, shape, or form as IBD which stands for Inflammatory Bowel Disease.

IBS is known as “spastic colon.” Since it’s a syndrome it’s just a set or range of symptoms that may fall into the defining category, Irritable Bowel Syndrome.

The problem with an IBS diagnosis (which is why I call BS on it all the time) is that IBS symptoms are non-specific. Here they are:

What I mean by “non-specific” is that each and every single one of those symptoms can, and almost always do, accompany many of the common digestive conditions below.

If you go into your doctor with those symptoms and s/he asks no further questions and does no further testing, they usually leave you with a bottle of MirLax and IBS diagnosis.

Don’t believe me? Happened to me for years, it’s happened to many of you, and it happened to one of the men I love most in my life – my dad.

So please, if you are reading this and believe that IBS is always accurate, consider something else, too.

If you want to read more about IBS vs IBD, click HERE. 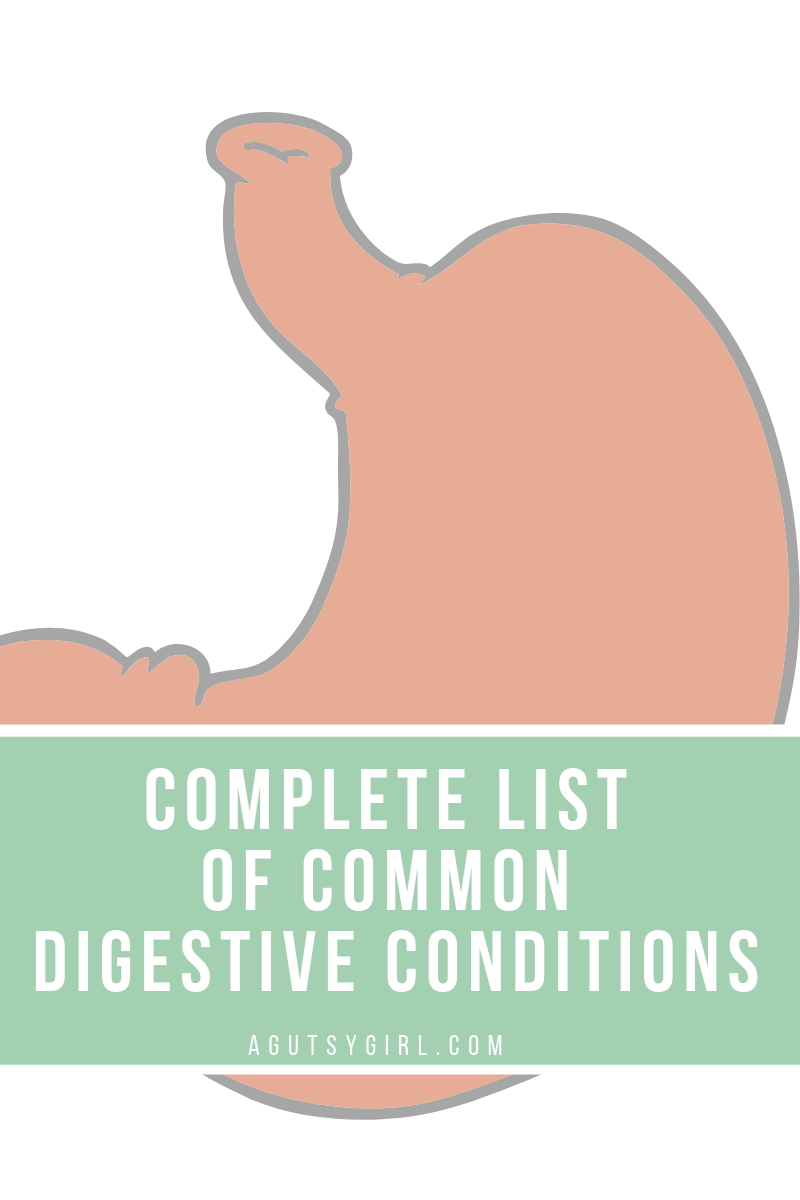 You must make note that I specified “common.” This is very important because the list of digestive conditions is insanely long, complex, and detailed.

If you want to see an even longer list from a government source, check out THIS.

And if you want to see the Internet’s longest list, see THIS list from eMedicine. The second list would take you hours to peruse, and it breaks down every last digestive condition possible.

Today I’m keeping it (mostly) simple, though many of the common conditions below aren’t actually that common. Common-ish didn’t seem right. So just run with it for a second, okay?! 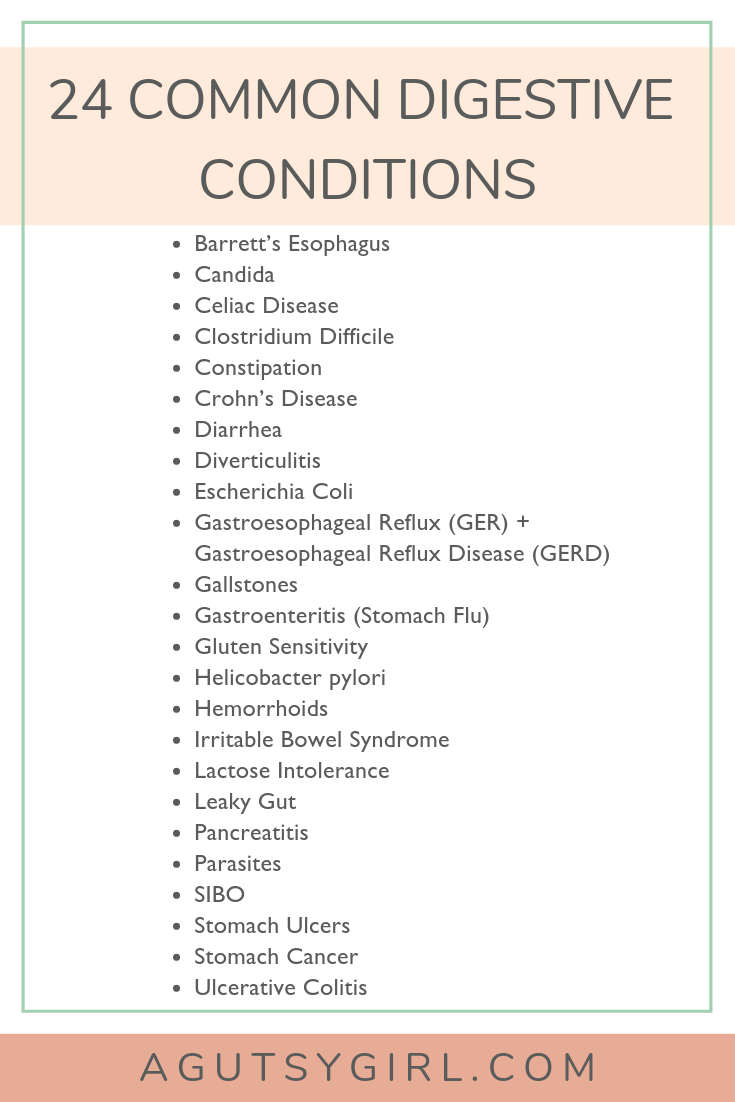 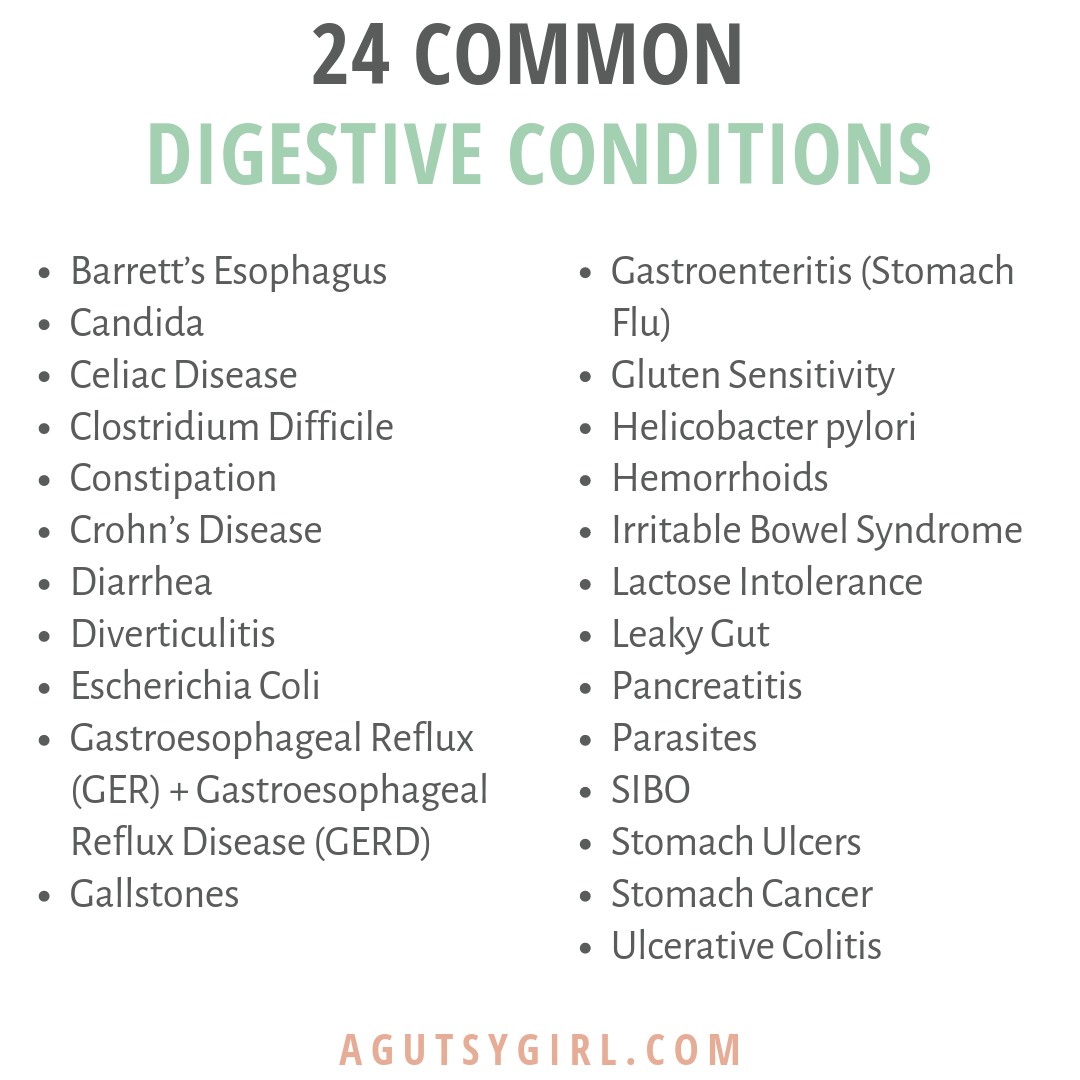 And this list is just the surface, the more common ones. Are there any you’d like to see me go into more detail on? Or any that you would add to the list. Tell me in the comments below!

So how do you know if you have any of these and/or want to confirm that what you are experiencing is more than just IBS? It’s like I always say…..you must test, and not guess.

If you’re wondering where and how to get started with testing, grab the Beginner’s Guide to Digestive Health Testing.