I am asked this all the time, “IBS vs IBD, what’s the difference?”

While people tend to use the terms interchangeably and they share many of the same symptoms, there are major differences between IBS (Irritable Bowel Syndrome) and IBD (Inflammatory Bowel Disease).

Learn all about the differences between IBS and IBD

Warning: this post is lengthy and contains a ton of resources, references, and even more sources/links to check out. It’s because this post was first written in 2016. I then updated and republished it at the end of 2020.

During the past 4 years, I have not only done a ton more research, but I’ve also heard all the IBS and IBD stories. My father passed away from Colon Cancer. And finally, I myself, healed (SIBO; Colitis, suspected remission, a clean scope as of 2018).

So with all of that in mind…..

IBS vs IBD: What’s the Difference?

Click HERE to save IBS vs IBD for later. 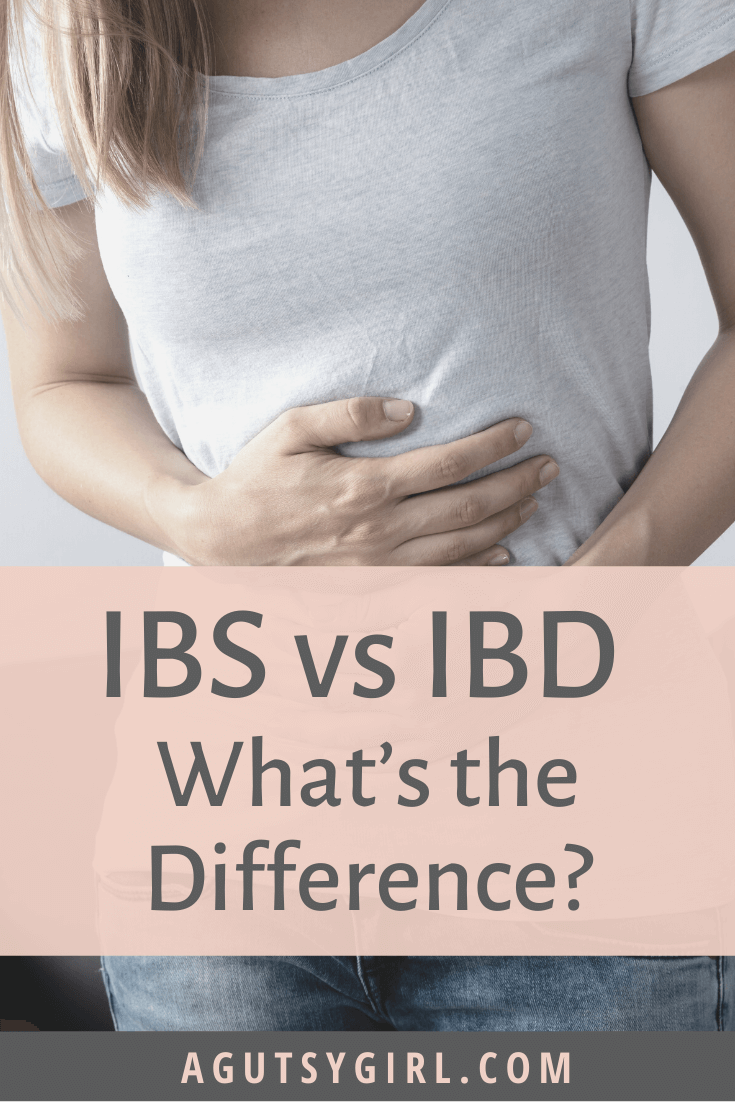 The overarching difference between IBS vs IBD is that while IBS does not create structural changes in the gut, IBD does.

For years, I was told it was “just” IBS, and then I was diagnosed with Colitis.

You can read all about it via my story.

This isn’t just accessory information. Knowing the difference between IBS vs IBD could be life-saving information. 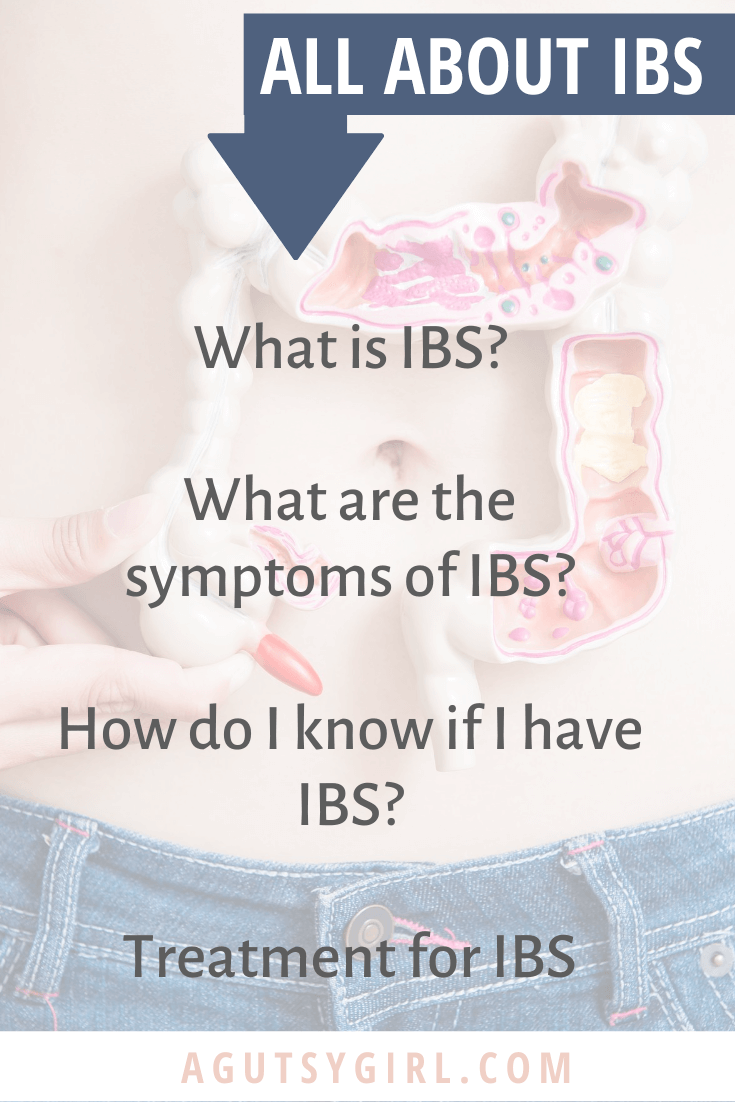 IBS stands for Irritable Bowel Syndrome. It is classified as a syndrome, not a disease.

IBS is known as “spastic colon,” and since it’s a syndrome it’s just a set or range of symptoms that may fall into the defining category, Irritable Bowel Syndrome.

Even though there is no permanent damage done with IBS, it still can cause day-to-day pain, discomfort and misery for those who battle it. This is why I never say “it’s just IBS.” And that’s also why I always put “just” in quotation marks.

I see your pain.

According to the International Foundation for Functional Gastrointestinal Disorders, IBS affects at least 10% to 20% of adults in the U.S. — mostly women — and is second only to the common cold as a cause of absenteeism from work. (source)

(And now you know why I’m so passionate about helping women in particular!)

Finally, and this is something that people overlook all the time, but for which I’ve set out to help with.

What are the Symptoms of IBS?

But in general, here are many of the IBS symptoms:

Read more about IBS via What is IBS C and D.

And track those symptoms easily with the 90-day gut healing journal. Seriously, this journal was created specifically for those with IBS and/or IBD or those who have a haunch that’s what is likely going on. You can use it on your own or (better yet) in conjunction with your medical practitioner.

To be clear, no one truly knows what causes IBS.

Here are some theories:

Let me be very clear, I think the statement “it’s just IBS” is BS. I believe that when given the diagnosis “IBS,” there is always more to the story. Said IBS doesn’t get any better, usually gets worse, because the root cause is not determined.

In fact, HERE are 7 roots causes of IBS.

In the United States, estimates of 10-15 percent of the adult population suffers from IBS symptoms.

This is a great question!

IBS poop is almost always a 1-2 and/or 6-7 on the Bristol Stool Scale. 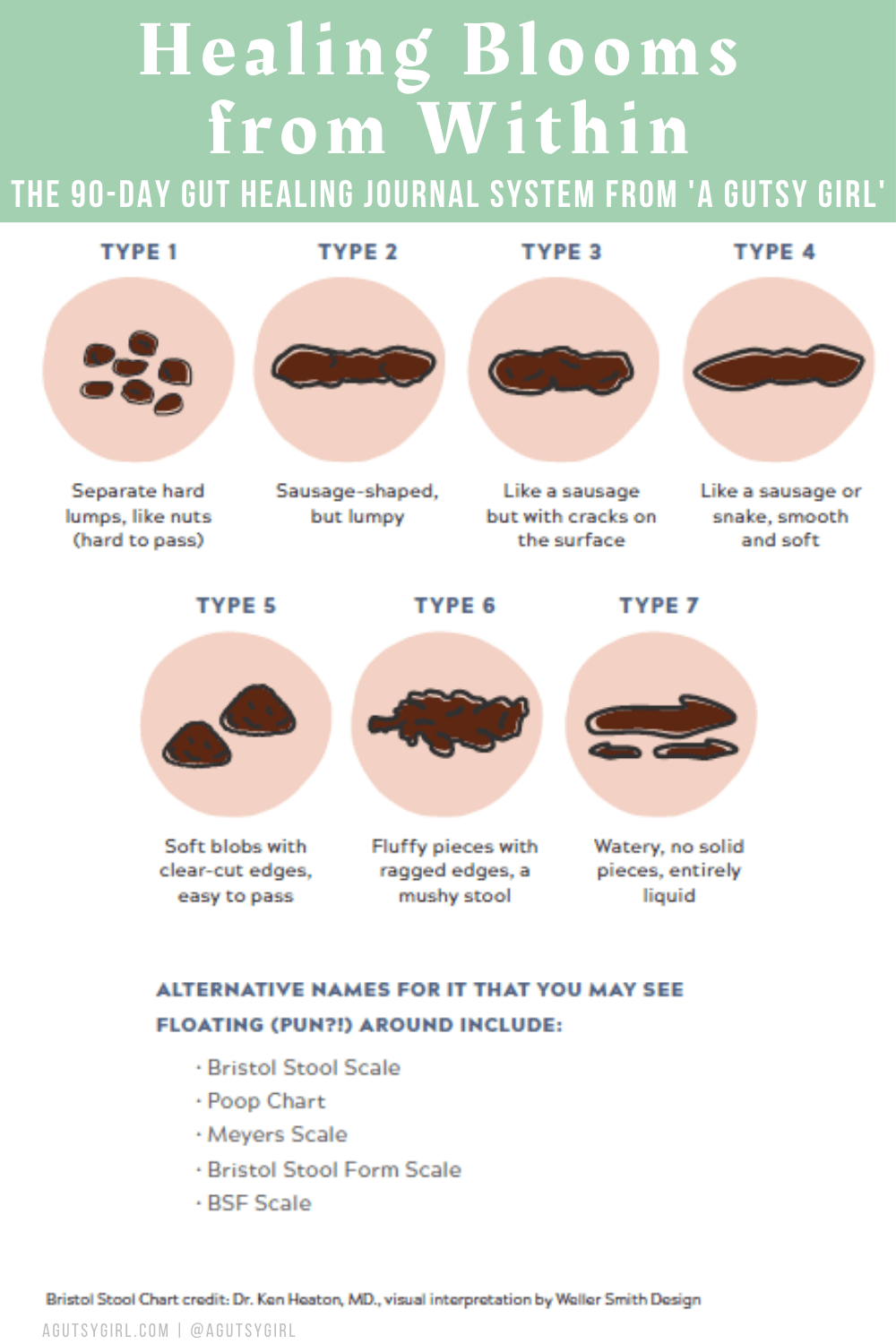 Additionally, the color can be anything from very pale to tarry (ie very dark or black). Keep in mind that anything bright red or black for an extended period of time is not good. This indicates blood, and you definitely need to see a doctor. 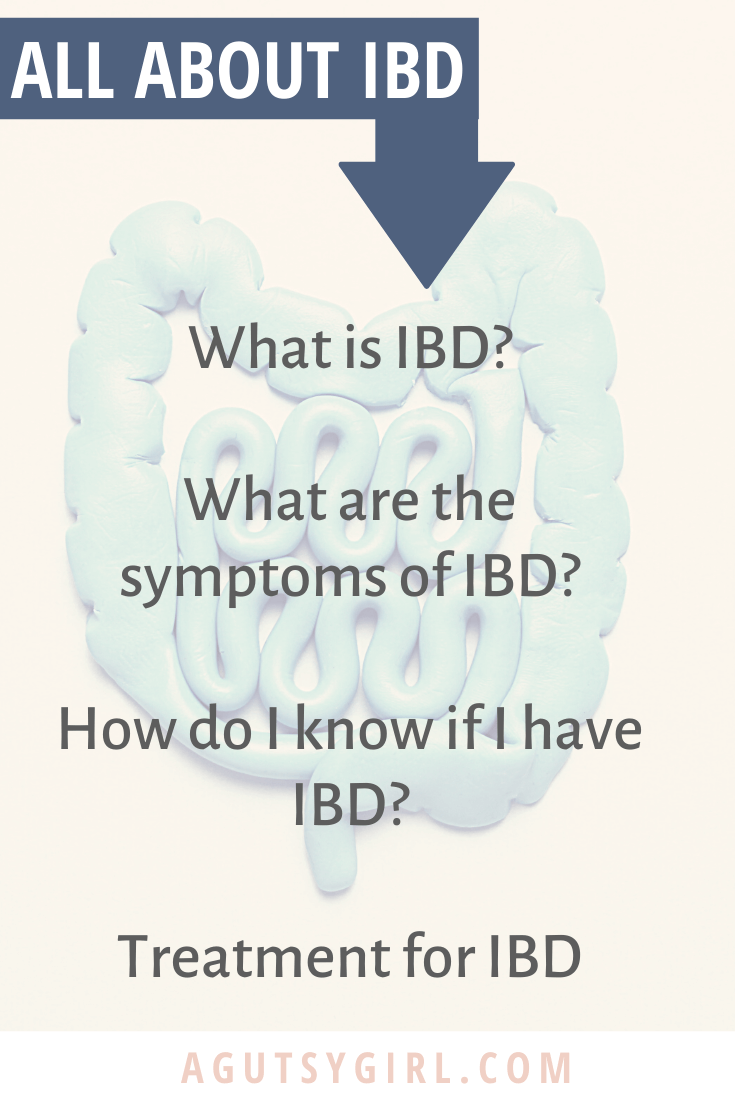 IBD stands for Inflammatory Bowel Disease. It is classified as a disease, not a syndrome.

Unlike IBS, IBD causes changes in bowel tissue and increases your chances for colorectal cancer (source). Because of these changes, IBD is detectable via diagnostic imaging.

IBD involves chronic inflammation on all or part of the digestive tract, and it primarily includes ulcerative Colitis and Crohn’s disease. IBD affects about 1.6 million Americans, most of whom are diagnosed before age 30 (source).

There is no cure for IBD. However, the disease can go into remission.

What are the Symptoms of IBD?

Like everything else, symptoms are unique to the individual and the type of IBD present.

But here are some common symptoms seen in those with IBD:

Similar to IBS, no one knows for sure what causes IBD.

We do know that it is known to involve an interaction between genes, the immune system, and environmental factors. I like to call the the not-so-perfect storm.

Did you know that most people are diagnosed with IBD before age 35?

What are the Most Common Types of IBD?

While IBD is the umbrella category, there are specific diseases that fall within the category.

The two most common types of IBD are Crohn’s Disease and Ulcerative Colitis.

While they are frequently lumped together in discussion, they are not the same.

What is Crohn’s Disease?

Crohn’s Disease can affect any part of the GI tract, from mouth to anus. It can exist in “patches” vs. streamlined.

Crohn’s can be broken down further by type: 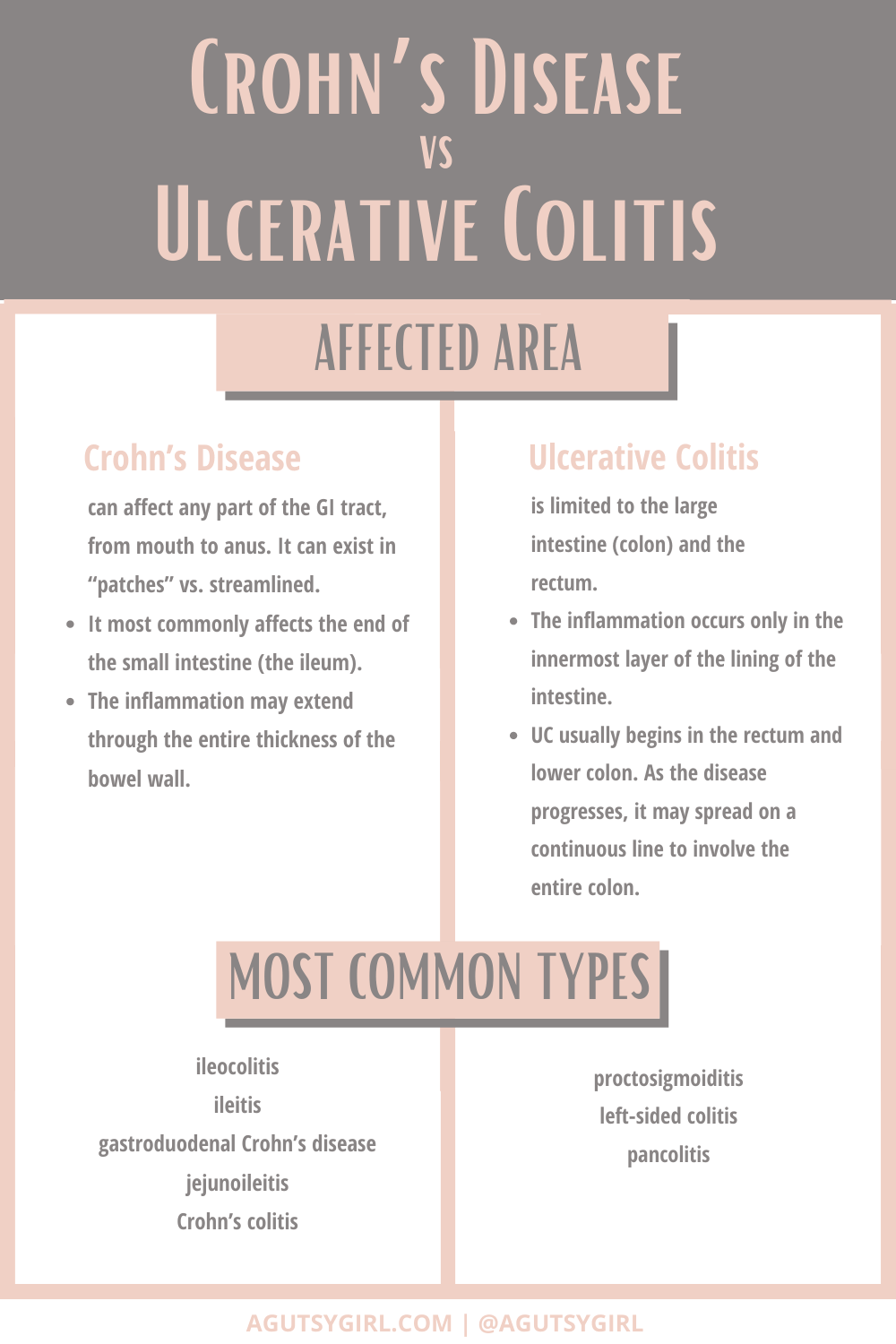 What is Ulcerative Colitis?

Unlike Crohn’s Disease, Ulcerative colitis is limited to the large intestine (colon) and the rectum.

By the way, there are many more beyond this. For example, I was diagnosed with Proctitis.

How Do I Know if I Have IBS or IBD? 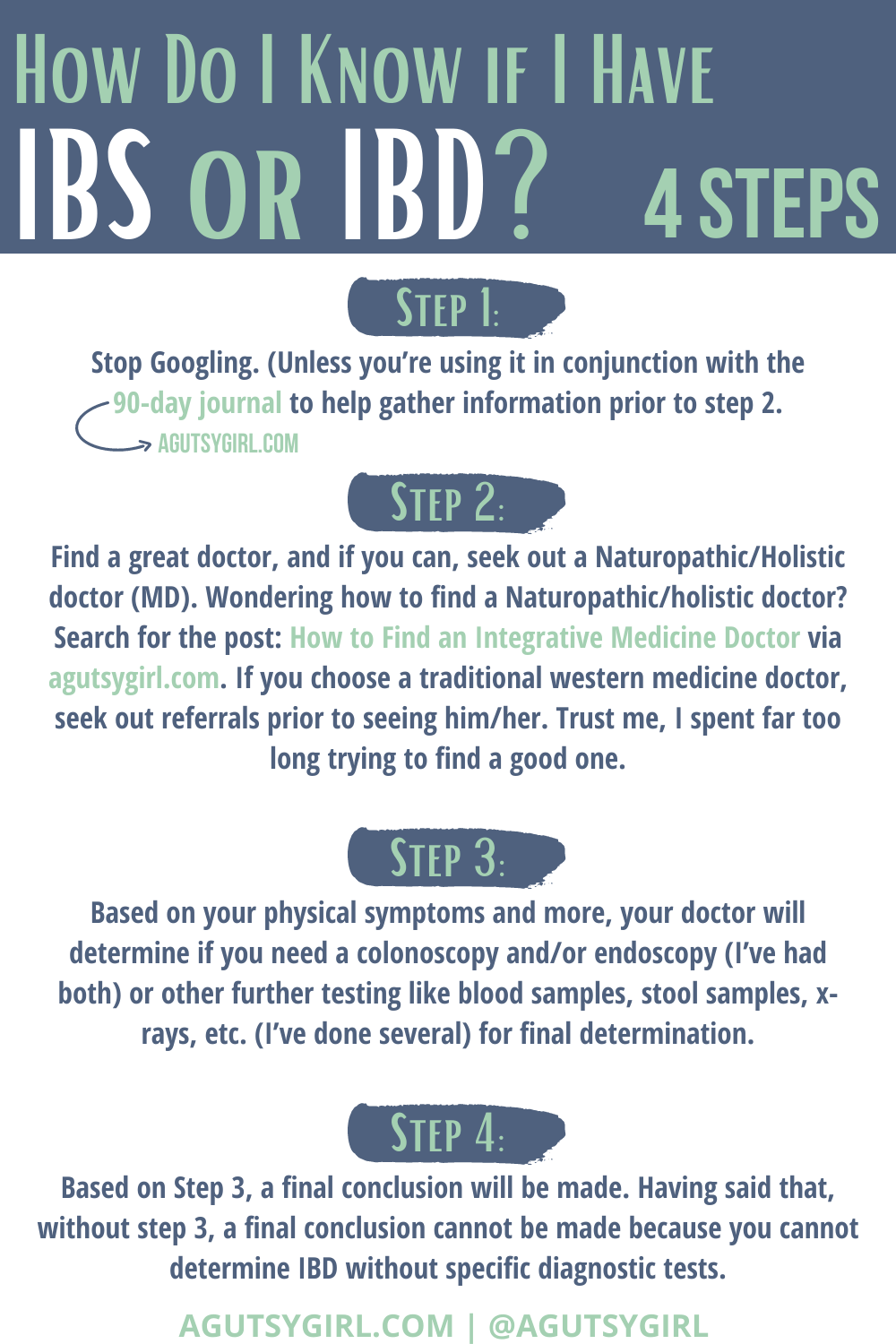 Stop Googling. (Unless you’re using it in conjunction with the 90-day journal to help gather information prior to step 2.

Find a great doctor, and if you can, seek out a Naturopathic/Holistic doctor (MD). Wondering how to find a Naturopathic/holistic doctor? Click HERE for How to Find an Integrative Medicine Doctor. If you choose a traditional western medicine doctor, seek out referrals prior to seeing him/her. Trust me, I spent far too long trying to find a good one.

Based on your physical, symptoms and more, your doctor will determine if you need a colonoscopy and/or endoscopy (I’ve had both) or other further testing like blood samples, stool samples, x-rays, etc. (I’ve done several) for final determination.

I understand being scared, spending money on testing, and going through any and all of it. I’m here to listen and help however I can. I created The Beginner’s Guide to Digestive Health Testing to help get you started.

What are the Treatments for IBS and IBD?

Click HERE to save these treatment options for later. 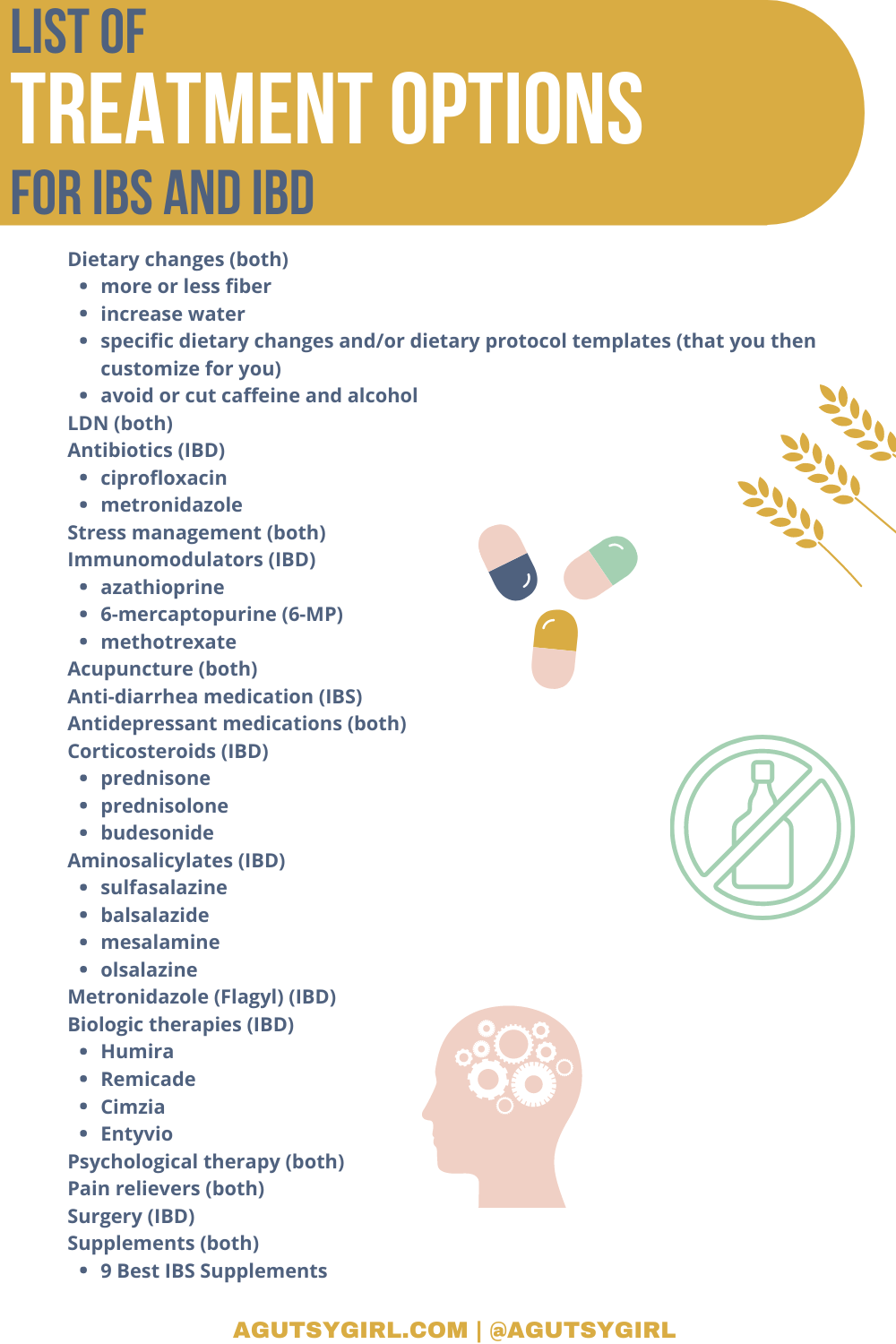 This one is 110% subjective based on your doctor, personal beliefs, and choices.

Furthermore, the treatment can be dictated by the stage and severity of the IBS and/or IBD and even whether it’s IBS and/or Crohn’s Disease or Ulcerative colitis specifically.

Here is a list of several treatment options (not an exhaustive list and not including many/going into detail on lifestyle things which are huge factors):

I am passionate about gut health and in particular, women who have IBS and/or IBD.

Why? Because IBS and IBD affects women mostly, and yet, most women are so embarrassed by it that they suffer, alone, in silence.

I don’t want this for you! 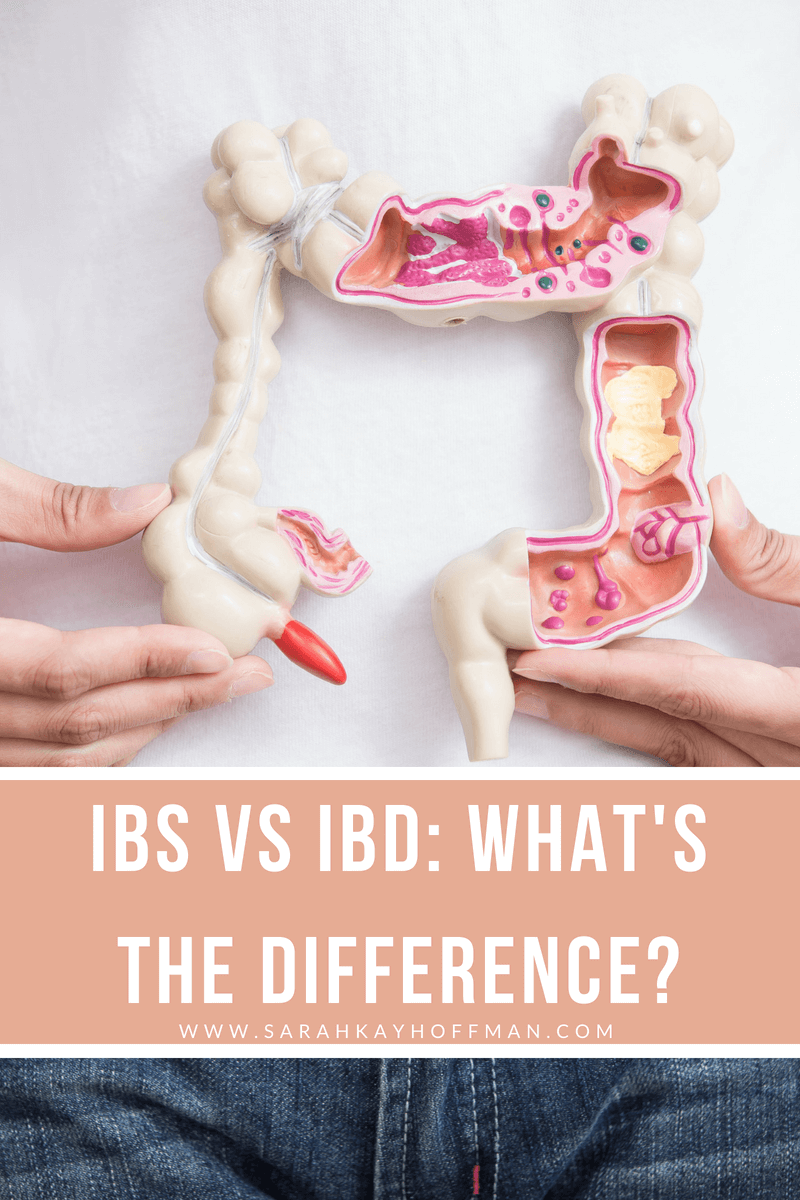 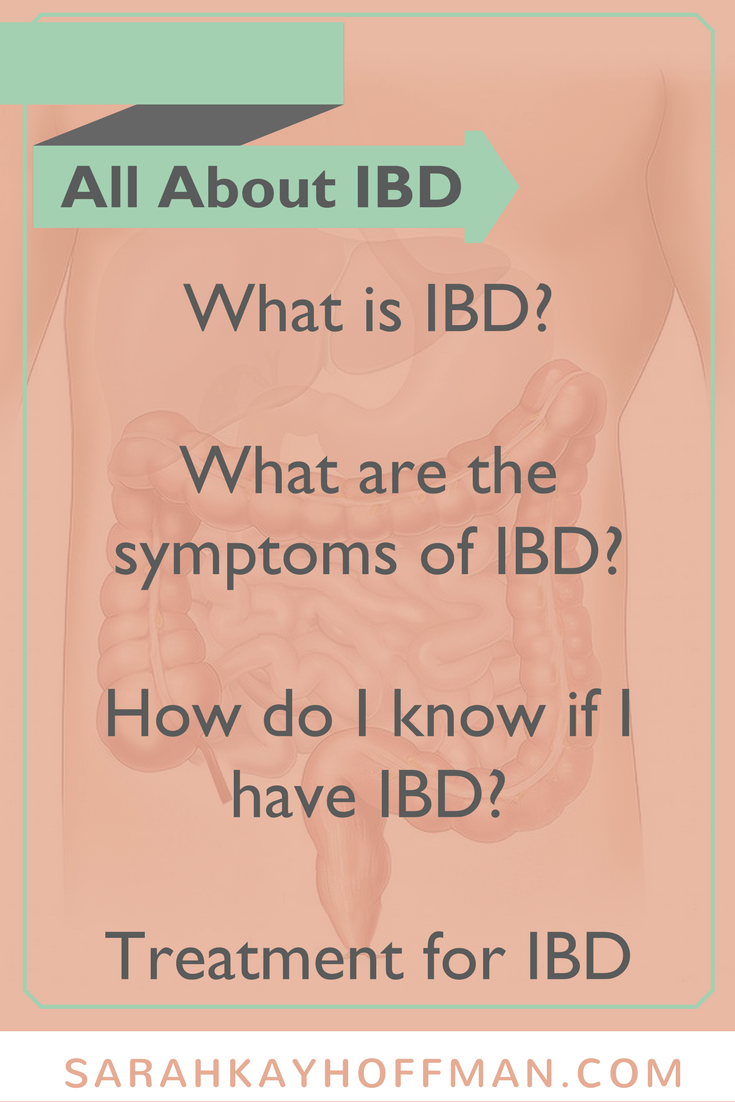 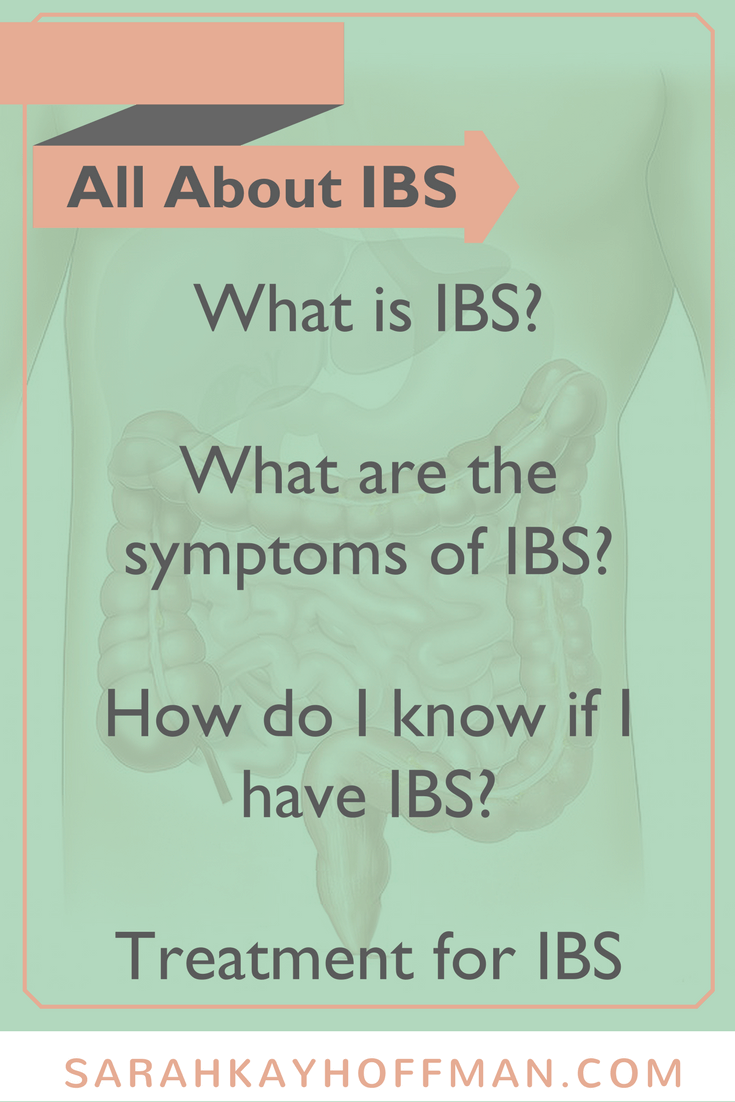 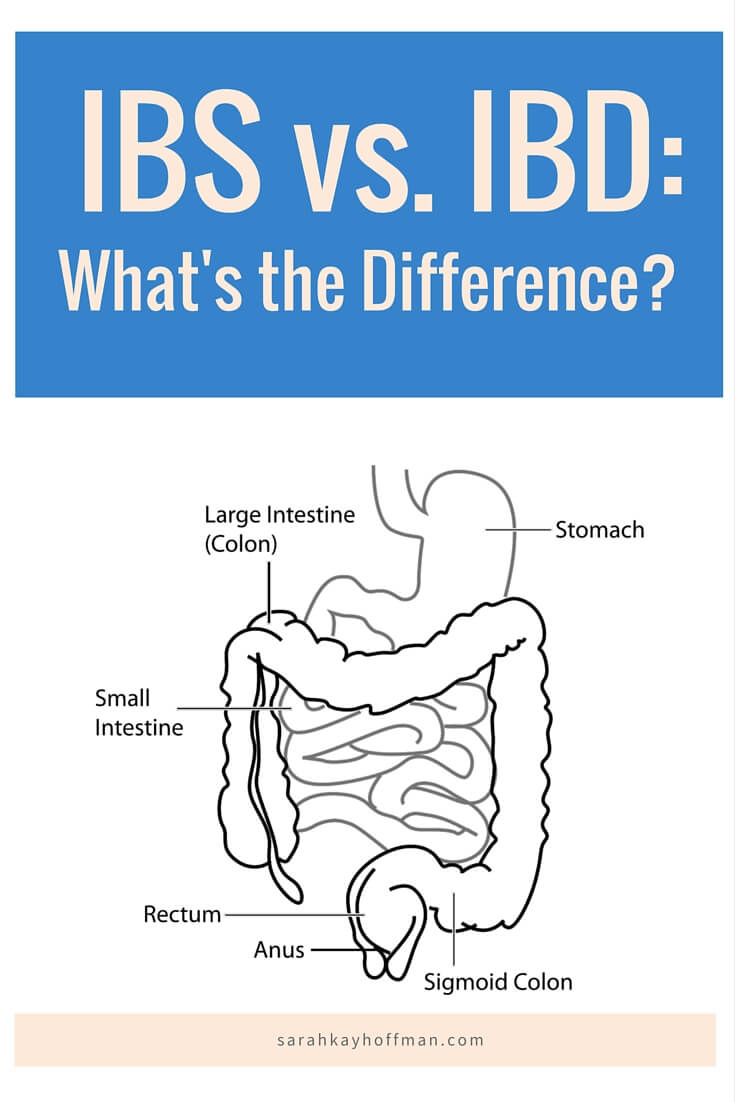 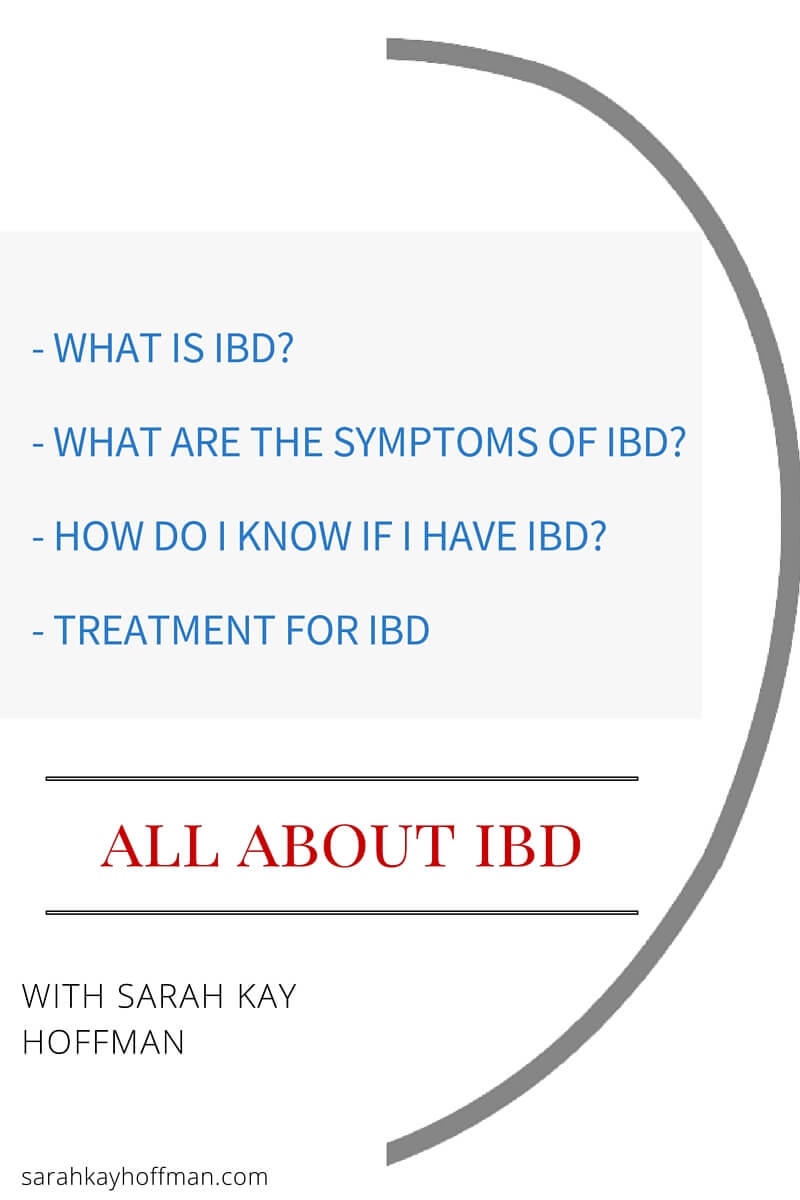 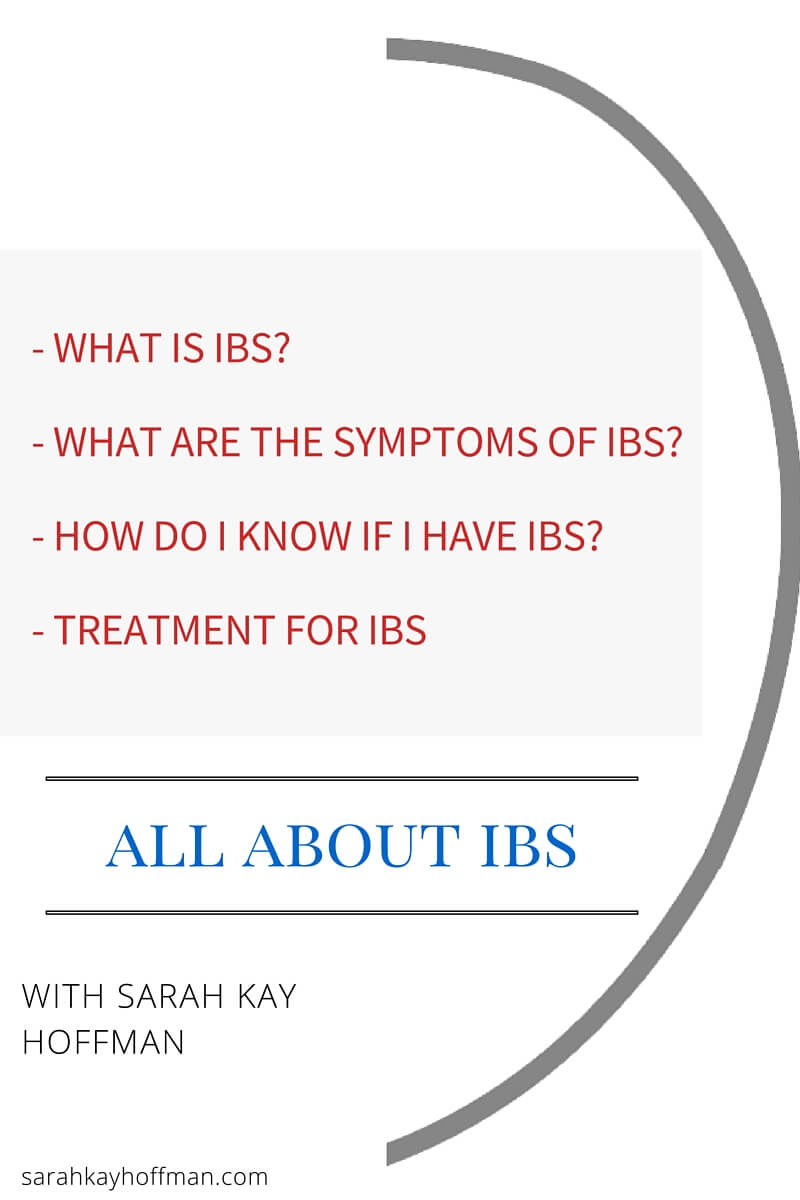