Today we are chatting Celiac, SIBO, and eating disorders….but this isn’t my story.

I can’t even begin to tell you how much I love sharing Your Gutsy Stories. It’s so important that I show up here (almost daily at this point) to give you all the information and resources for healing, but this wouldn’t be the incredible community I’m trying to build if I didn’t share the community’s real life stories. 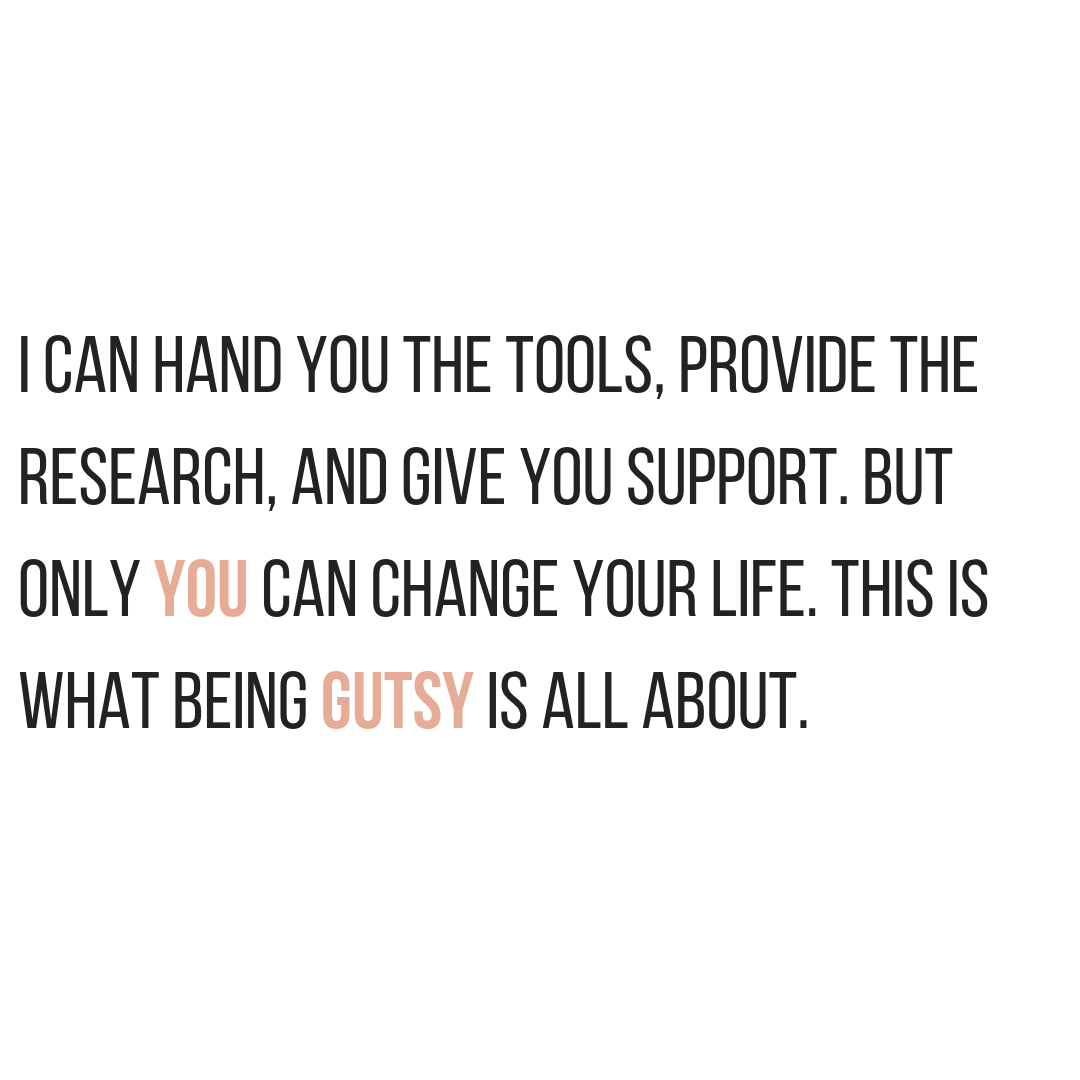 Meet Avery Rosenbloom. I met her through the A Gutsy Girl Instagram. Sweet as pie. She private messaged me saying, “You’re a life saver.” Upon checking out her profile, I was intrigued and asked, “Would you like to tell your story on my website?” She was so excited to share with you all!

And today, I am excited to introduce you to Avery and to her story.

Know this: neither Avery nor you are alone. I have been there. It’s nothing you can make up, and it’s certainly nothing we ever choose.

My name is Avery, and I’ve been in the process of healing my gut for a little over a year now. 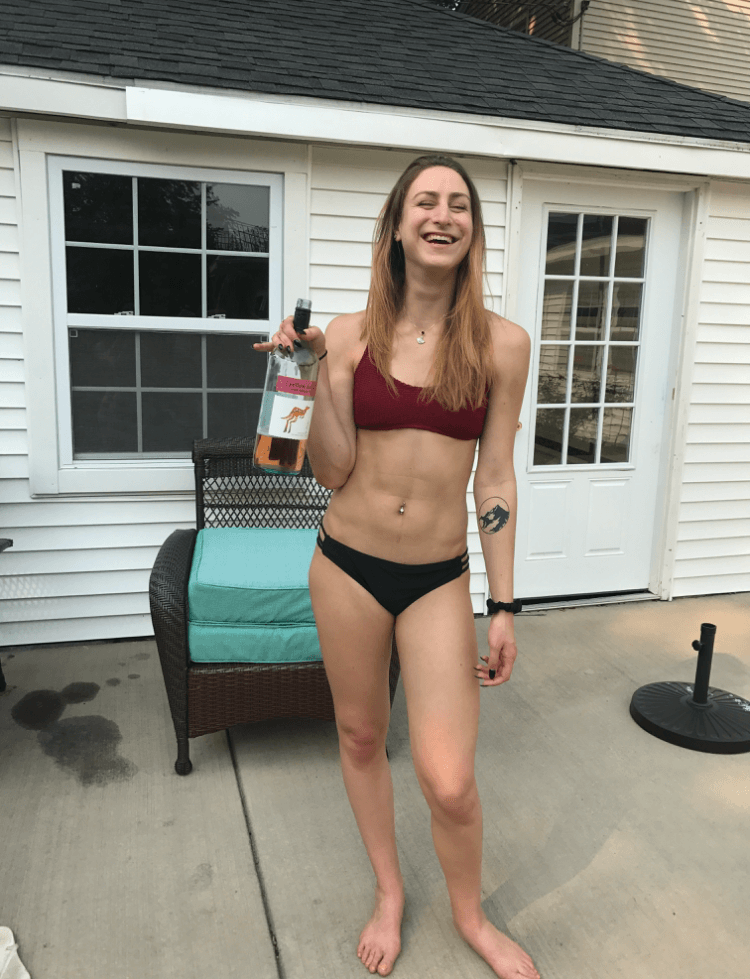 Summer of 2017, had been diagnosed with celiac for about a year now and feeling great! I was vegetarian at this time and just about to go vegan (I did the following month).

I’m currently 21 years old. But I’ve been dealing with stomach issues since about age 14.

After suffering through extreme bloating, brain fog and unshakable fatigue for years, I finally sought out a gastroenterologist my freshman year of college. After some testing, I was diagnosed with celiac disease.

As upset as I was to have to give up my favorite foods (I had a HORRIFIC diet back then, but that’s another topic all together…), this diagnosis was truly such a blessing.

Within a week of removing gluten from my diet I felt the best I had in a long long time. Over the span of about two months I lost about 15 pounds from inflammation alone.

During this time period, I was feeling really good and happy with my physique. I no longer looked 7 months pregnant, and decided to pay more attention to my diet as a whole.

I’m going to condense this a lot, but basically this was the start of an entirely new battle: my eating disorder. I assumed a vegetarian diet for about a year and a half. Then, I decided to go fully plant-based (vegan) after watching a documentary called “What the Health.”

I’m not trying to impart blame on a film by any means, but this was essentially the first time I was taught to think of foods as good vs. bad. I was genuinely terrified of dairy because I could not see past the fat and cholesterol content of it.

This huge fear of foods became quite problematic for me when my gut decided to get revenge on me for all the malnourishment. I was not a “good vegan” at the start, meaning I ate a lot of soy-based products as opposed to fresh fruits and veggies. I can’t say for certain this was the ultimate cause of my stomach issues, but it is undeniably a huge factor.

Starting in January 2018 after being vegan for around 8 months, all my symptoms prior to the celiac diagnosis came back, but they worsened quickly and were far more severe than I could remember ever dealing with. When I would get bloated from gluten, it would always subside by the morning. However, I was now dealing with painful bloating that left my stomach visibly distended and hard, and this feeling would remain.

As I’m sure most of you can relate to, the bloat absolutely destroyed my self esteem and I felt the worst I had about myself in a long time. While I had already started to deal with symptoms of an eating disorder (particularly orthorexia, as I was OBSESSED with every single bite of food I ingested), this worsened rapidly overtime. I came to the wild realization that if I simply didn’t eat anything, I wouldn’t bloat. I fell into horrible patterns of restricting, eating less than 1000 calories a day, in addition to exercising.

Every few weeks or so I would break down, binge, cry for hours, then repeat the same cycle. In hindsight, my heart breaks for that girl who was struggling so severely, but I am also overrun with guilt as I know my ED (eating disorder) only worsened the problems in my gut more than ever. 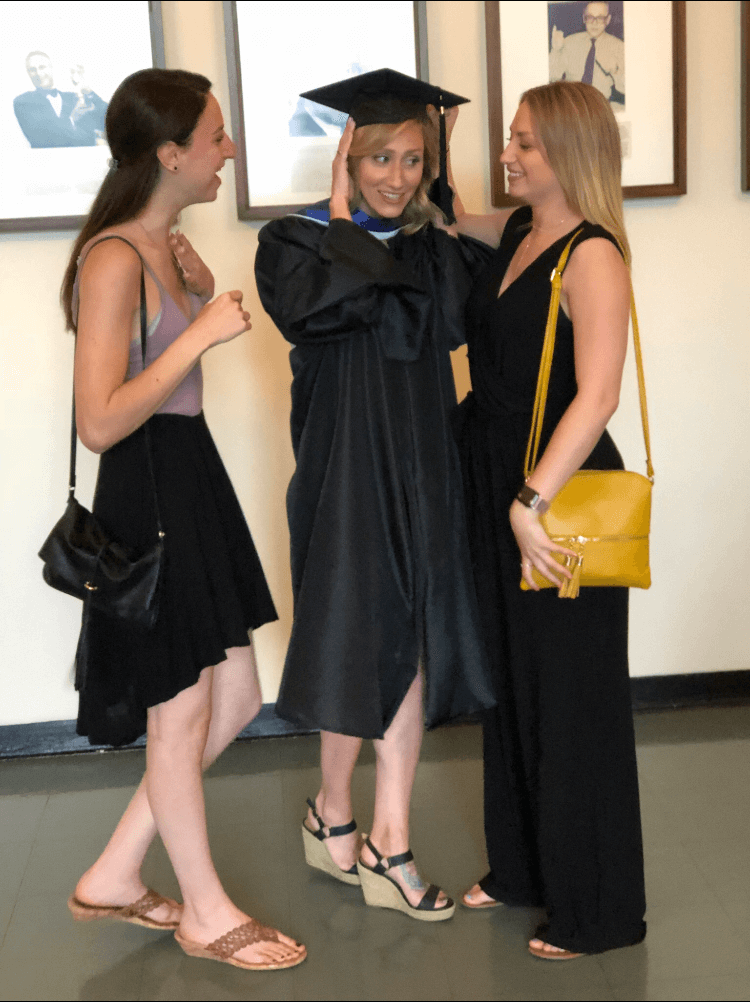 This was the weekend after my college graduation, when my family had been concerned about my size (I remember being shocked by these pictures also.))

In May 2018 (about 5 months in), my family pulled me aside in tears the weekend of my college graduation. They were horrified at my size (I was at about my middle school weight, and I’m 5’11…NOT good). For the first time, I was shocked by how poorly I had been treating my body.

I began seeing a gastroenterologist who ordered a bunch of tests as well as a therapist to try and address the eating disorder aspect. About two months in to testing and appointments, I finally got an answer, but one that I dreaded: SIBO.

I’d heard horror stories about this diagnosis before, but was happy to at least have an answer. My doctor gave me a Xifaxan prescription for about 14 days, then it was recommended I follow the low FODMAP diet. Well, this did absolutely nothing me, and I swear I felt worse while on the Xifaxan.

Once August rolled around, I returned to college (my first semester of graduate school) with zero progress in treating my SIBO. School got busy immediately, and I quickly put my gut health on the back burner. It wasn’t long before I relapsed into my ED habits, simply not eating because I didn’t want to deal with the uncomfortable symptoms. This was a double-edged sword though, as the intense restriction left me so foggy and unable to focus on my studies anyhow. 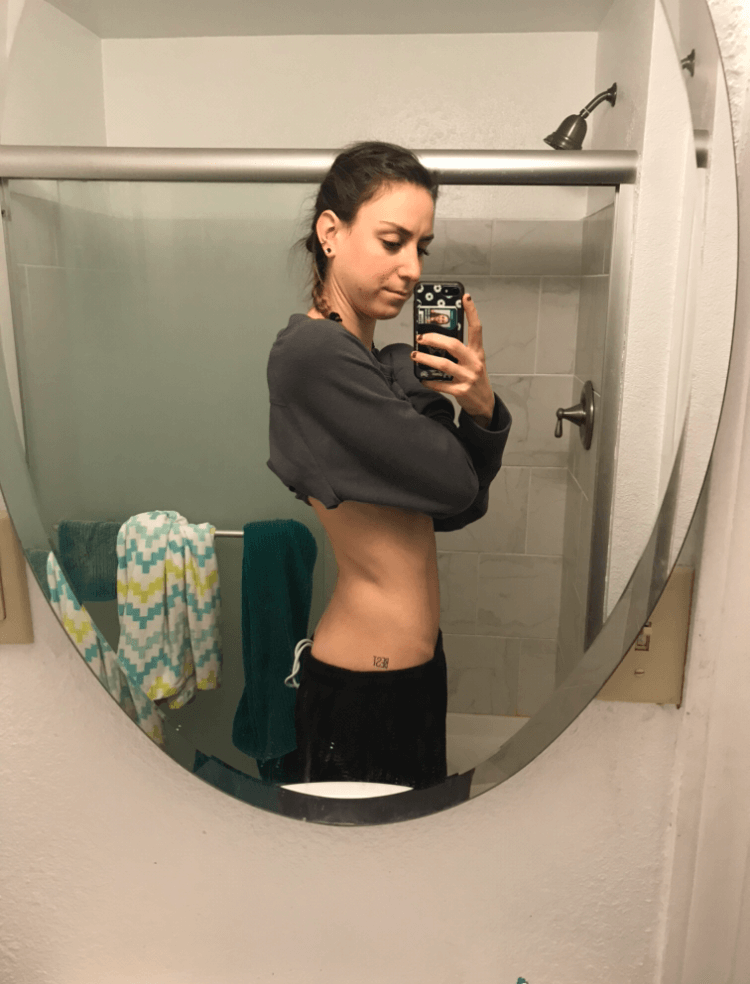 (The lowest weight I hit, when my symptoms were awful and as a result I was restricting hard. I knew things were bad at this point but didn’t know what to do.)

The semester finally came to an end. In December I was at an even lower weight than when I began therapy. Additionally, I was feeling so incredibly helpless in terms of my stomach issues.

I wish I could say there was a magical moment where everything changed and things got better, but that’s simply not true. BUT what I will say is I did have a mental epiphany, and since then I have not turned back. 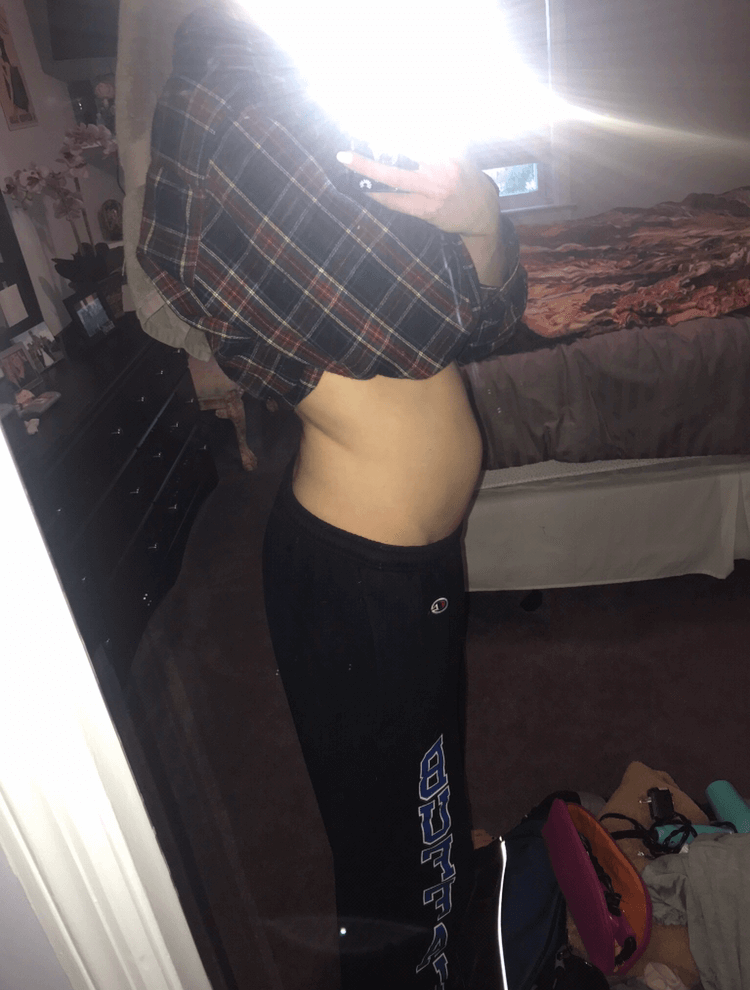 ((This was the night I binged (and was so so painfully bloated as a result) and decided I needed to make a change. This was a real wake up call for me.))

I specifically remember one night in January. On that night, I had just binged and ate an insane amount of leftovers in the fridge.

I was on the floor in the middle of the night, crying hard, when I finally just sat up and decided I had had enough.

Enough of the hunger, of the guilt-stricken binges, of being uncomfortable in my own skin, all of it.

The next day, I decided to start therapy regularly again. I had stopped once school got a bit crazy. And I also chose to take the spring semester off from school. I had been in the process of applying for PhD programs for the following fall, but knew I needed a break to heal myself mentally and physically before diving into such a rigorous program.

My biggest advice to anyone dealing with something similar is inform yourself! I felt that if a doctor wasn’t willing to truly understand my diagnosis (anyone with IBS and/or SIBO can attest to this), then I would do the research myself.

Enter Sarah’s guide – The Gutsy Girl’s Bible!!! This is truly one of the most useful resources I stumbled across. What I love about Sarah’s guide is that she makes it very clear: no one stomach is the same. So while this is what worked best for her (and likely will provide you some relief as well!), she emphasizes that you can customize your diet, supplements, etc. to what works best for YOU.

This was something that took awhile for me to understand. I spent so long trying to adhere entirely to a specific diet (Low FODMAP, GAPS, SCD), but there are no written rules for MY stomach!

Today I do my best to manage my triggers. I write down times when I have a flare in symptoms to try and trace the cause. Most importantly, I practice patience.

For the longest time I was looking for something that would give me immediate relief. It took a long time for my gut to get this damaged, and it will take a long time to repair it. But my health (and yours!) is worth it, so I will continue to work on healing myself for as long as it takes! 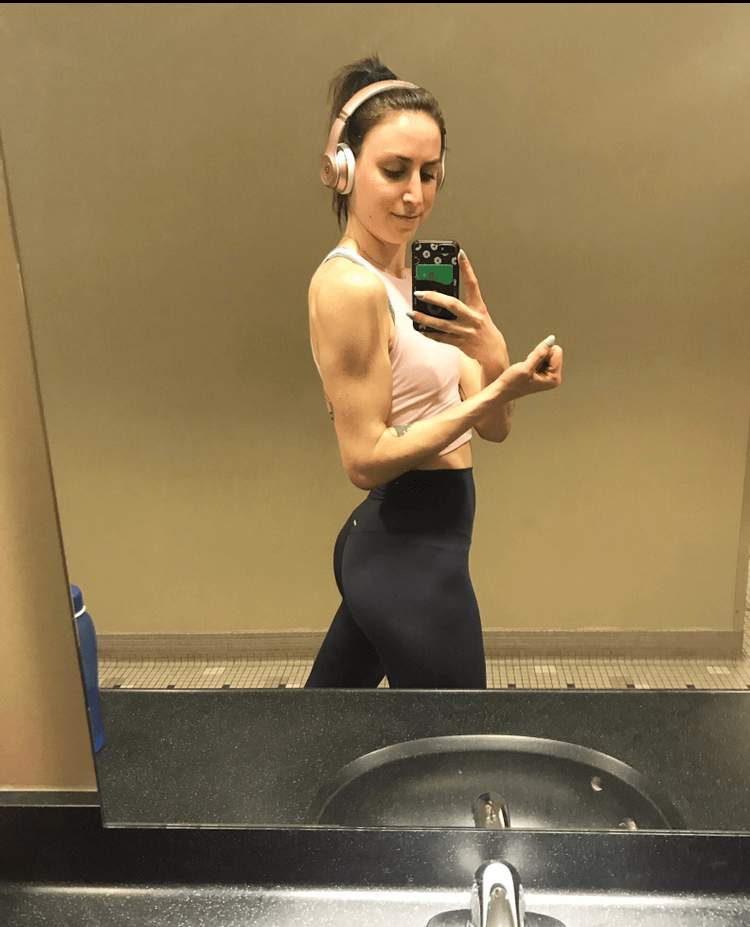 ((Now – back to a healthy weight (though I never weigh myself!), exercising a few days a week and feeling good.

I’m still figuring out my gut. But I am patient and not giving up.

In addition to managing my diet, (not vegan anymore, which is OK- reintroducing meat has honestly done my body wonders) I also regularly see a certified nutritionist and take various supplements that work for me. 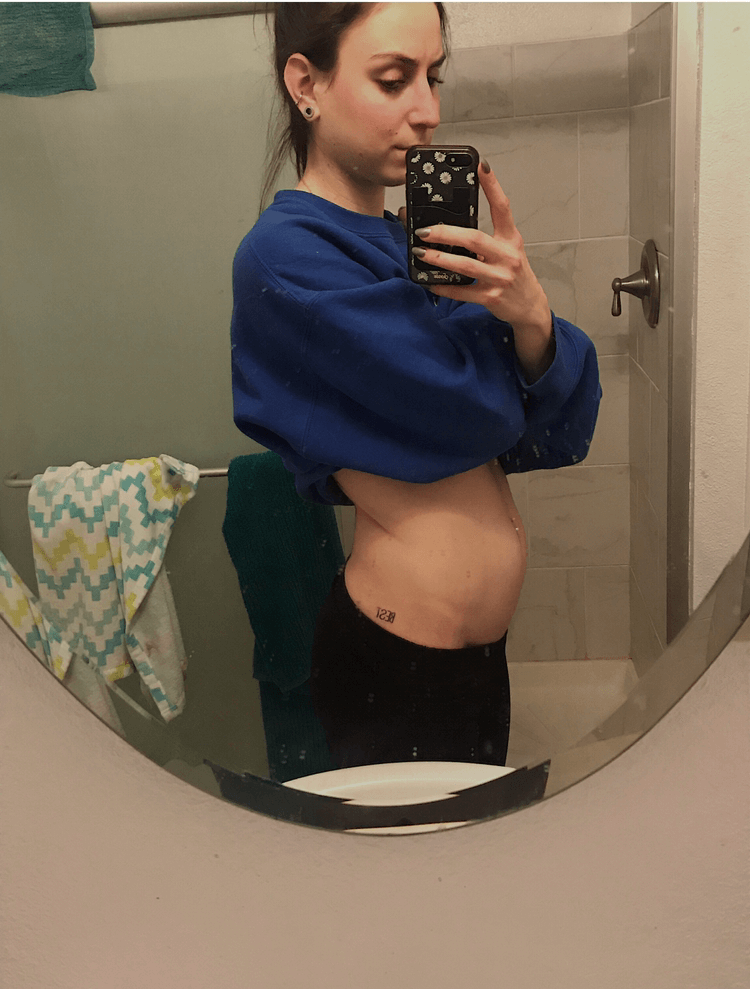 This experience has made me so incredibly interested in both nutrition as well as the patient experience of IBS.

Never before have I had to advocate so much for myself. I have had to fight to prove that my symptoms are REAL. And I’ve had to deal with the social stigma of IBS (as most people assume we just poop a lot).

With that being said, I’m starting graduate school in the fall to receive my PhD in Sociology. While I intend to research multiple things, one of the main topics I plan to study is the patient experience of those with IBS.

I still struggle with both eating disorder thoughts and physical gut issues on a daily basis. But the change in mindset has truly made all the difference for me.

My biggest advice would be stop feeling sorry for yourself. Do your research, and prioritize your health, because nobody else will do it for you. In addition to Sarah’s guide, there are so many wonderful resources out there that I would be happy to share. My Instagram is @talktummytome where I am documenting my gut healing journey and ED recovery. I would love to chat with anyone who’s interested, and wish all of you the best of luck on your own healing journey.