Knowing these two main IBS and IBD triggers could help you identify the onset of your misery.

It’s a common question I get,

Nothing in my life seemingly changed, but all the sudden this severe IBS/IBD/other came on. Why?

I’ll then dive into a series of questions, taking the individual back to the “start.” This place is a place most don’t even know they know. So I’ll ask them questions pertaining to the two main IBS and IBD triggers below and before they know it they are saying,

Yes! Oh my gosh, yes, that happened. Shortly after it happened all of this crap started.

My story is, in fact, very similar. Nothing major stood out as I was growing up – well, things here and there, but nothing super intense.

I left for college (leaving home from my mom, dad, and brother was extremely hard for me initially), went through an awful breakup, and adjusted to living all alone.

September filled with super high stress flowed to October when I came down with a nasty illness. I couldn’t get well. It lasted about two weeks, and during that time I made an urgent care trip or two. There were antibiotics and, eventually, I was “well” again. “Well,” because it wouldn’t last long.

That’s where my story begins – the earliest recollection of key triggers. When I share my story with others in person and on podcasts, it’s there that I’ll usually start.

Because I think it’s very important.

After years of research, I know that my situation is not just random; it’s the story for most people.

If you’re sitting there today reading this, wondering, “What triggered this mess?” I have you covered, making it simple because almost everything I’ve ever read, research, and heard from other Gutsy women all comes back to these two main IBS and IBD triggers. 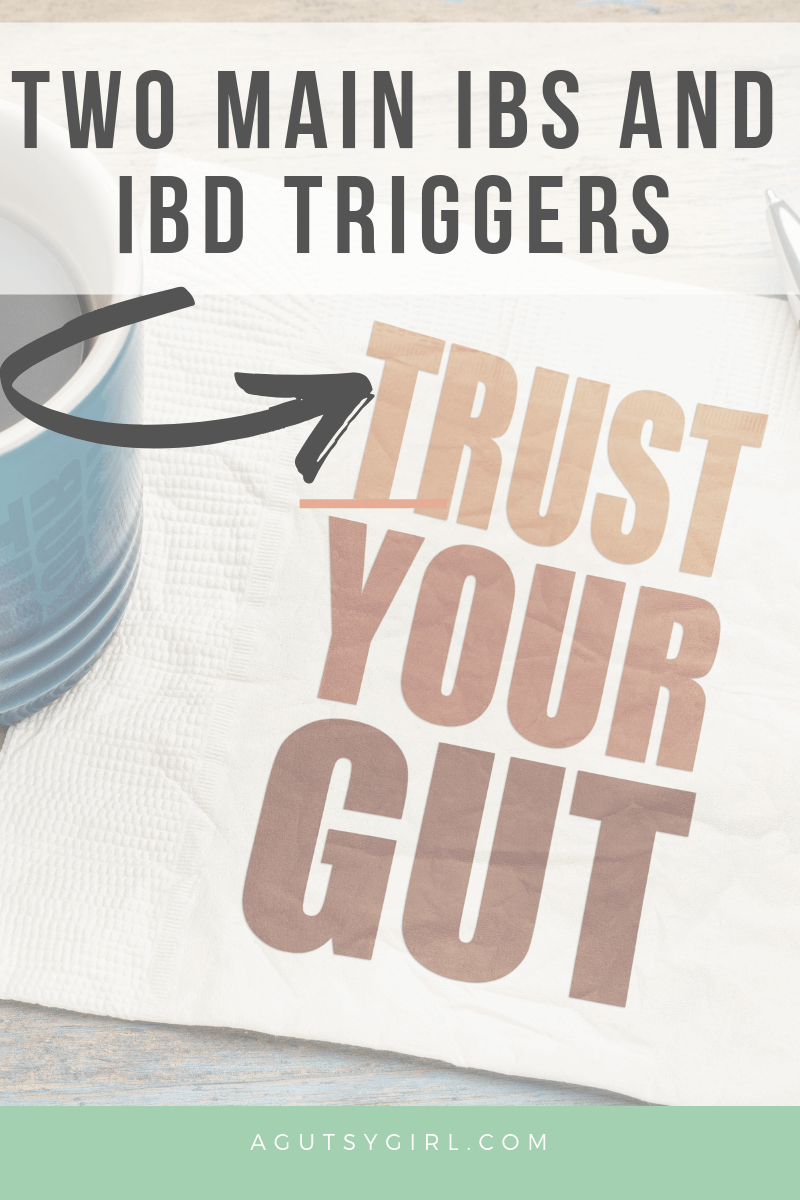 Most of the research is around triggers/onset as they relate to autoimmune conditions, but I find the same triggers are true for generalized IBS (SIBO would be in this category) as well.

This includes both emotional (i.e. death of a loved one) and/or physical (i.e. childbirth).

A high proportion (up to 80%) of patients reported uncommon emotional stress before disease onset. Unfortunately, not only does stress cause disease, but the disease itself also causes significant stress in the patients, creating a vicious cycle. Recent reviews discuss the possible role of psychological stress, and of the major stress-related hormones, in the pathogenesis of autoimmune disease. It is presumed that the stress-triggered neuroendocrine hormones lead to immune dysregulation, which ultimately results in autoimmune disease, by altering or amplifying cytokine production. (source)

Remember, periods of high stress can mean many different things. The stress you feel for a short-period of time can be a good thing; the stress that’s super intense and/or chronic, is not.

Stress is not just the worry over a work assignment. It can be everything from the workouts that are exhausting your body to a huge heartbreak and, yes, even childbirth.

While I have never given birth, I can’t tell you the number of women who have told me that after they had a baby, nothing was ever the same again (in many ways!)

This includes: bacteria, viruses and parasites.

In addition to genetic factors, environmental triggers (in particular viruses, bacteria and other infectious pathogens) are thought to play a major role in the development of autoimmune diseases. (source)

And here’s the thing about those viruses, bacteria, and other pathogens – you might not even remember it. For example, many people are triggered upon returning home from a trip overseas. They suddenly remember the water or “off-tasting” food they ate, a day of throwing up, and then never quite being the same.

In fact, did you know that Rifaximin, the antibiotic many with SIBO use (raising my hand!), has traditionally been used for “travelers’ diarrhea?” It’s one of the reasons that, without a Western doctor prescribing it to you under those terms, you would never be able to obtain it at a reasonable price. Read: Why is Rifaximin So Expensive.

Beyond traveling, though, there are numerous other examples of bacteria, viruses, and other pathogens. Some to consider are: 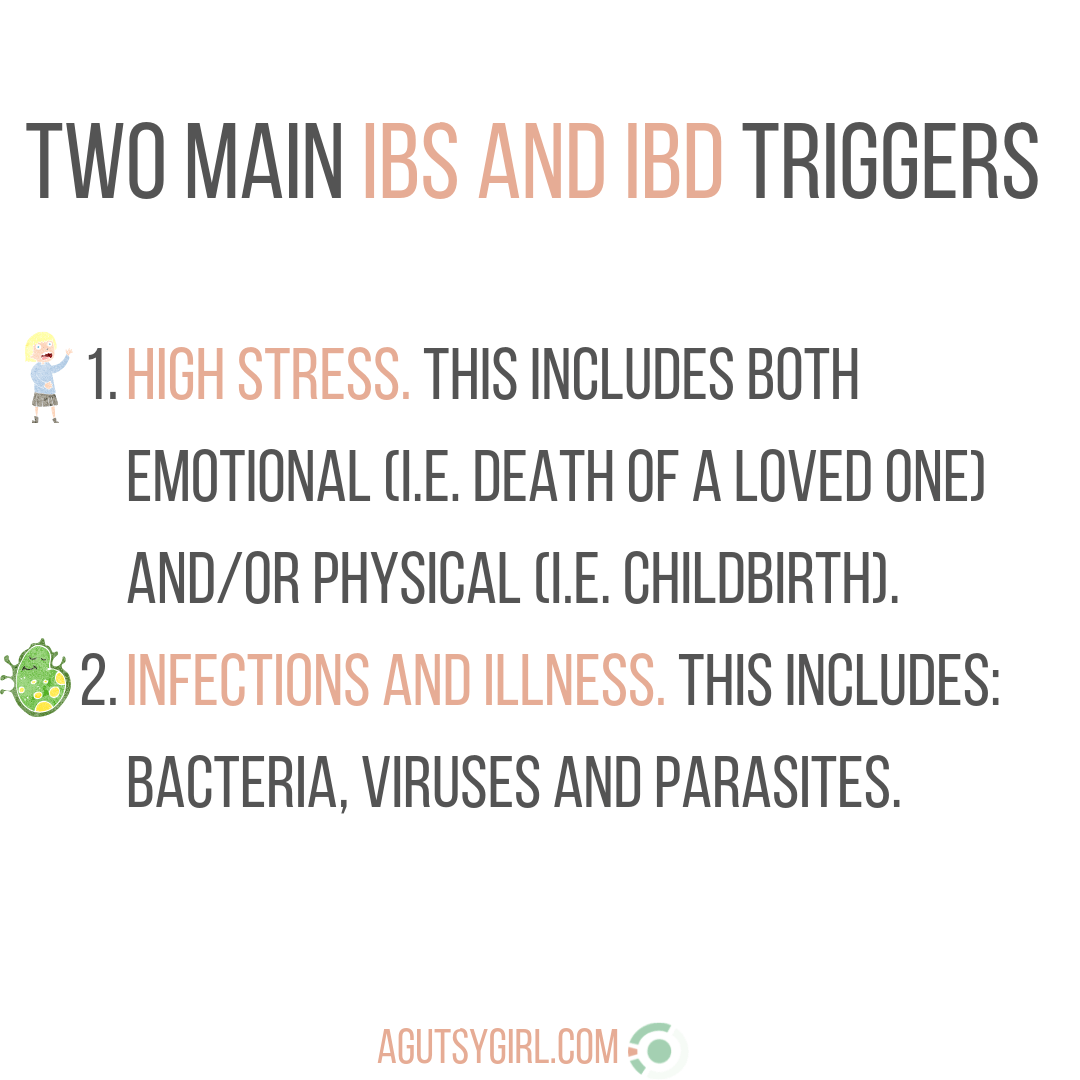 Please don’t misunderstand this post that I think any one of the above happens and severe illness magically appears. That is not what I believe at all.

We either have a genetic or lifestyle component first. The above are simply the triggers to have the issues fully rise to the surface.

Think of them sort of like the straw that broke the camel’s back. Something was building and brewing (maybe for your entire life). And then, one of the two main IBS and IBD triggers occurred and – bam – a seemingly downfall begins.

Your life isn’t over. It just goes back to gut health vs. gut healing.

Think back on your own story. Do you know your trigger? If not, did this help get you one step closer to figuring it out?