It’s a serious question I’m asking you today, “Do you smell like rotten eggs?”

For years, I had no clue what this meant. The first time I ever smelled it was in my solo college dorm room. This was documented in My Story under the “College” time period.

Alternatively, you can now hear me tell this full story in podcast episode 1 HERE.

And if you want the truth, even when I wrote Wicked Winter Squash, I thought it was simply just a matter of food fermenting in the gut.

In fact, it wasn’t until just recently that I could pinpoint it to a ‘T.’ It kind of happened on accident by way of research in combination with my own journal.

I was researching all things hydrogen-dominant SIBO. One of the unique symptoms to hydrogen (vs. methane – which I think produces more of the “barn smell”)-dominant SIBO is a rotten egg smell. You know, the smelly toots, sulfur farts, whatever you want to call them.

Upon further investigation, though, I learned that this is because of that “third” type of SIBO: Hydrogen Sulfide SIBO (H2 SIBO).

I began seeing the correlation between foods I was eating and the days/time when the rotten egg stench was filling the room. 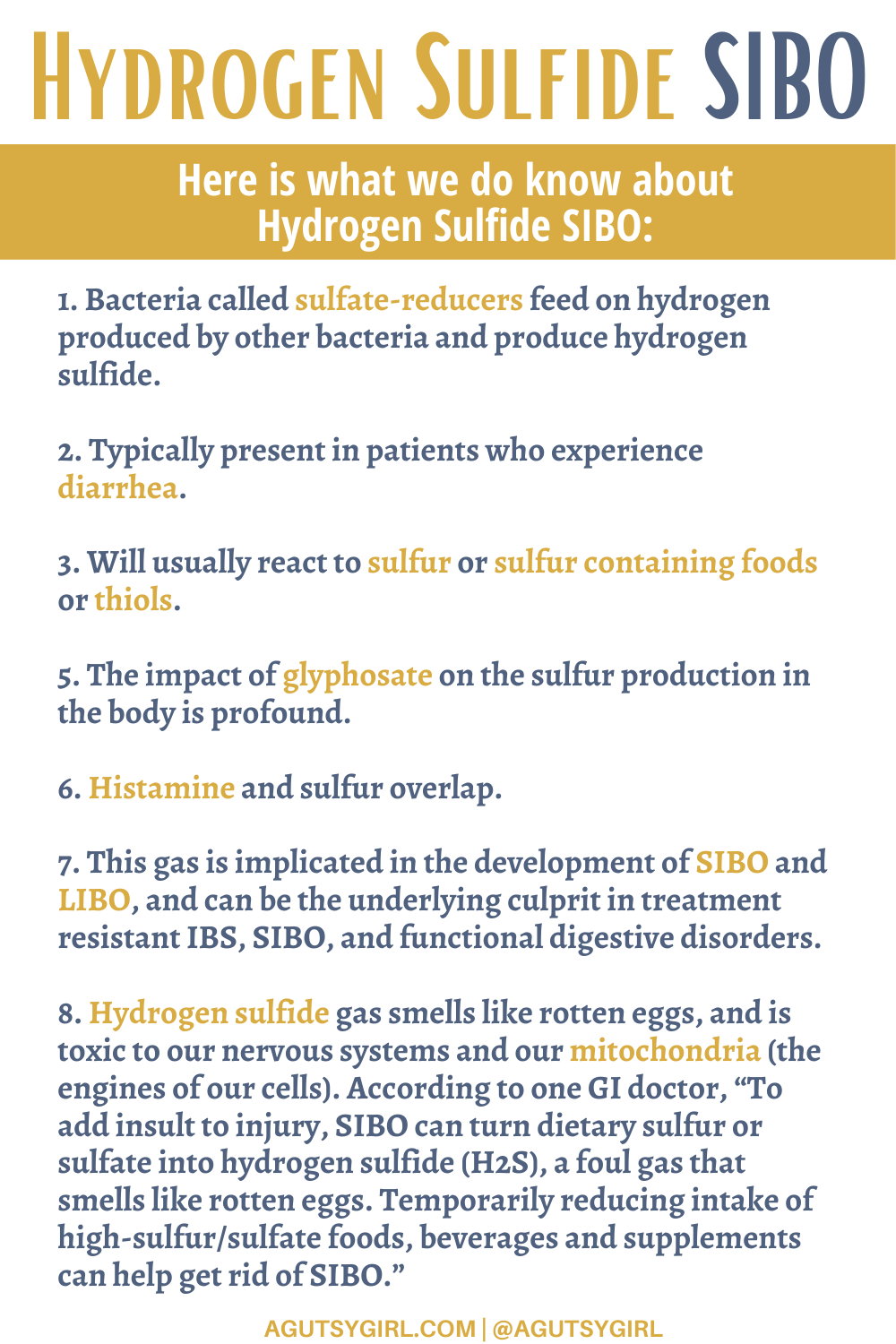 As I noted in the hydrogen-dominant SIBO post, there isn’t a lot that is (currently) known about Hydrogen Sulfide SIBO. Currently, there are no official tests to confirm or deny its existence, either.

{However, there is a breath test at home that can help identify problematic foods. Check out Hydrogen Breath Test at Home HERE.}

Here is what we do know about Hydrogen Sulfide SIBO: 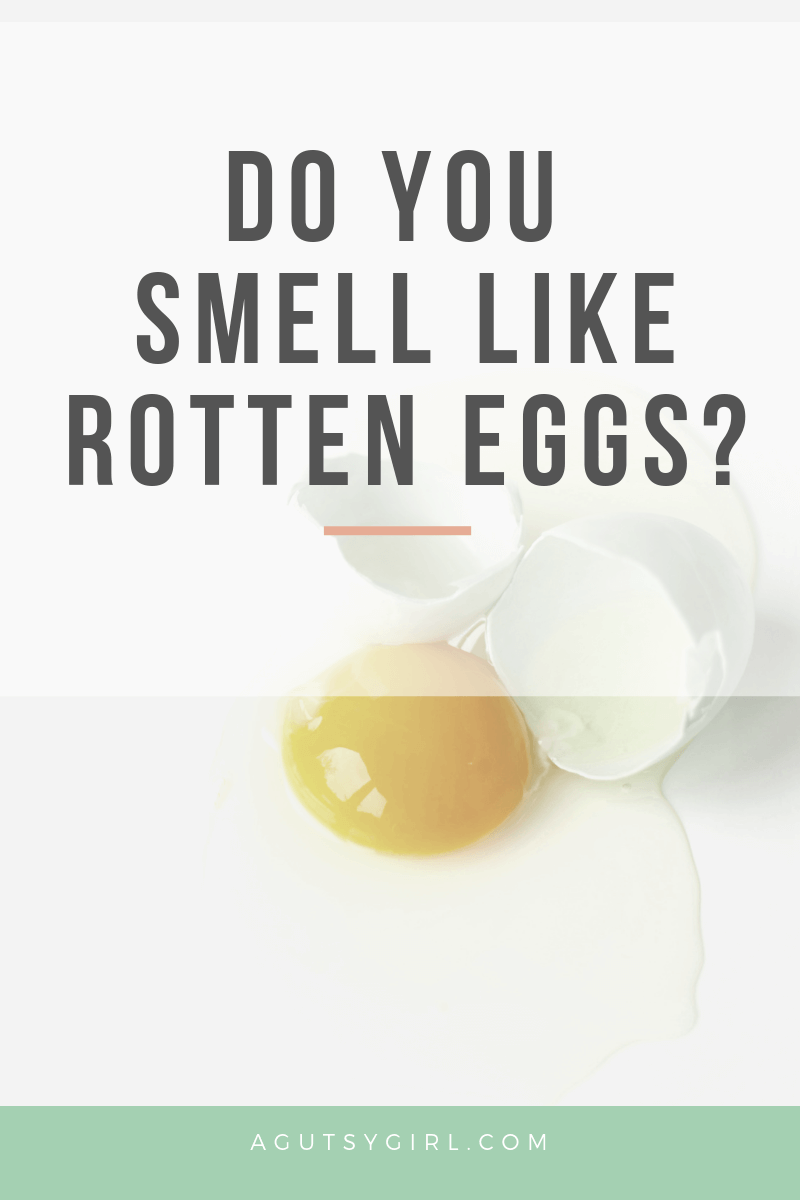 So, if you smell like rotten eggs, Hydrogen Sulfide SIBO could be the culprit. How to determine if you have this third type of SIBO:

Burping? Are they Sulfur Burps?

Remember, one of the signs of an unhealthy gut is stinky breath.

And sometimes, that stinky breath wreaks of rotten eggs.

Similar to the rotten egg smell that can come via gas out of your bottom, burping which smells like rotten eggs is also common.

These are known as sulfur burps, and they are common in those with Hydrogen Sulfide SIBO.

Please make note: These lists below of high and low-sulfur foods are not meant to be exhaustive. In fact, the only food lists I have that are fairly exhaustive are the ones found in The Gutsy Girl’s Bible (i.e. gluten, dairy, beans, corn, etc.). 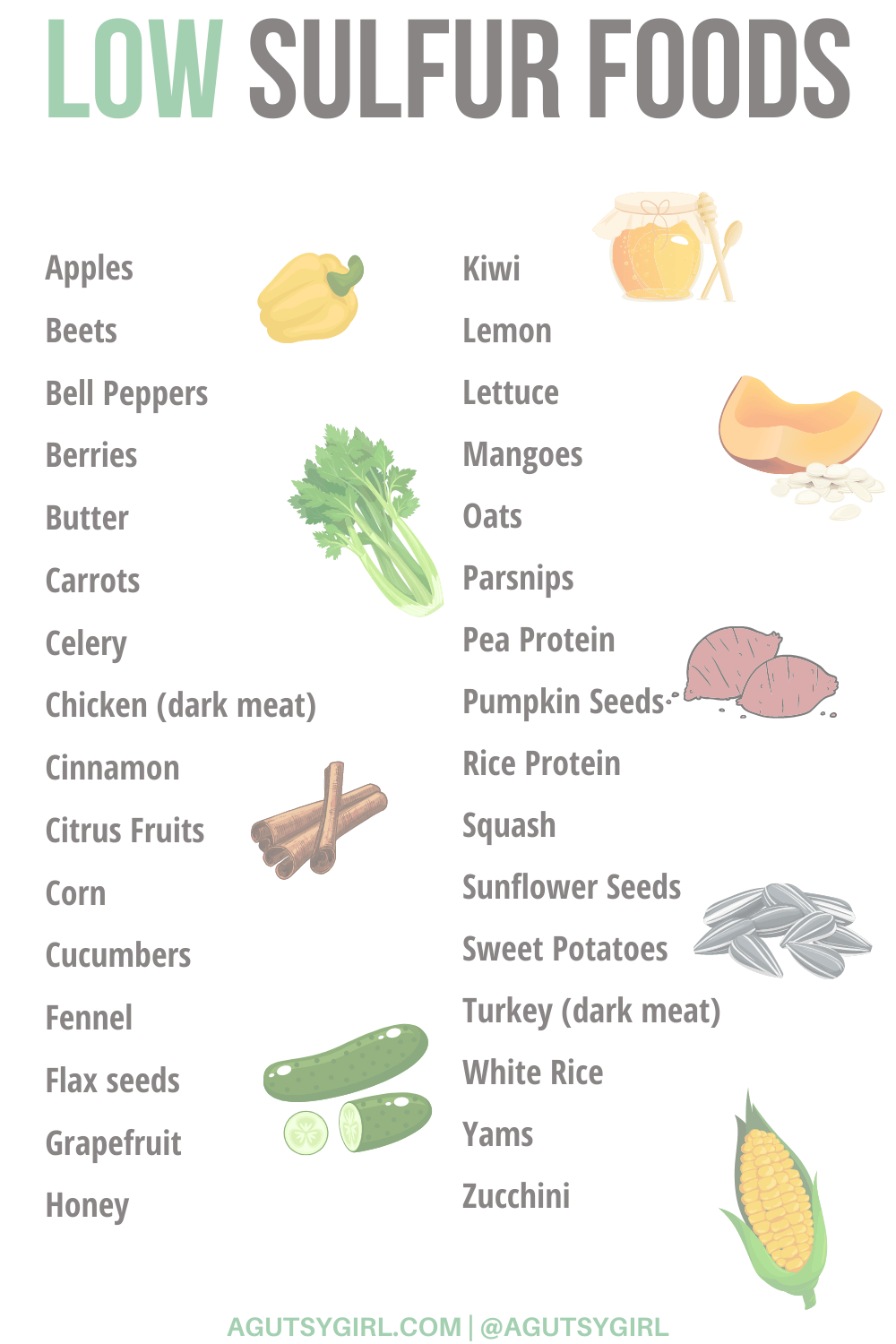 One other thing that’s interesting to note is that Dr. Elena Klimenko gives the following supplements as potential problems for those with Hydrogen Sulfide SIBO.

I’m not telling you to not take these. What I’m saying is that if you’ve been taking any of them and have been keeping track in your journal, you can possibly find some correlations.

Can you see why this can all get so tricky for anyone trying to heal from SIBO? The food lists are super conflicting, and you really need to know exactly what YOU are dealing with versus a templated plan.

My final note on this topic is this: IF you don’t have a problem with sulfur, then for the love of God, do not stop eating it. When you answer, “No” to the question, “Do you smell like rotten eggs,” get out the garlic, onion, and/or eggs, and whip something good up to eat! 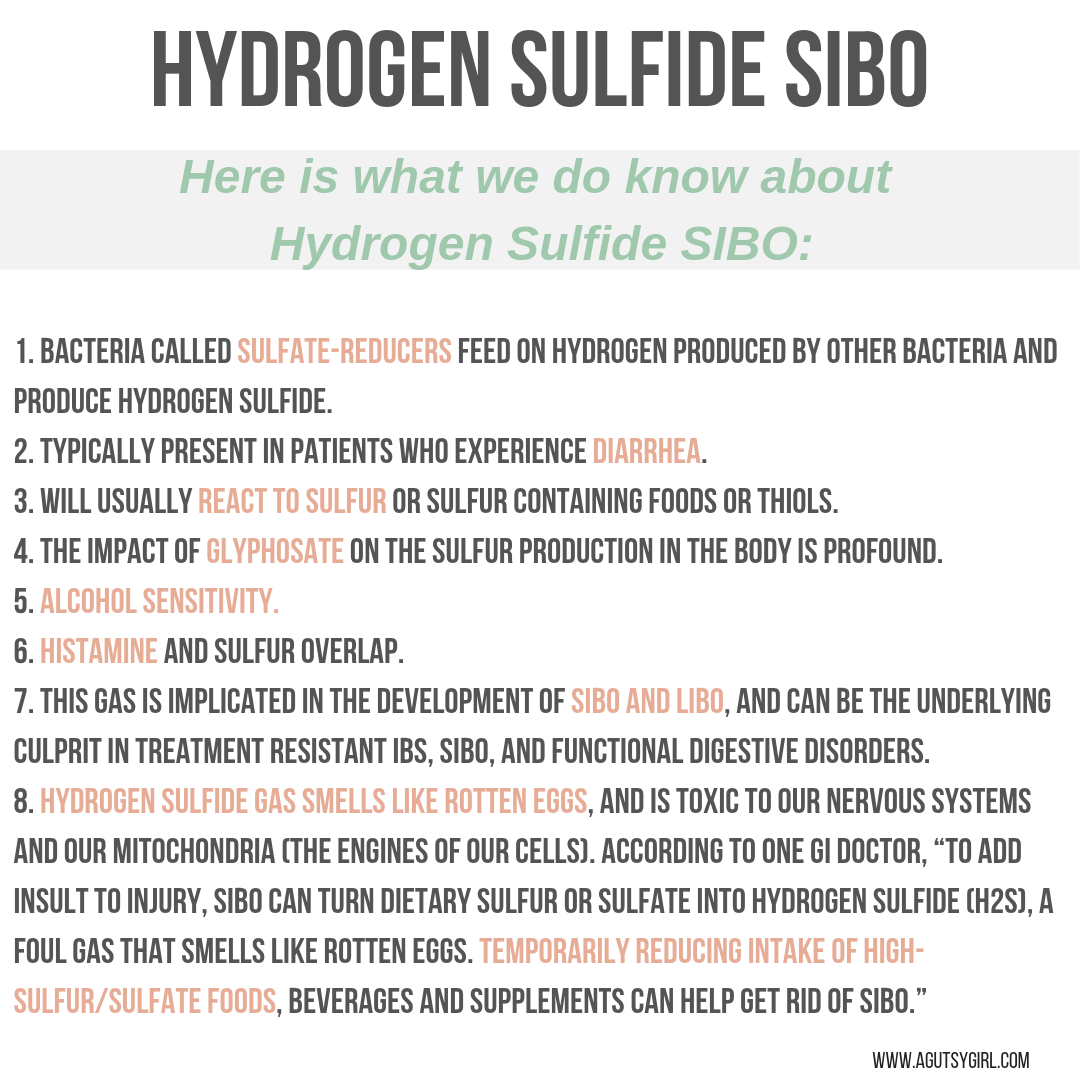 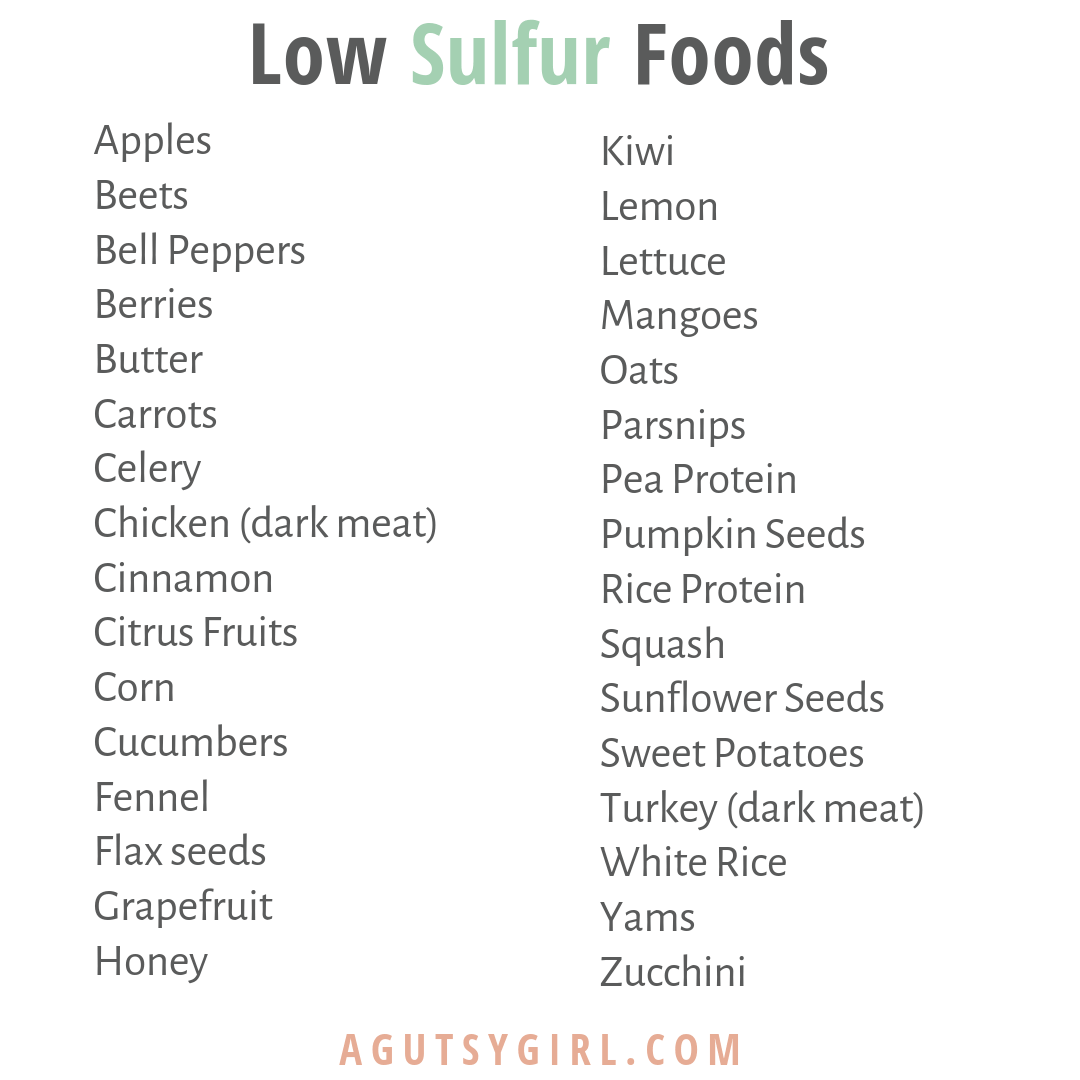 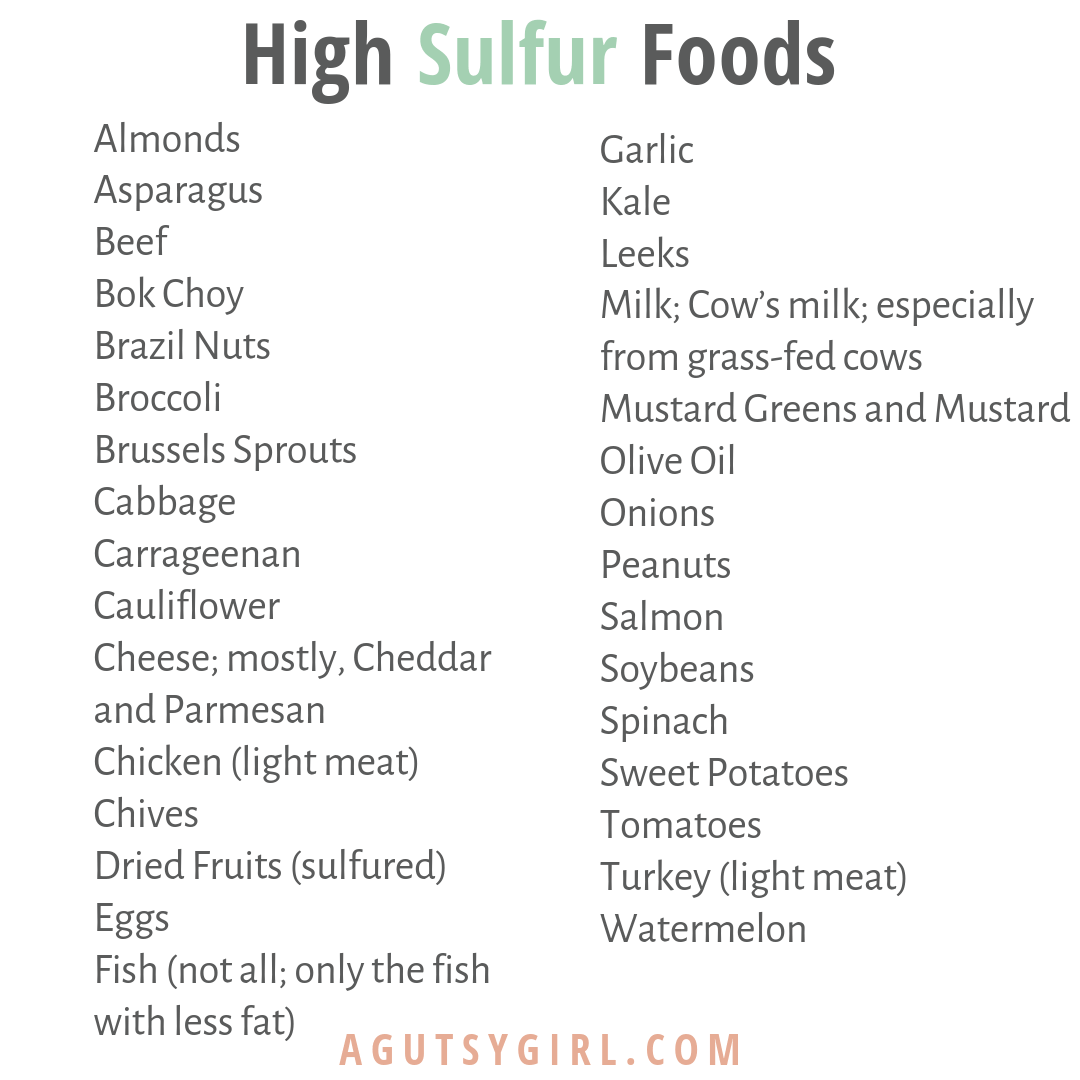