While at dinner in the mountains in Italy one night, Ceci and her family told us we were having a meal known as “Kilometer Zero.”

I gravitated towards the term so much that ever since hearing it, my mind has gone in several directions thinking about how to take it and use it right here in the United States. I decided to start by using the term as the title for this blog post, the one many of you have been waiting around for….food in Italy, what and how I was able to eat all the things while traveling the country. Their Kilometer Zero is basically our “farm-to-table.” In other words, a Kilometer Zero meal is made up of things that traveled “zero kilometers” to get to your plate. (I mean, it’s not literally zero, but you get the picture).

In the mountains that night we had: polenta, sausage links, wild mushrooms, cheeses, bread, dessert, and drinks. Only the polenta was not considered Kilometer Zero. Everything else was from the land right there and the animals they raised which grazed upon that land. I believe this is one of the reasons I was able to eat all the things in Italy, but it’s definitely not the only reason.

Food and Beverage in Italy Here are all (okay most of) the things I learned about food and beverage while in Italy:

Everything I Ate and Drank in Italy

In yesterday’s post on the Top 17 Things from Italy, I mentioned that everyone was asking me prior to the trip, ““What are you going to eat? They eat so much gluten.” While I was scared to go for it (more on that below), I decided that I was going to just live and go for it. If I reacted strongly, I’d pull back. Here were all the things I ate and drank while in Italy:

Why I Believe I Tolerated All The Things 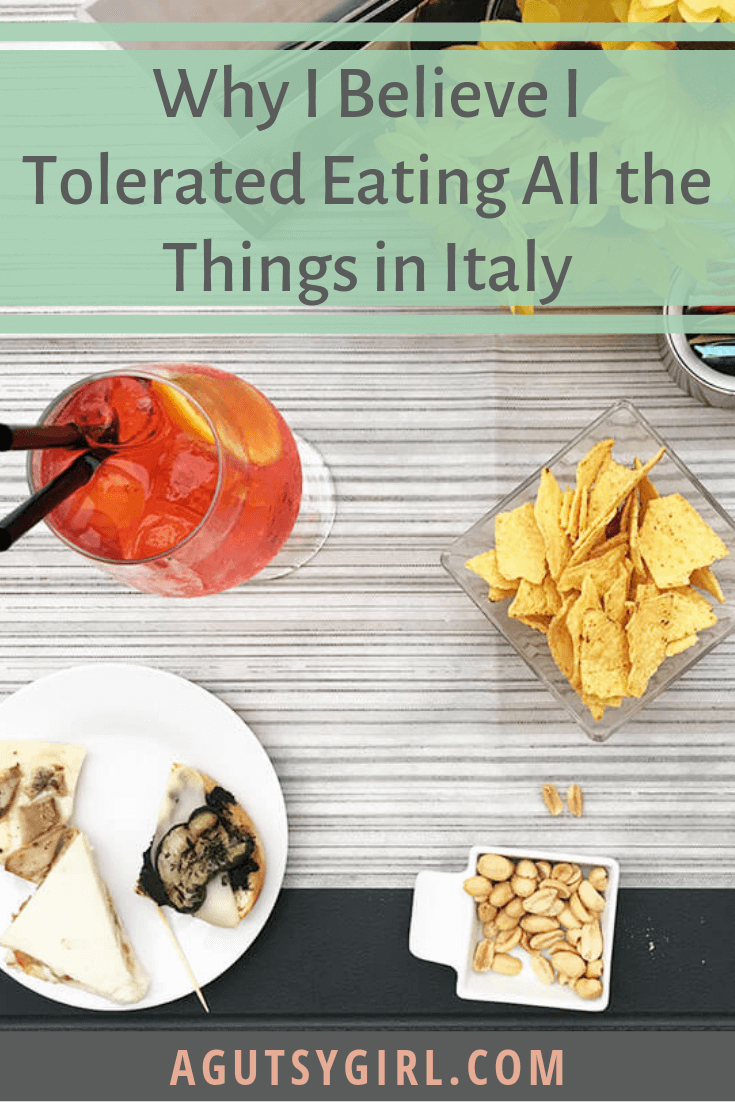 Are we allergic to food or what’s been done to it in America?

We can start here.

In Italy, I think I maybe saw a sign for “Organic” once or twice. It’s not common, and yet, the food quality there (because of the lack of hormones, pesticides, chemicals, etc.) is drastically improved from the standard in America. In fact, I couldn’t get it out of my mind the notion that in Italy there weren’t really “health foods.” I went to two grocery stores and not once did I see an aisle dedicated to “health foods,” “organics,” or the like. And the irony is, of course, that in America we have dedicated an entire industry to it (I would know, it’s the industry I am most passionate about, live, breathe, and work on/with 24/7) yet we continue to be chronically sick and overweight.

However, for me to say that the reason I tolerated all the things in Italy was strictly due to food quality would not be telling you the full truth. And if you want the full truth, here is the primary question I explored while eating and drinking my way through Italy….

Do we feel better when traveling in Italy (or wherever food “like that” exists) because:

And here is what I concluded. While in Italy I had no mouth flares (one night I did get a red dot in my cheek, but it went away quick and was painless – it’s usually from a pizza herb). I went to the bathroom. I barely was bloated, and I made sure to keep that in check by keeping up with my LDN and a few times did the Intestinal Movement (for good measures). There was zero joint pain (which used to be a huge glutenized symptom). My energy was amazing. Skin issues have completely gone away – even all back acne.

And here is what I also concluded during one of my deep introspective moments: What is the point of going back to America to be on a super “strict” diet when clearly traveling through Italy on no diet helped (instead of hurt)? In other words, I essentially just proved to myself that this isn’t only (eh – if at all?) about diet.

If we can’t figure out #2 (“There is significantly lower stress while eating said food) then we’ll never arrive at ultimate healing because in America we simply aren’t afforded #1 (total food quality).

So many of the s#$% ingredients American’s accept as okay are forbidden in Europe, and as long as America doesn’t care, big food gets by with anything and everything.

I thrived while eating and drinking all the things in Italy. I owe all the gratitude to my willingness for seeing that it was about both the food and every single thing I was doing throughout my days there…..eating, playing, praying, loving, being, not-being, enjoying, and mostly LIVING.

Coming back to reality, to the United States, and to my real life, this experience set me up to explore for myself (and to offer the help for my clients) to enjoy these same freedoms from health mis-haps by not just focusing on diet.

And that is the most FREEING thing I have felt in such a long time. Italy….you DID ruin the low-carb strategy. And I totally heart you so hard for it.

Kilometer Zero you’ve done me so, so good. Stay tuned….on the heels of this, I’m sharing with you my Colonoscopy and Endoscopy results.