Good morning! Who is ready for an Apple Cider Latte?

Let’s enjoy it over a little conversation today.

There is something I need to come clean with you about…..gluten. This past June I celebrated 8 years gluten free. Shortly after that, we went to Italy where I ate all the gluten, every single day without effects.

We returned from Italy at the beginning of August, and I was pretty set that gluten would just be for Italy. You know, because while in Italy, eat as the Italians eat. While in America, don’t eat what we eat. You’re laughing because it’s true. But I continued feeling so well, despite feeling major stress in other areas of my life. And because of the other stress, I needed to start telling myself daily health affirmations to avoid a SIBO relapse (which I’ve been meditating on and about while reading Pep Talk – I highly recommend you get it, too),

You are well and healed. You don’t have Colitis, and the SIBO is gone.

And as I’ve been saying it over-and-over, I have believed it with my whole heart. And this, then of course, begged the question,

Then why would I tell myself “No, you can’t have that (xyz goodie with gluten)” on special occasions if I really believed I was healed and well? There is the most incredible pizza place in our town. Gluten. And the Unicorn cake my mom made Samarah for her 5th birthday? Gluten. I had it all. I didn’t think twice about it, nor did I worry about “getting sick from it” because remember that I have been constantly telling myself,

You are well and healed. You don’t have Colitis, and the SIBO is gone. What I am saying is that living life has been totally incredible and I do (and will) have gluten in my personal life from time-to-time. But again, this Apple Cider Latte recipe plus any recipes ever found on this blog will always remain 100% gluten free.

So here we go with a unique spin on the fall latte. Okay, not so unique? I don’t know. I’ve never seen “Apple Cider Latte” written on any menu; maybe you have. I had the idea for this recipe, but if you recall from the post yesterday, knew I needed to figure out the first part of it before adding all the coffee and “milk” to make it a latte.

That, of course, was the Apple Cider. And in case you didn’t read yesterday, I made my own using the trusted Instant Pot. And it’s totally awesome. So go ahead, learn how to make Apple Cider in the Instant Pot, brew a batch, then put the pieces together for your Apple Cider Latte. To make the Apple Cider Latte, all you need are some key things: Apple Cider, “milk,” coffee, Vital Proteins Collagen Peptides, and Monk Fruit (or sugar of choice). 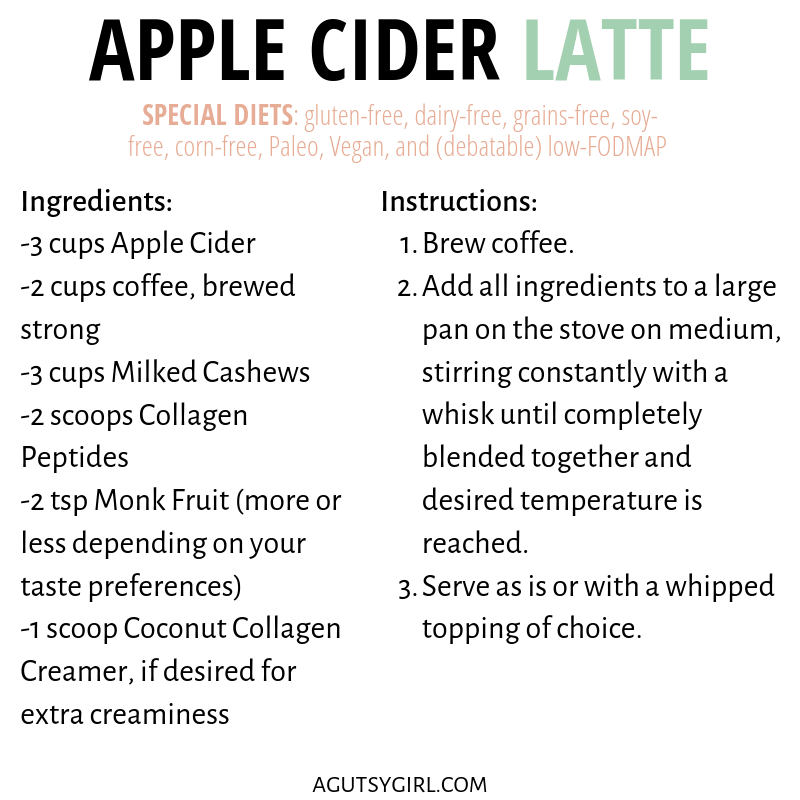 Apple Cider, on its own, isn’t very thick. To get a thicker latte, there are two critical components to add:

If you want to boost this latte’s creaminess (+ health factor) even more, add a scoop of Vital Proteins Coconut Collagen Creamer. It features healthy ingredients served alongside 10 grams of collagen peptides sourced from grass-fed, pasture-raised bovine. It’s an optional add-in to the latte, but I did, and I would do it again.

p.s. Can we also please just take a moment to adore these spoons? Print
Apple Cider Latte
Author: Sarah Kay Hoffman
Recipe type: Beverage
Cuisine: American
Prep time:  5 mins
Cook time:  3 mins
Total time:  8 mins
Serves: 2-3
A homemade Apple Cider Latte that's free from gluten, dairy, grains, soy, and corn. It's Paleo, Vegan, and (debatable) low-FODMAP.
Ingredients
Instructions
Notes
I have made this recipe both with a whisk and with my Nestpark Portable Drink Mixer. I think homemade lattes are best with the Nestpark because you can get them frothier.
3.5.3251 I’d love to hear from you about eating gluten from time-to-time. Do you? Don’t you? Why or why not? Disclosure: This post is a paid partnership with Vital Proteins. All opinions stated here are 100% my own. I appreciate your support, as this compensation helps with expenses to keep this blog up and running, and for me to continue sharing all that I can with you. For my full disclaimer and disclosure click HERE. Thank you for your support!