I was inspired to write this post when a friend asked, “What is allulose, and what do you think about it?”

“Well,” I said, “I’m actually not sure. If it’s an alternative sugar, then it’s a nonnutritive sweetener. So let me put together a post where I can include it.”

I’ve been wanting to put this post together ever since I read The Paleo Approach: Reverse Autoimmune Disease and Heal Your Body. Starting on page 120, she discusses nonnutritive sweeteners.

Diving into this topic was a huge undertaking, but here we go….

What is a Nonnutritive Sweetener?

Might as well start with what a nonnutritive sweetener is so we’re all on the same page.

Table sugar (sucrose, the scientific name for it) is a nutritive sweetener. This means that it provides nutrition.

Calm down! I realize that we don’t think of sugar as being nutritious; that’s not what I’m saying. What it means is that it contains calories and provides energy in the form of carbohydrates.

Zero- or low-calorie alternatives to nutritive sweeteners, such as table sugar. These sweeteners can be added to both hot and cold beverages and some can be used for baking. Nonnutritive sweeteners are much sweeter than sugar so only small amounts are needed. They provide fewer calories per gram than sugar because they are not completely absorbed by your digestive system.

Some other things about Ace-K:

Brand names: currently none (because there are none, it is only currently available to the commercial and food ingredients market)

Advantame is chemically similar to aspartame (Equal). And here are some other things to know about it:

Aspartame is very popular. If you eat “diet” foods, chances are you have consumed it within the past 24 hours. Aspartame includes: aspartic acid and phenylalanine. Both are naturally occurring amino acids. And when the body processes aspartame, part of it breaks down into methanol.

Here are some thing so to know about aspartame:

It is purely based on sucrose from sugar beet. It is a natural occurring disaccharide composed of alpha-1,6-linked glucose and fructose.

Here are some other things to know about it: 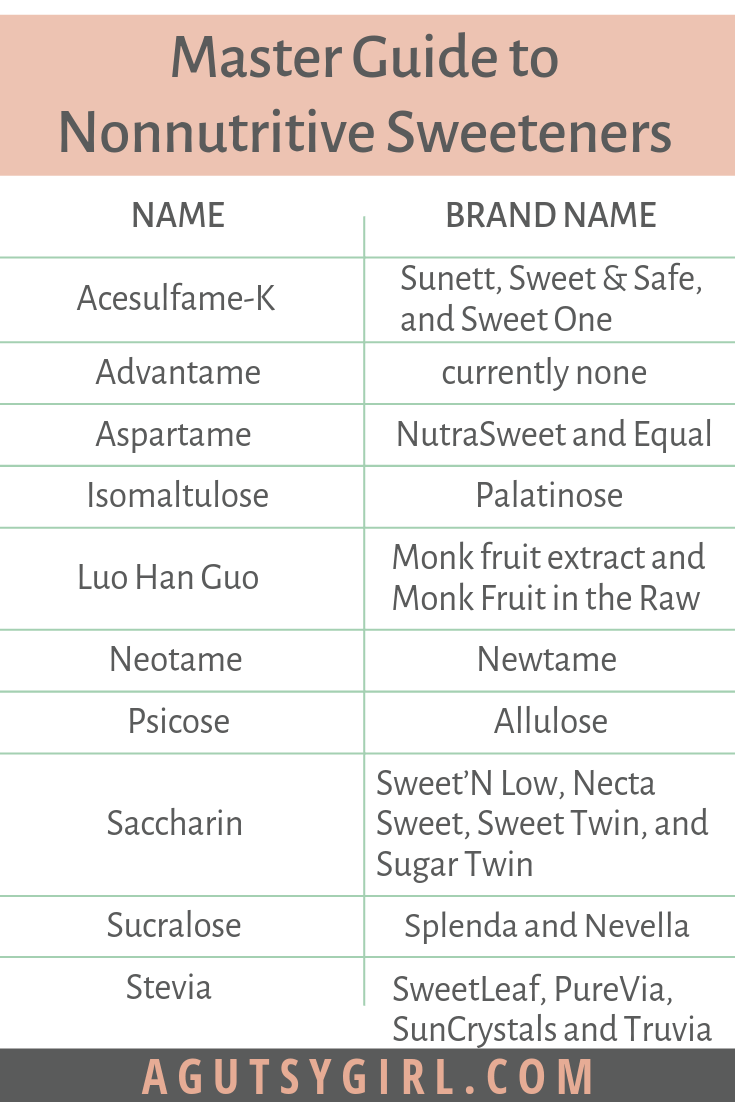 Luo han guo is a very sweet and round dried fruit typically grown in southern Chinese provinces such as Guangdong, Guizhou, Hunan and Jiangxi. In the U.S., luo han guo or monk fruit is Generally Recognized As Safe (GRAS) for use as a sweetener or flavor enhancer for food and beverages, excluding meat and poultry products.

Here are some other things about luo han guo:

The Lakanto brand monk fruit sweetener is one that I talk about and use frequently. The ingredients in it are: erythritol and monk fruit extract. Some can’t tolerate the erythritol, but because I use small quantities, I’ve never had a problem.

I do however have problems with Stevia when I have too much.

We buy the Classic Lakanto Monkfruit Sweetener. If you click HERE to grab it, you can use my code AGUTSYGIRL at checkout to save 15%.

Note: A study was done that stated erythritol is less likely to cause digestive issues than xylitol.

Neotame, also known by the trade name Newtame, is a non-caloric artificial sweetener and aspartame analog by NutraSweet.

Here are things to know about Neotame:

Yes, this one is for you, darling friend!

D-Psicose, also known as D-allulose, or simply allulose, is a low-calorie monosaccharide sugar used by some major commercial food and beverage manufacturers.

Here are some things to know about the allulose sweetener:

Saccharin was discovered in the 1870’s by Ira Remsen and Constantine Fahlberg, researchers at Johns Hopkins University. It is about 200-700 times sweeter than sugar.

Some things to know about saccharin include:

Sucralose is a zero-calorie artificial sweetener, and Splenda is the most common sucralose-based product. It is made from sugar in a multi-step chemical process in which 3 hydrogen-oxygen groups are replaced with chlorine atoms.

Other things to know about sucralose:

I have had periods where I was obsessed with stevia, consuming it on the daily.When my gut was a mess, though, I noticed a correlation between stevia and cystic back acne. For a long time, I cut it out of my diet completely.

Today, I consume it in small amounts, from time-to-time.

Stevia is an intensely sweet-tasting plant with uses for sweeten beverages and make tea since the 16th century. The plant is originally native to Paraguay and Brazil but is now also in Japan and China. You’ll see it as a non-nutritive sweetener and herbal supplement.

Here are more things to know about stevia:

Another common nonnutritive sweetener is the Swerve Sweetener. This product is another alternative sweetener that claims to not have the “bitter aftertaste associated with other sweeteners like stevia and monkfruit.” (Side note: I do think stevia has an aftertaste, but I do not think monkfruit does.)

Their most basic product, the granular, contains these three ingredients: erythritol, oligosaccharides, and natural flavors. This product replaces regular sugar 1-to-1 in recipes.

Finally, natural flavors are the third ingredient. It may or may not be okay for you. The term is ambiguous and mammoth. Read more about natural flavoring HERE.

Are Nonnutritive Sweeteners OK to Consume?

After all my research, this is the conclusion:

The dose makes the poison.

And I have correlated my conclusion to the LDN I take on a daily basis.

Naltrexone HCl was approved by FDA in 1984 for the treatment of opioid addiction. The typical daily dosage for opioid addiction is 50.0–100.0 mg daily, and 50.0-mg tablets are available commercially.

In lower doses, LDN (Low Dose Naltrexone) (in most published research this is 4.5 mg – exactly what I take), “exhibits paradoxical properties, including analgesia and anti-inflammatory actions, which have not been reported at larger dosages.”

That said, I’m still not confident that the dose which the FDA deems OK is actually OK.

Research reveals that many nonnutritive sweeteners impact gut bacteria and the lining of the intestines.

But on the other hand, on the basis of the data reviewed it was concluded that the use of isomaltulose as an alternative sugar is as safe as the use of other digestible sugars consisting of glucose and fructose.

Scientists are curious over the fact that artificial sweeteners do not seem to assist in weight management. The effect of promoting glucose intolerance may explain the issue.

While I do not prescribe to the theory that consuming even minute amounts of nonnutritive sweeteners completely destroys the gut and can contribute to a cause of cancer, I DO believe in the correlation.

Multiple studies (below) have confirmed it, though more research needs to be done. And it’s not just the multiple studies – just think about all the gut imbalance and increasing cancer rates, even with the ultra-healthy “diet” culture. Coincidence? I don’t think so, but you can decide for yourself.

What are Some (Good) Alternative Natural Sweeteners (to Nonnutritive Sweeteners)?

There are many forms of natural sweeteners. Here are some to consider:

But don’t kid yourself, sugar – both natural and artificial – is far more than what has been discussed today.

In fact, if you want 192 Sources and Alternate Names for Sugar, grab them HERE.

If you’re trying to heal your gut and have a sweet tooth, you might want to check out Gut Healing with a Sweet Tooth HERE.