Even if you have a chronic illness, dieting harder is most likely not the answer.

I shared my post on the 30-Day AIP Protocol. A woman commented,

Yes and it helped but didn’t solve my gut issues. Turns out I have a sucrose intolerance. But AIP helped give me some answers to get closer to that conclusion.

To which I responded,

Glad you figured it out. I think that’s so true in general. People tend to do FAR more, diet wise, than what they need to be doing. If an answer isn’t found, “dieting harder” is usually not the answer:)

And she ended with,

Yes, after 29 days, my GI said if this hasn’t solved your digestive issues, it’s not the answer and it’s way too restrictive-time to re-evaluate. I can see how ppl could get sucked into further cutting things out though to try to find a solution. In The Gutsy Girl’s Bible: an approach to healing the gut, 3.0, it’s just 21 days of removing all the things to help you begin to find the answers you might have been seeking.

It is not meant to be anything that carries out months and months.

I truly believe that if you have never tried changing your diet and lifestyle to begin finding answers to lingering gut issues, then this is the perfect place to start.

But I also believe that if you have no answers after those 21 days then dieting harder is definitely not your answer.

The very first time I ever had huge success with a diet that changed my gut status was in 2009 on the GAPS Diet. Day 1 was on August 3, 2009. You can read about it via my old blog HERE. But even on day 1 I had zero bloat, and I would stay like that the entire time on the GAPS Diet.

I knew I was onto something then, but later when I added more things in, I felt the bloat again.

And here’s the thing, after the GAPS Diet, to be perfectly honest, there was absolutely, positively no way I could have gone through with dieting harder to get better results. If you know anything about GAPS and/or have done it yourself, you know that it’s as stringent of a protocol as they come.

Dieting harder would have never gotten me to the SIBO answer. Only testing could do that.

Click HERE to save these two reasons for later. 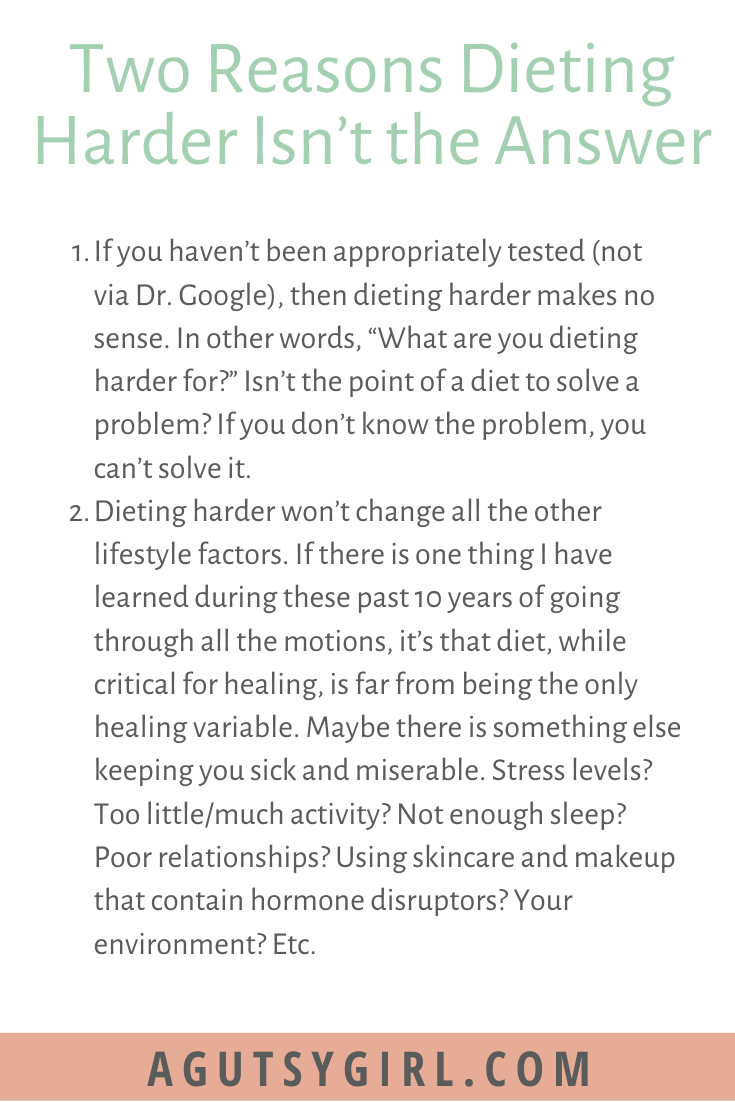 If a gut-healing protocol/diet helps you feel better, then you know you’re onto something. But you sure as h#$% don’t have to engage in dieting harder to solve every last outstanding problem.

And there are two main reasons for this:

The dieting harder willpower you do or don’t possess will not be “the one thing” in the end that makes or breaks your path to long-lasting healing. There is a huge percentage of the chronic illness population who have this willpower, and if simply dieting harder were the answer, almost everyone would be healed.

This past weekend, our family spent the weekend in Northern Minnesota on the lake with Ryan’s family. Nothing but family, laughing, sunshine, the outdoors, joy, and……all the eats. I ate approximately 7.2 million Veggie Straws and had the classic summer S’more bite. Zero stomach issues.

Dieting harder would never take me from feeling 95% well, 85% of the time to 100% well, 100% of the time. Focusing on all the things outside of diet is my main prerogative these days, and if you’ve never tried it, start today.

p.s. Have a lot of weight to lose and are dieting? I also don’t believe that dieting harder is your answer, either. And that’s a whole other topic for a different day. By the way, if you like this stuff, consider coming on a FREE 21-Day Gut Healing Inspiration Journey HERE.