I am asked about a lot of diets as they relate to SIBO. Currently, the one I’m asked most frequently about is, “Will the keto diet help if I have SIBO, should I start using a keto diet?”

Let’s start with the basics.

What is the Keto Diet? According to Healthline, there are several versions of the ketogenic diet, including:

This is a very low-carb, moderate-protein and high-fat diet. It typically contains 75% fat, 20% protein and only 5% carbs.

This diet involves periods of higher-carb refeeds, such as 5 ketogenic days followed by 2 high-carb days.

This diet allows you to add carbs around workouts.

This is similar to a standard ketogenic diet, but includes more protein. The ratio is often 60% fat, 35% protein and 5% carbs.

Only the standard and high-protein ketogenic diets have been studied extensively.

I wrote an entire article on the keto diet, and if you want it broken down even more, click HERE to read about: what it means to be “keto,” reasons to choose the ketogenic diet, and (vegetarian) ketogenic foods.

I also have, read, and do recommend (for information and recipes) Maria Emmerich’s book, “The 30-Day Ketogenic Cleanse: Reset Your Metabolism with 160 Tasty Whole-Food Recipes & Meal Plans.”

But the question at hand is,

Will the keto diet help if I have SIBO?

My answer is yes. But it’s also “caution.” Here’s why.

Will the Keto Diet Help if I Have SIBO?

Will the Keto Diet Help if I Have SIBO? –> Yes.

Harvard Health says, “Because it lacks carbohydrates, a ketogenic diet is rich in proteins and fats. It typically includes plenty of meats, eggs, processed meats, sausages, cheeses, fish, nuts, butter, oils, seeds, and fibrous vegetables.” If taken out of context, then with most of the diet laid out, yes, yes it would help because (other than some of the nuts and fibrous vegetables) all of those foods are low-FODMAP. They are also Paleo, GAPS, and SCD approved (all of which have also been used as SIBO healing protocols), and (again with the exclusion of a few) also AIP approved.

Doing a keto diet is almost sure to starve rotten gut bacteria (as long as you’re not consuming FODMAP foods) because there really are no starches and long-chain carbohydrates there to feed the bacteria.

When done right, my answer is that yes, yes the keto diet can help if you have SIBO.

But not so fast.

Will the Keto Diet Help if I Have SIBO? –> Caution. 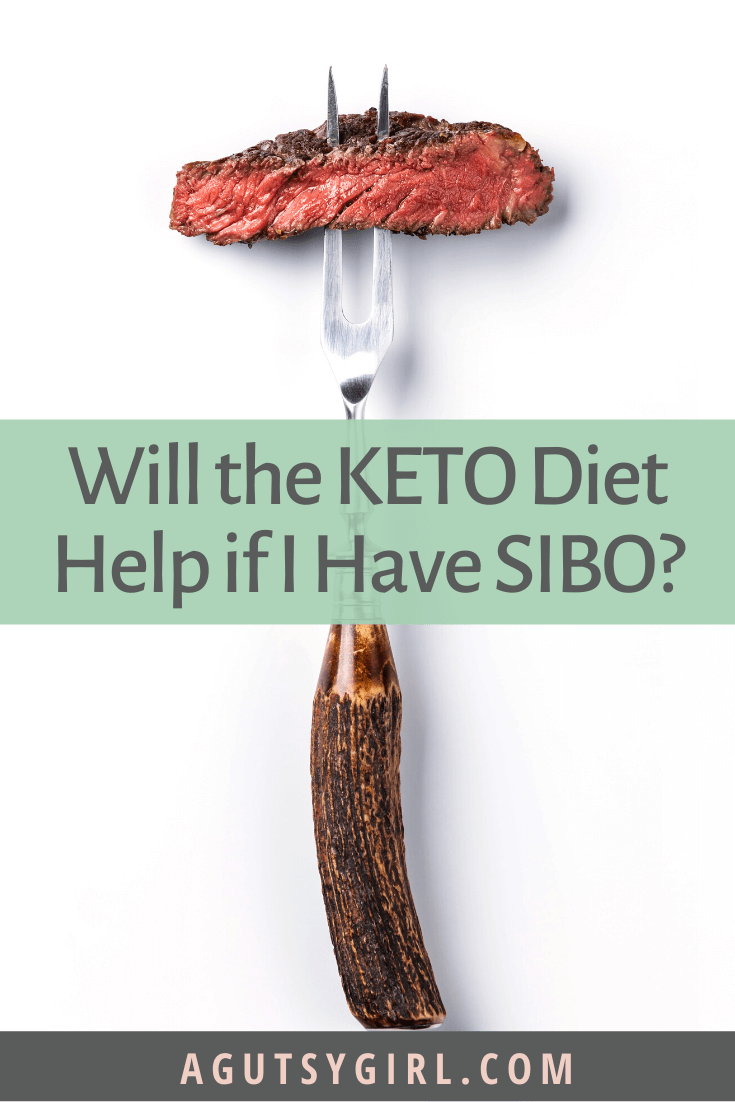 When I first started writing and researching for this post, I wanted to say a definite, “No. No the keto diet will not help if you have SIBO.”

But I just can’t because I don’t actually think that’s true. If you search around the Internet, you’ll see just how much success those with SIBO have had when they have implemented a real, true, and lasting ketogenic diet.

In 2009, when I first began healing my gut, I went through a stringent period of GAPS. And it was almost 100% keto looking back.

For months and months I lived off meat, fat, and broth. All my symptoms and issues went away (and this was long before I knew it was SIBO).

I had zero digestive issues and felt the best I had in years.

I’m living proof that yes it can and yes it does work.

Out if it, new and other problems can arise. I’m also living proof of this, which is why I would not be doing you any favors if I didn’t caution it.

2009-2013: On an off of GAPS; minimal carbohydrates, starch, etc. (Prior to and during this time period I was straight up destroying my hormones with various things).

2014: Sicker than ever. Diagnosed with low-Thyroid, severe Adrenal Fatigue and SIBO.

2014 – 2017 / early 2018: Back-and-forth with different diet protocols, but after the initial 2014 diagnosis and getting to a good place, I went back to eating all the carbs and less protein and fat (I was so burned out by that point).

Early 2018: My nutrient levels were not great, but hormones and adrenals drastically improved.

Today: I just eat. I follow no diet. I try to get a balance of everything, without going massively carb / starch heavy (but am far above the keto limit). And my numbers? Everything is back within range; SIBO at bay.

Updated in late 2020 to add: Today I follow zero diet with zero restrictions. I am healed. 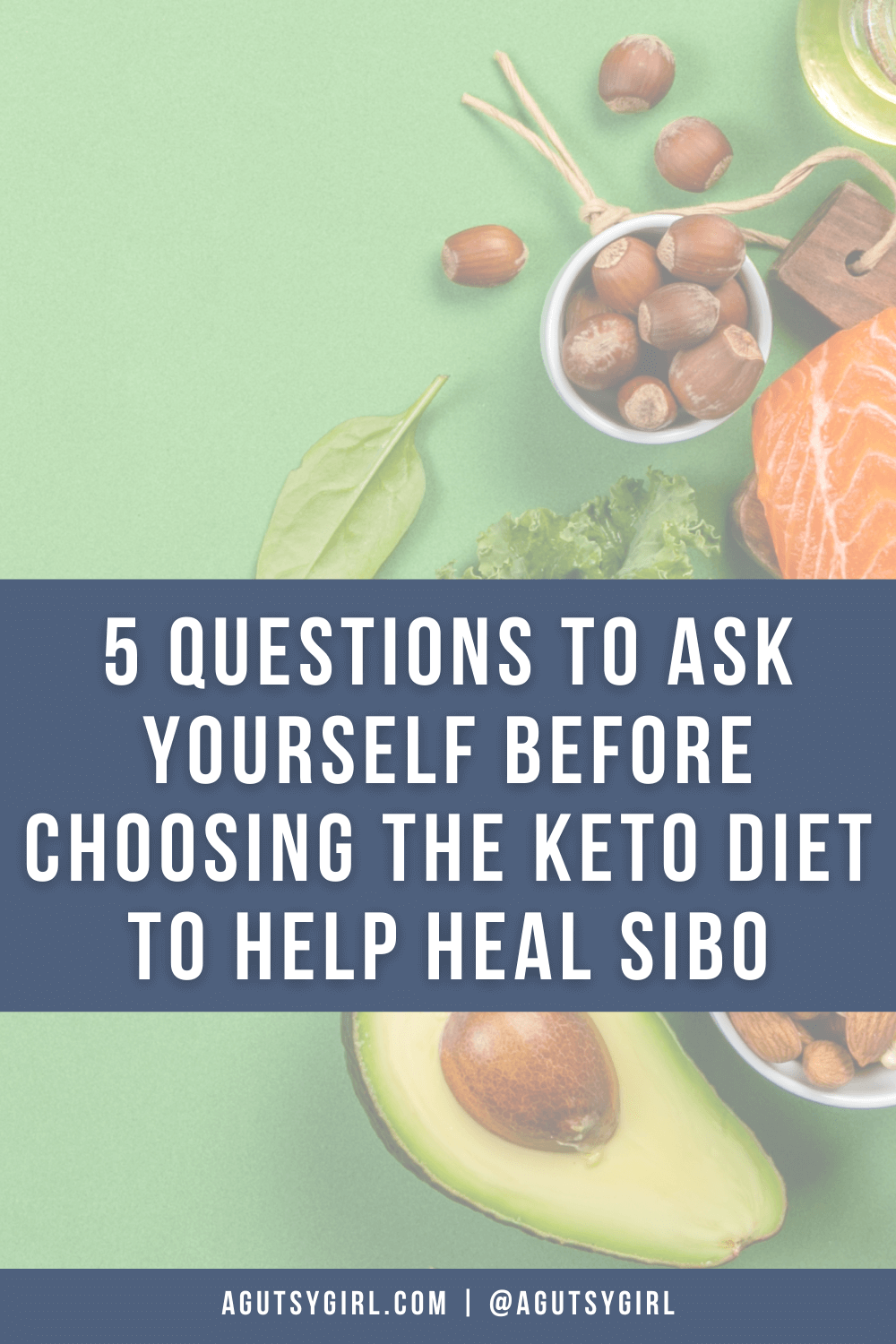 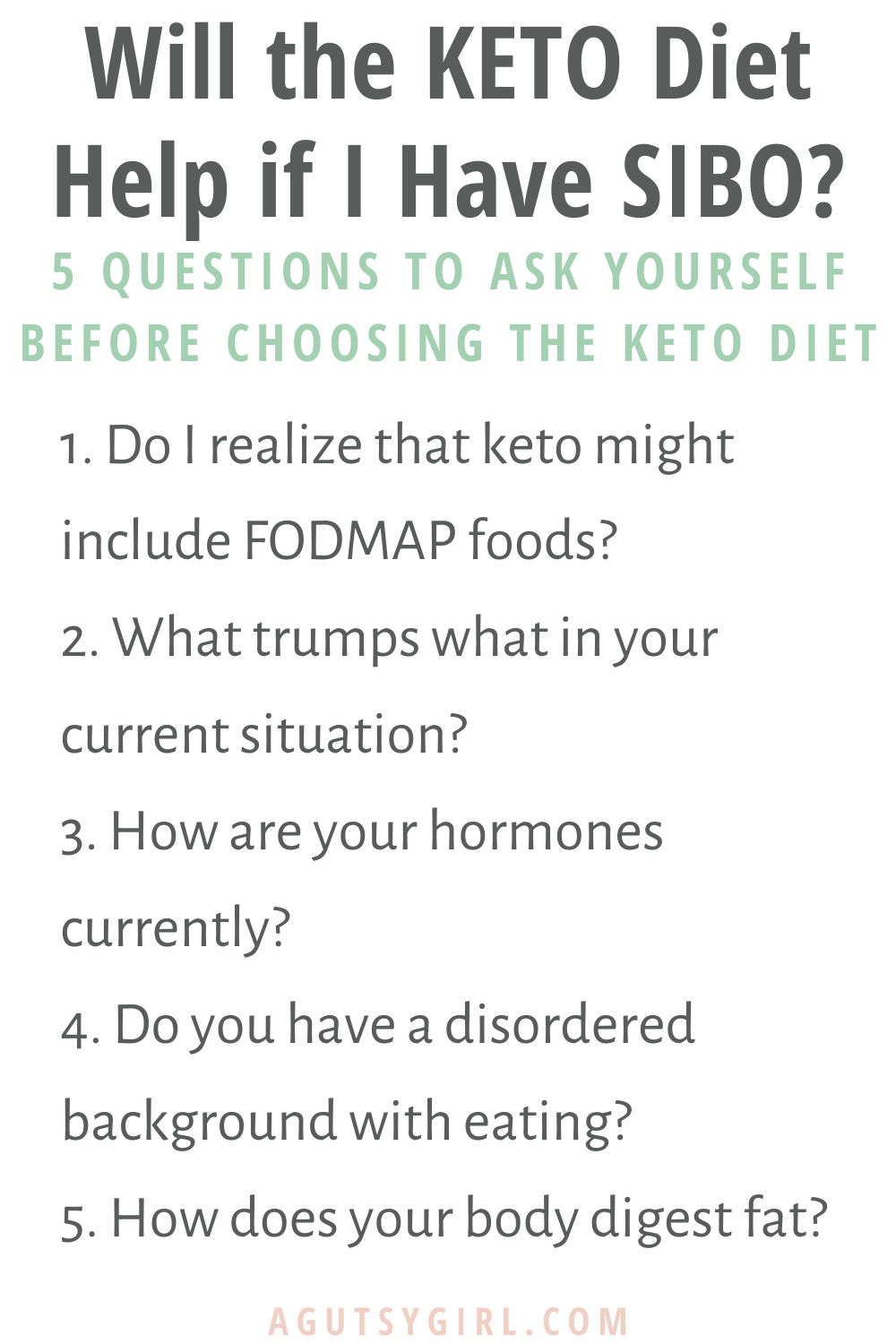 If after answering those five questions, any one of them is having you question a decision to move forward with the keto diet for healing SIBO, I have some alternatives to consider.

By the way, you can get very clear on the answers to the above by keeping a 90-day food journal. This journal was created to set you free, faster.

Alternatives to the Keto diet for SIBO 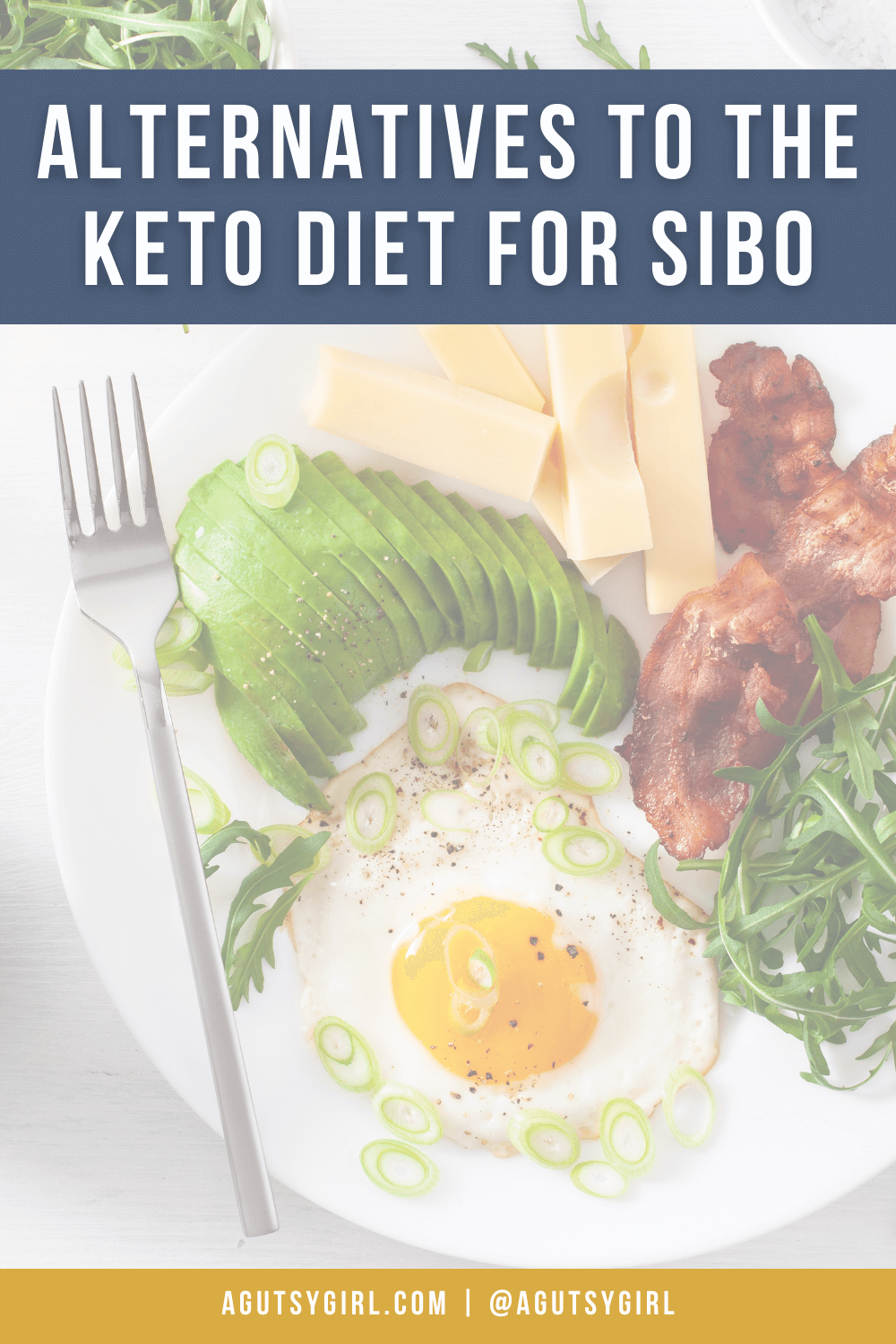 p.s. Many of these are described and talked about at length in The Gutsy Girl’s Bible: an approach to healing the gut. 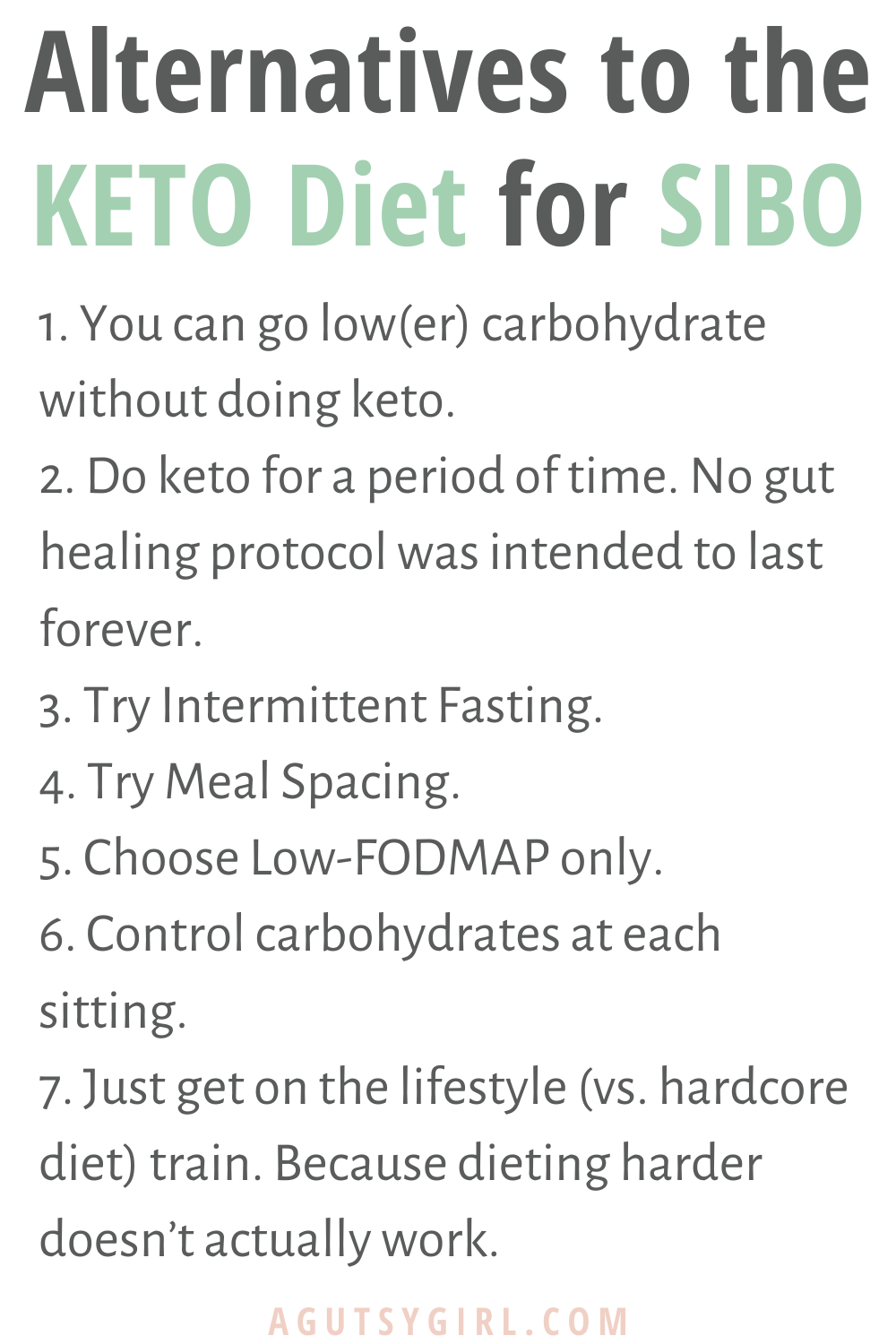 In 2015, Kelsey Marksteiner wrote a great post on Chris Kresser’s site called, “Why Dieting Alone is Not Enough to Treat SIBO.” In the article, she states,

Simply put, a low-FODMAP or low-carb diet does not eradicate an overgrowth in the small intestine in a short period of time, and continuing on a long-term low-FODMAP/carbohydrate diet in an effort to starve the bacteria to death has potential detrimental effects on the bacteria in the large intestine.

I believe that Kelsey is spot on in that dieting alone is not enough to treat SIBO, but I also believe that when you are in gut h$$% anything – ANYTHING – that makes you feel better and find relief in the short term is a viable option. (One cannot understand this until you’ve lived through that own, personal h#$%).

Listen, if diet was the thing for healing SIBO forever, I would have nailed it at the beginning.

I am killer when it comes to following every last thing to a “T,” keeping on task, and maintaining my perfect attendance for the Type A leadership team.

I’m not kidding, so I’ll say it again…..if diet was the thing for healing SIBO forever, I would have nailed it at the beginning.

Healing SIBO requires 100% customization for you – not anyone else.

Your turn: keto for healing SIBO; yes or no or maybe so? I’d love to hear about your thoughts and experiences. (And by the way, there is no right or wrong answer. Promise.) 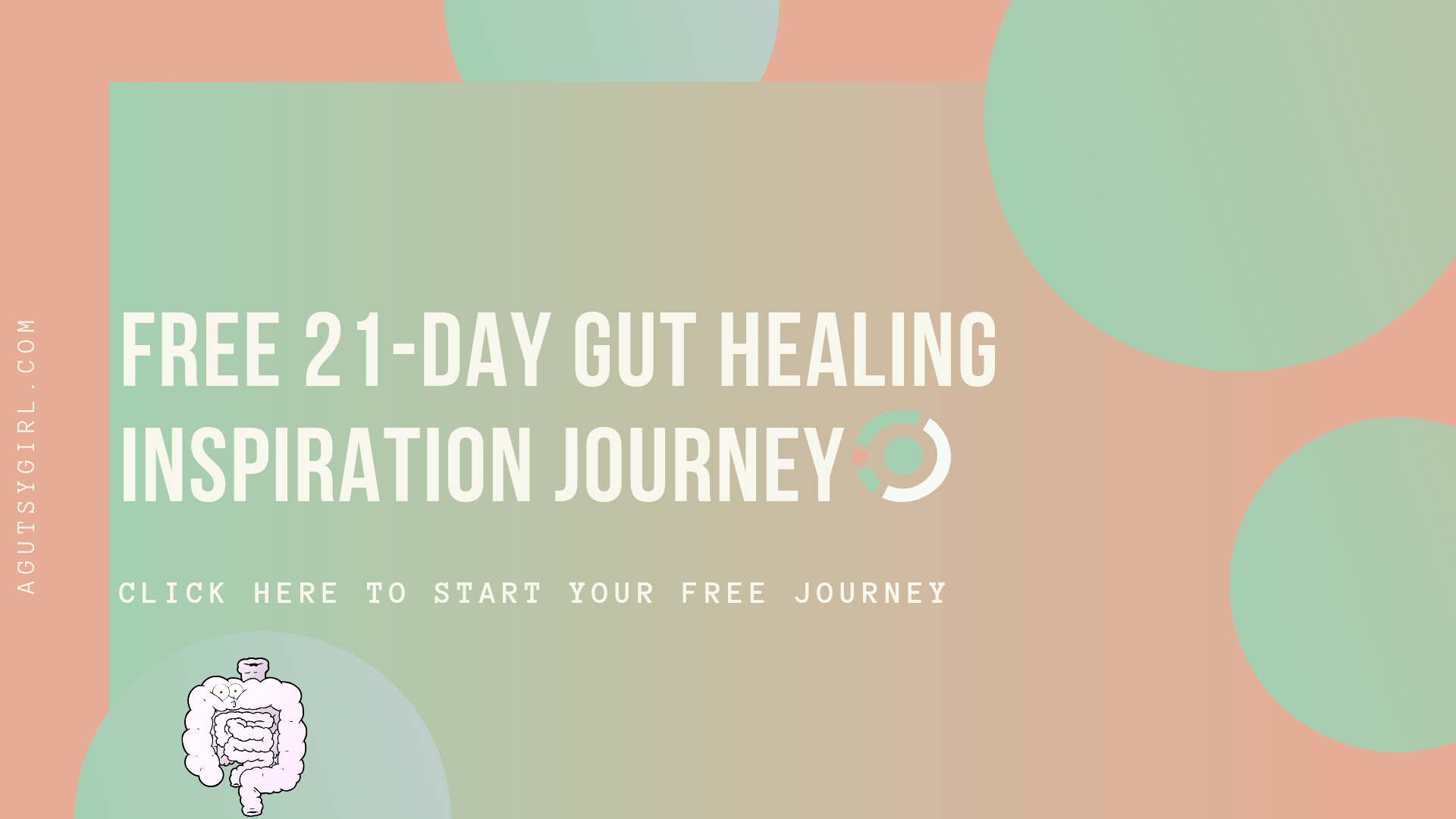 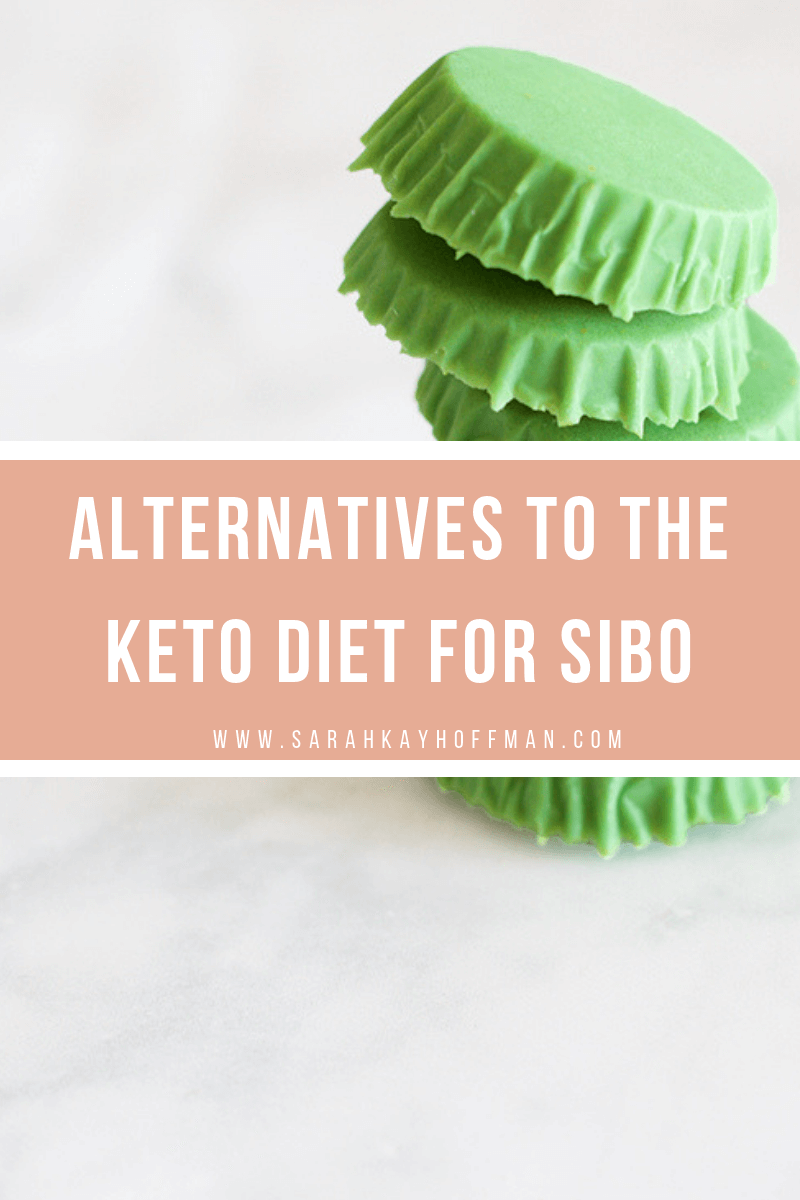 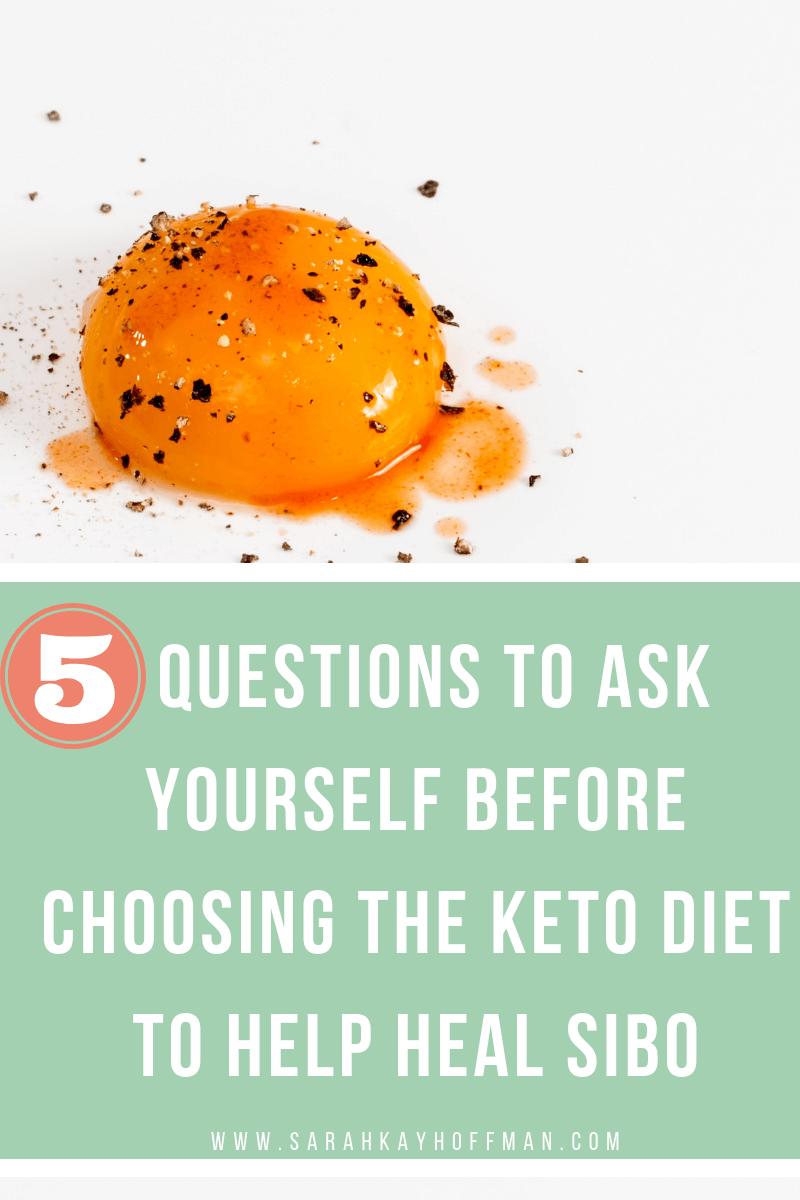 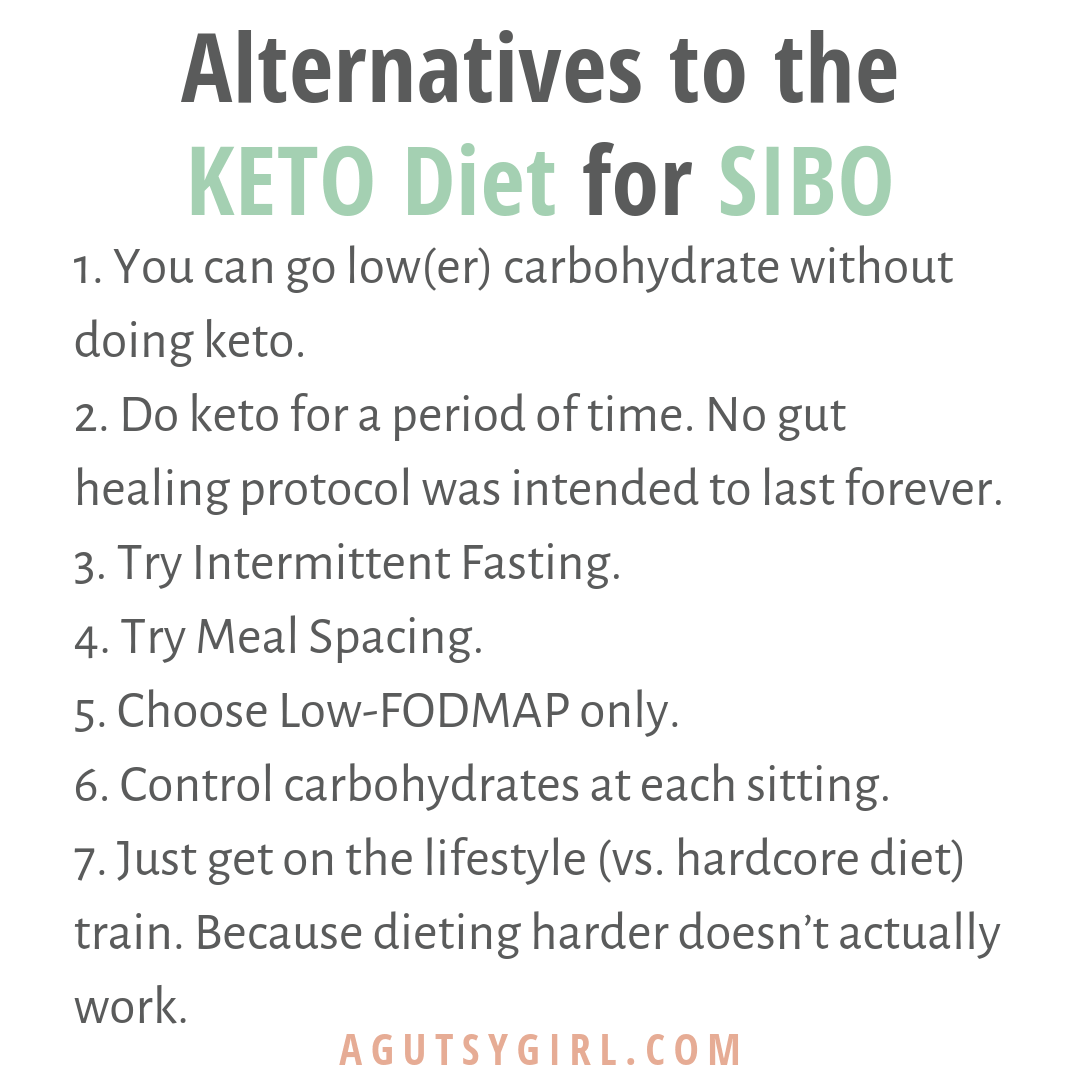 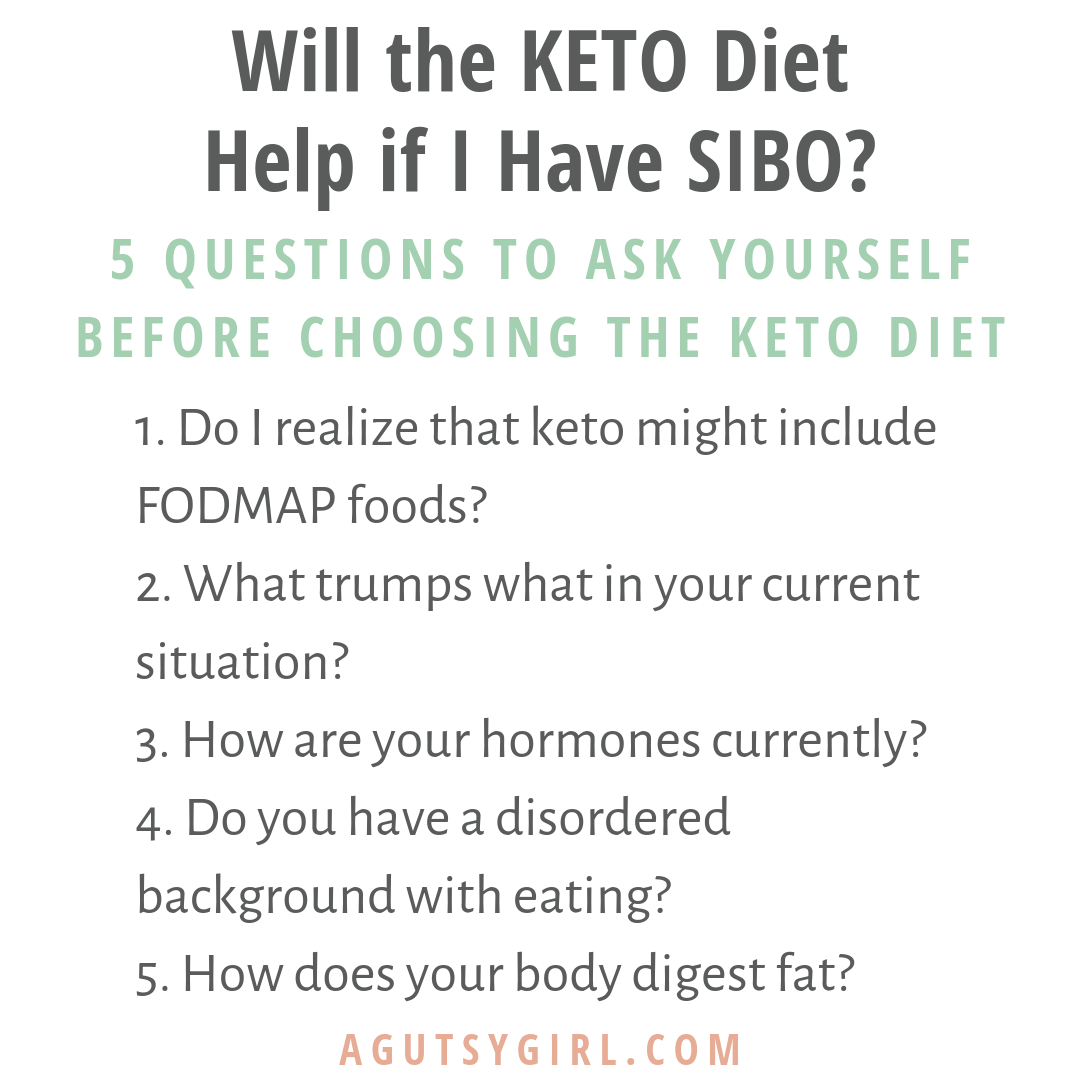