This Gluten Free – Baked Pumpkin Donuts Recipe is going to be a hit for everyone at your house.

Some of the links in this post are affiliate links. This means if you click on the link and purchase the item, I may receive a small commission at no extra cost to you. All opinions remain my own.

I’m going to give you the best way to make healthy baked pumpkin donuts without actually using real pumpkin.

Stick with me here for a second.

Let me tell you how they came to be.

In 2014, I finally received some delicious recipes from my Grandmother Josephine’s homemade donuts collection. This was always one of my favorite recipes growing up and spending time at her house.

I can, quite literally, still smell those donuts each time I opened the cookie jar (which is where she kept them). Warm spices and brown sugar aroma filling the air. So. Darn. Good.

But grandma’s donuts were quite obviously not gluten-free donuts. While she used simple ingredients (which is also critical), they were not made for any sort of gut-healing protocol. IYKYK 🙂

So, I played around with the original recipe until I perfected it to be my own, Paleo-ish version.

I renamed them, Old-Fashioned Donuts, took the donut batter, and made them one year on Christmas morning. Confirmed…..still delicious as ever.

Well then one fall, I got an email from Nikki’s Coconut Butter saying they had released a seasonal flavor, “Pumpkin Spiced Donut.”

A few days later when they arrived and I taste-tested I knew they would make a sweet treat out of the gluten-free pumpkin donut recipe I created.

The next time I made them, I also added in a Pumpkin Spiced Donut frosting (which was also brought to life from an old recipe I created – cupcake frosting) to accompany, and the rest is history.

No reason to make anyone wait any longer for this recipe.

These will be perfect for Halloween, Thanksgiving, and Christmas.

And in case anyone cares….these donuts are not only gluten free, but also dairy free, Paleo-friendly, soy free, and corn free.

They use no refined sugars or artificial ingredients.

Ingredients to make your own donuts:

You do not have to make the frosting in order to make these. All I’m saying is that a frosting addition makes for the perfect fall treat! 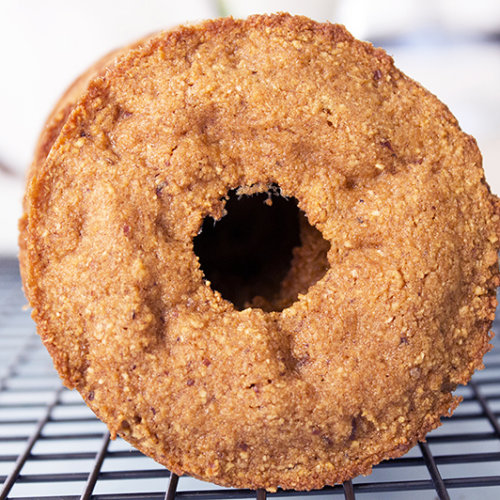 If simple concoctions like these gluten-free pumpkin donuts are interesting to you, then you’ll love my book, A Gutsy Girl’s Bible: a 21-day approach to healing the gut. In it, you’ll find 100+ Creations. Grab your copy on Amazon HERE.

Or, have this book at your fingertips instantly by downloading the PDF now.

As the recipe is written, all of these flavors would pair with the pumpkin pie spice, except maybe not the Dark Chocolate Fudge.

If you want to use the Dark Chocolate Fudge flavor, might I suggest swapping the pumpkin pie spice with a cinnamon mixture or cardamom?

I think your whole family is going to love this one. I know ours does!