Think severe eczema in children has nothing to do with the gut? Um, no, think again. Gut-skin connection.

Today, let me introduce you to the “official” second Gutsy child. Her name is Samarah.

I always thought Samarah would be the only child to escape being Gutsy. If you have followed this blog since we got her, you will remember that she was Gutsy (GI-wise) from the very first night, but outgrew that. She would ultimately go on Nutramigen (a hypoallergenic formula) and baby acid-reflux medication to get it all under control. And we didn’t really have a choice because she was a child of the foster care system at that point. If a doctor said it or prescribed it, we didn’t get to refute very often. 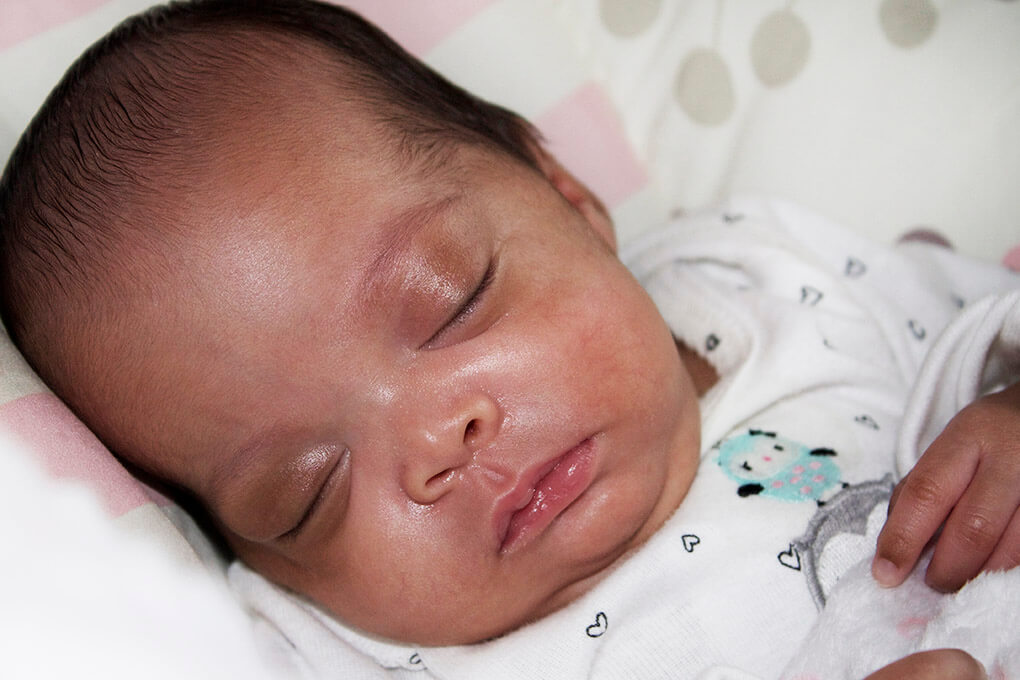 Looking back, I may have still done it; also might not have. That’s neither here nor there because we have arrived to present day.

Seemingly, she has no real gut issues. And yet, she is a Gutsy Child, and her journey has begun.

It’s probably already been a few months, but Ryan and I started noticing minor rashes here and there. 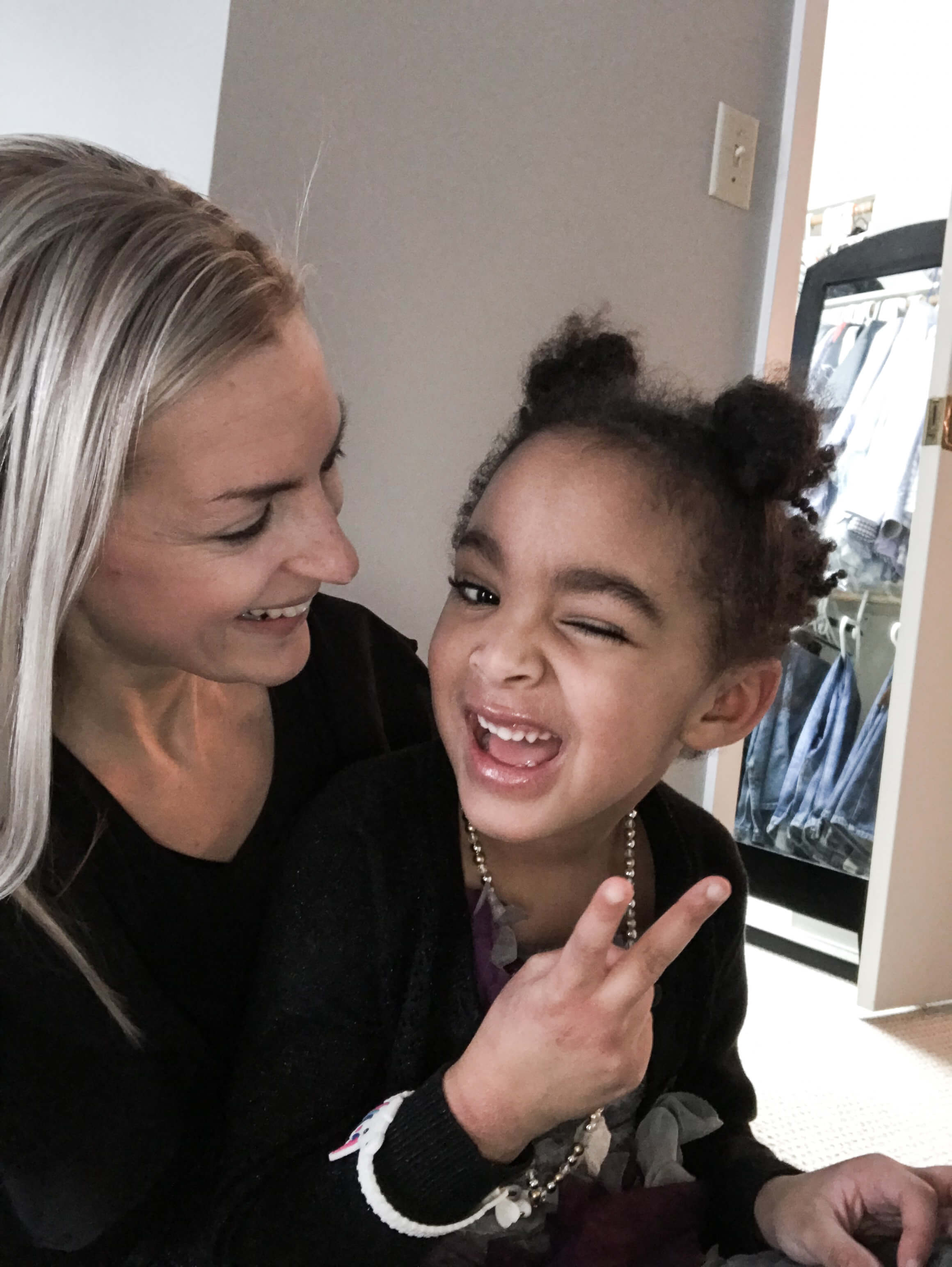 Around my birthday it got really bad. Raised rash covering her face and throughout her entire body (mostly affecting stomach, back, hands, and legs – you can see it a little on her hands in the image above). At first, we thought it could be Strep, since that happened to her once in the past. And then on my birthday, February 10th, she was nearly covered in the rash and randomly told Ryan her heart was beating fast.

We panicked – I mean, I don’t mess around with heart stuff – and brought her in immediately to the ER (the only thing open on a Sunday morning). Heart was fine; Strep culture negative.

The PA we worked with that day had no clue what it could be. He suggested Kiratosis Pilaris, gave us creams and a steroid (it was that bad), and said to follow up with a skin doctor (because he literally consulted with Dr. Google on her condition). In other words, you are not the only one to consult with that brainy online Dr. Google, my friends. 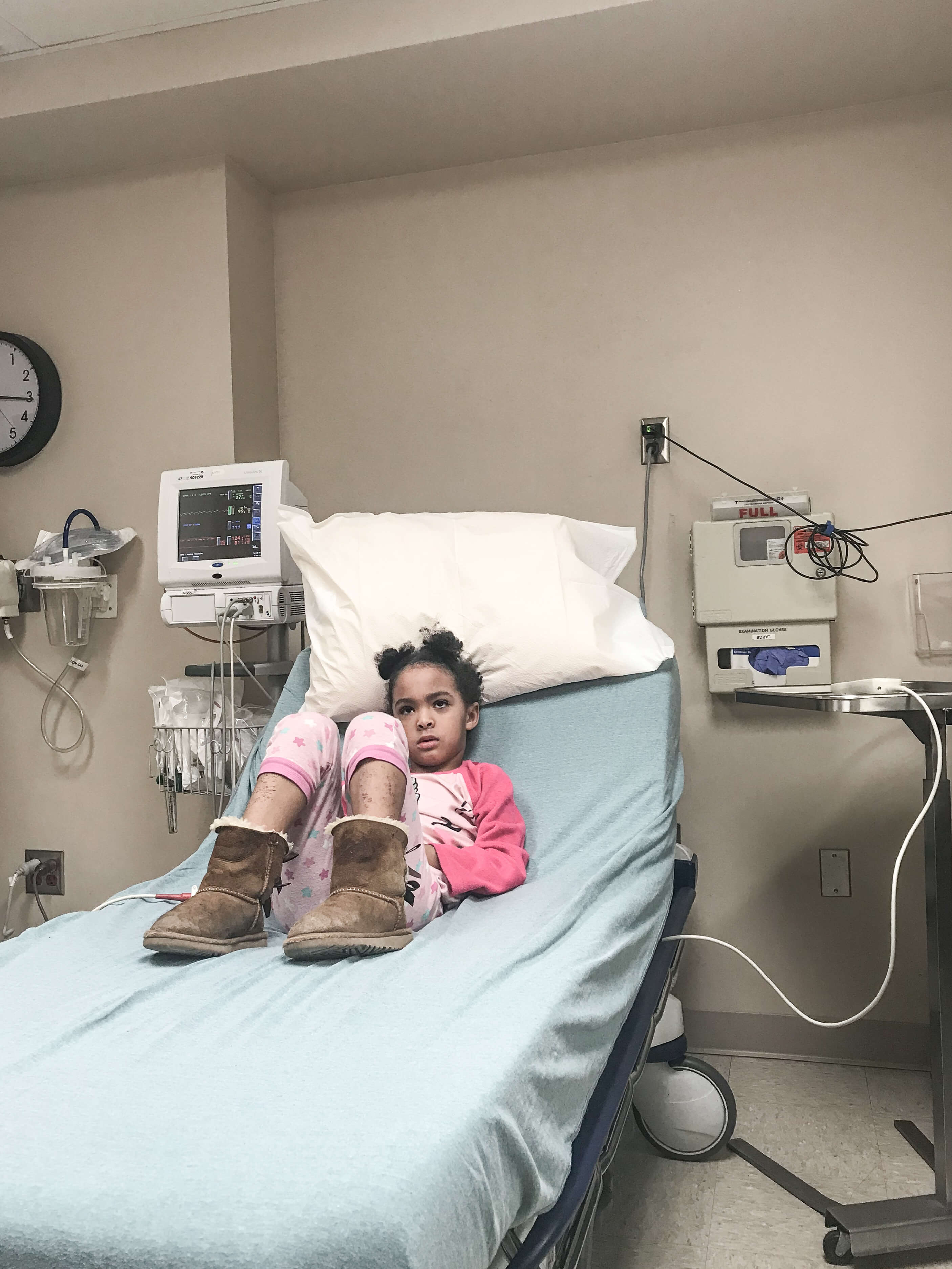 At Isaiah’s appointment with my doctor (when the Intestinal Parasites diagnosis was given), I made an appointment with another doctor there who my doctor thought would be great for Samarah. Though I knew it would be the start of yet another journey like this in our house, creams and steroids are not a long-term solution for a 5 1/2 year old. And like with Isaiah, I didn’t want to start excluding all the foods before getting a better idea about what’s going on.

Samarah and I saw the doctor first thing this past Monday morning. She still has light scabbing on her legs, and faint scars on her hands so the doctor could tell the severity of it. However, we had already taken out gluten and dairy (because my doctor recommended it for now to get it under control) so her skin had vastly improved.

We walked through her entire history from before birth, during birth, early days and months up to the present day. In the end, she concluded that she definitely has severe eczema, but our goal now is to figure out why and what else is going on. Such a novel concept, right? (insert sarcasm)

The doctor suggested a blood test (for food allergies) and then a stool sample. She said, “I’ll leave the stool sample up to you, though.” I immediately said, “Yes, stool for sure. Even though she might not be showing a ton of GI issues, it’s clear that her gut can’t be 100% if she had a massive Eczema breakout like that.” The doctor responded, “Exactly what I’m thinking, but just wanted to give you that option.”

Since she was on the steroid cream, we couldn’t do the testing that day (because the steroid creams weakens the immune system – probably why she then spiked nearly 104 degree temp not too long after). I am bringing her in for the blood test and to get the GI kit next Thursday. We will go from there.

Don’t worry, I’m always killing it in the mom department, so after the appointment, she and I went on a coffee and breakfast date at Caribou. Facial skin clear as ever. 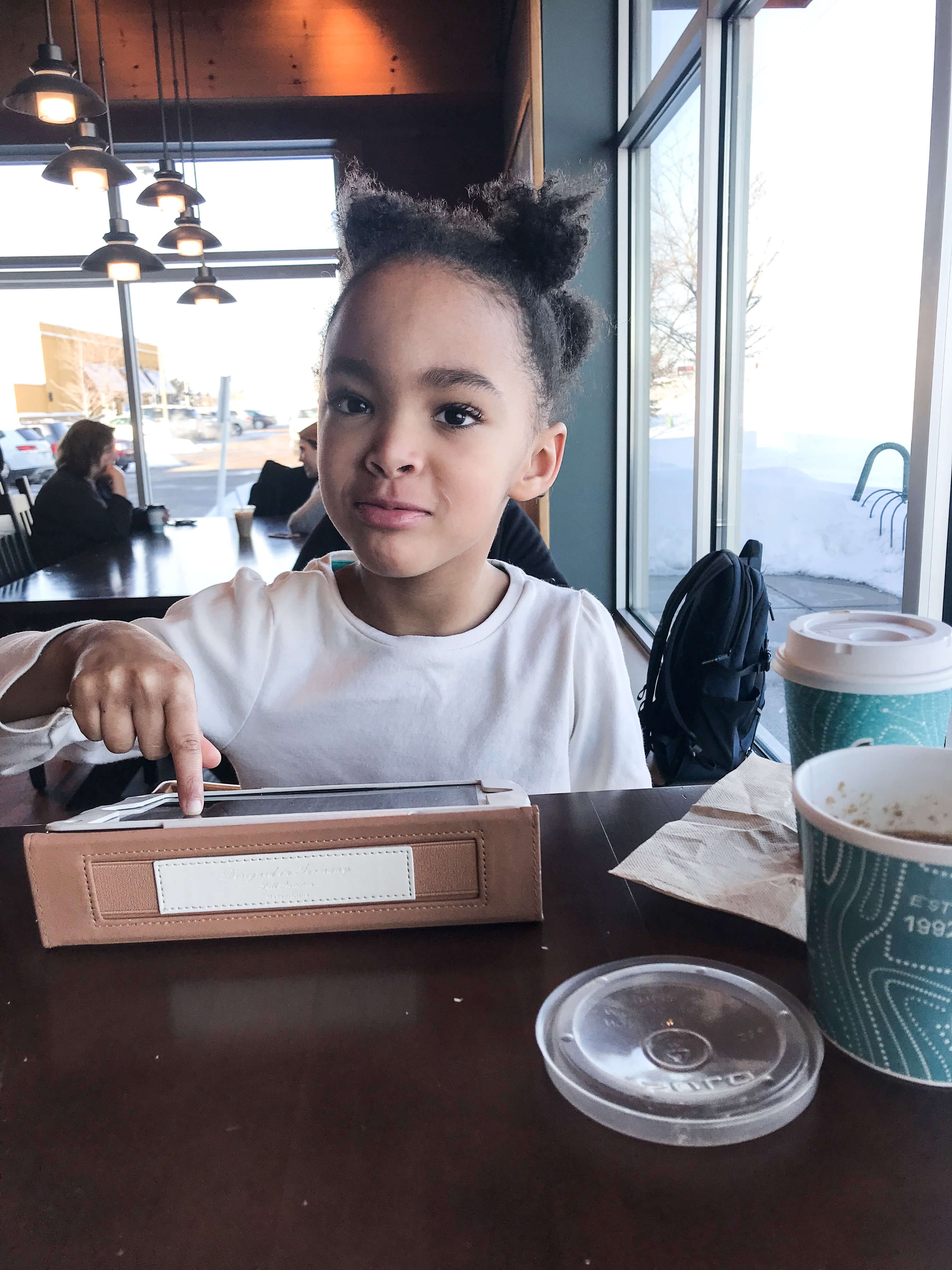 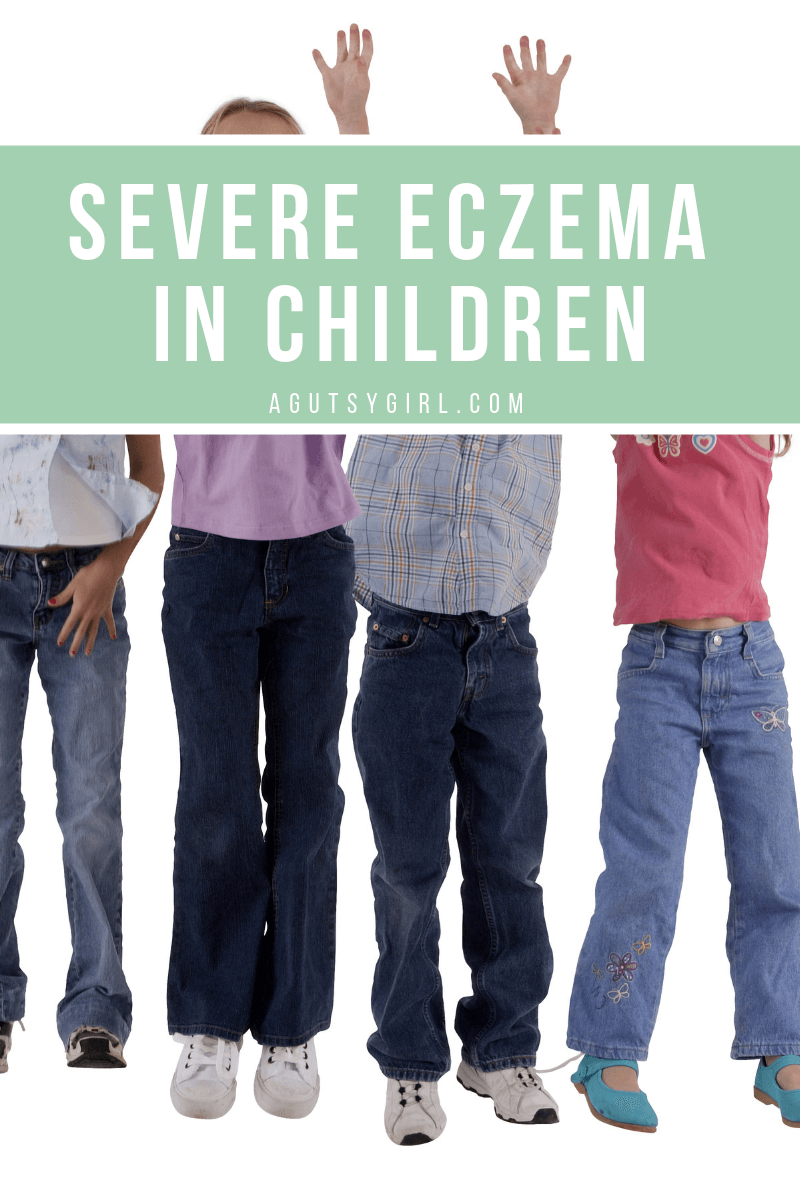 Your gut’s job is to keep toxins, infections, and inflammation at bay. Your skin is the major detoxifier that helps eliminate the substances and waste created during this standoff. This connection and relationship is called the skin-gut axis.6 When the gut is not functionally optimally, it can result in issues throughout the body, even to the point of autoimmune disease. The skin is often the first place to show the effects of an unhealthy gut.

She goes on to say that almost every patient she has ever seen with a chronic skin condition has an underlying Candida overgrowth.

It is estimated that about 1 out of every 10 kids will develop eczema. Kids with eczema usually develop itchy, dry, red skin and small bumps on their cheeks, forehead, or scalp. The rash may spread to the arms and legs and the trunk, and red, crusted, or open lesions may appear on any area affected.

There is no test to diagnose eczema definitively, which is why to just say, “You have eczema, do this and go home,” is not super helpful. Skin issues have underlying gut issues. You can test for those.

Regardless, while waiting to understand more about any underlying conditions, there are (natural) things you can do to minimize the eczema flare up. I love this list from Wellness Mama and am sharing them vs. the traditional because I believe in them more: 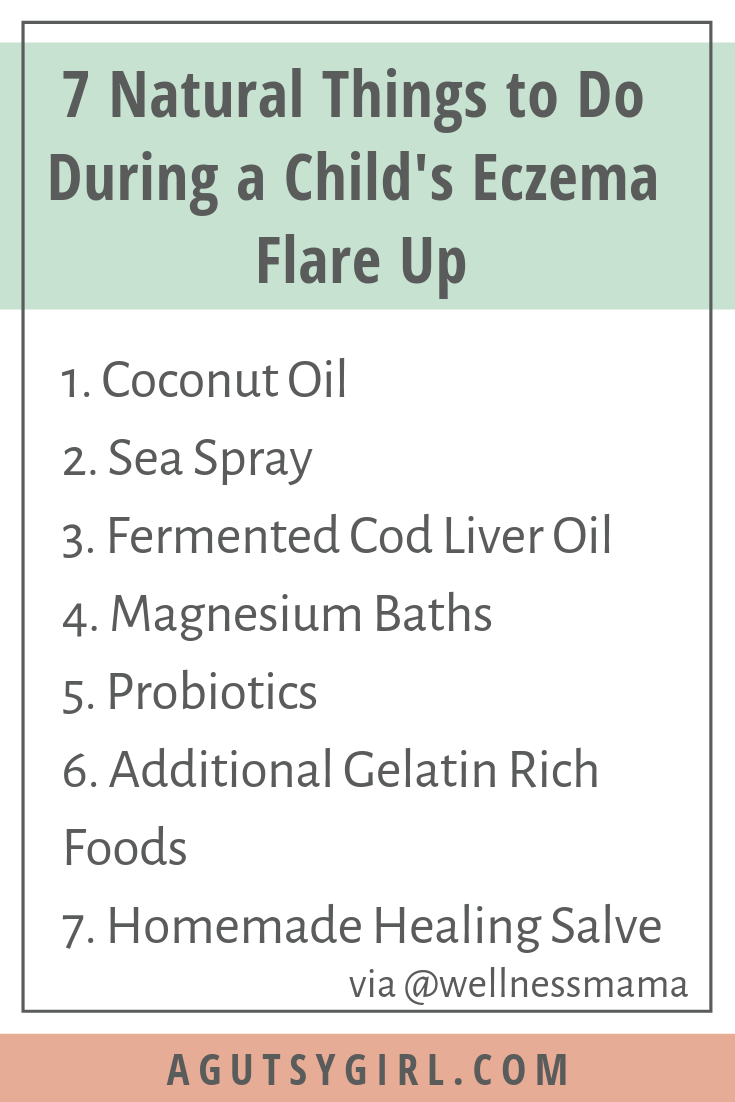 But yes, of course, there are many traditional things to do as well. HERE is a list.

Looking forward to sharing this new journey with you as well.

p.s. Do you personally have dry skin, eczema, or general acne? Consider healing your gut as the best first place to start. And make sure you’re using the right skincare line.