Ready Set Go! Here we are, kicking off Gutsy Children with my initial thoughts and predictions about what has been plaguing Isaiah vs. the reality for where we are, what testing we are doing, and more.

But first, what am I using to replace the MiraLax solution? It’s called Ready! Set! Go! This is what my doctor (Isaiah’s new doctor) gave for getting things flushed through him.

Ready! Set! Go! is made by Ortho Molecular, and contains a proprietary blend of natural fruits and plant extracts to support normal elimination for children with occasional constipation. It contains ingredients like plum, fig, fennel, psyllium, and ginger root extract. The “other” ingredients are: Sorbitol Syrup, Purified Water, Potassium Sorbate, and Citric Acid. I’m not overly thrilled about the Potassium Sorbate, but for a product intended to act quickly and used minimally, I’m okay with it. We can’t win all the battles.

Full disclosure, though. I have not yet given the Ready! Set! Go! to Isaiah because I don’t want it to skew the tests he needs to have done. I have been asked by several people, “So what do you think is wrong with Isaiah?”

Since the beginning, I’ve always thought he has a general “Leaky Gut” or possibly even SIBO in particular. If you think SIBO is impossible for a child to have, think again.

According to the National Institute of Health, one hundred children (59 girls and 41 boys) aged from 4 to 17 years (mean age: 10.47 ±3.73 years), hospitalized due to abdominal pain, were enrolled in the study. Hydrogen breath test (HBT) with lactulose was established among all patients. Symptoms of SIBO are directly associated with bacterial metabolism, intestinal mucosa damage that leads to impaired absorption of fat, proteins, carbohydrates, and fat-soluble vitamins.

I know all SIBO signs and symptoms. But if we want to get specific for research done on children,

Isaiah has most of those and then some. What he does not have are loss of appetite and failure to thrive or slow growth and/or weight loss (which many children and even adults) oftentimes have. In fact, he is the opposite; ravenous and keeps his weight like a little bowling ball. I haven’t let that deter me from my initial thinking because I am living proof that SIBO doesn’t always come with a loss of appetite or weight. Remember?

But even if it’s not SIBO, it’s some general form of Leaky Gut. He is clearly not digesting and absorbing food the way he should be. He is, at this point, reacting to almost everything.

I would never match up my gut instincts with what the GI doctor’s instincts were. Why? Because she had none. Just, “He’s severely blocked up. We need him to get MiraLax to make it all go through and then retrain his brain to work with his gut.”

However, I will take to heart everything the new doctor said and thought.

Given Isaiah’s history, signs and symptoms, the doctor thinks it’s just a lack of appropriate enzymes. Without appropriate ways for breaking down food, food is not digested appropriately, thus causing all sorts of problems – like those Isaiah is experiencing. Leaky Gut would be part of this. He doesn’t think it’s SIBO specific so we aren’t starting there for testing, but time will tell. The only other major possibility he brought up is something very severe – something I had not even considered for one second – but because it’s highly unlikely (especially considering that there was no linked gene for it on his 23andMe test), I am choosing not to mention it until there is a definitive ‘yes’ or ‘no’ on it.

The doctor has chosen to start with just one major test to get started on our path for figuring out what is wrong. It is the DiagnosTechs GI Panel. DiagnosTechs Gastrointestinal Health Panels address:

He is doing both the stool and saliva-based testing.

We are hoping to start the testing on Monday (tomorrow). For three days prior, two of the foods you are not supposed to have are broccoli and cauliflower. He had both on Thursday night. And yes he loves them both; no I do not force them on my children.

I feel like we are finally getting somewhere. I don’t think it’s going to be a quick (or cheap!) process, but I would rather take this route and do it right the first time than spin wheels for years like I did on my own journey.

3 Reasons for Avoiding Self Supplementation and Guestimation 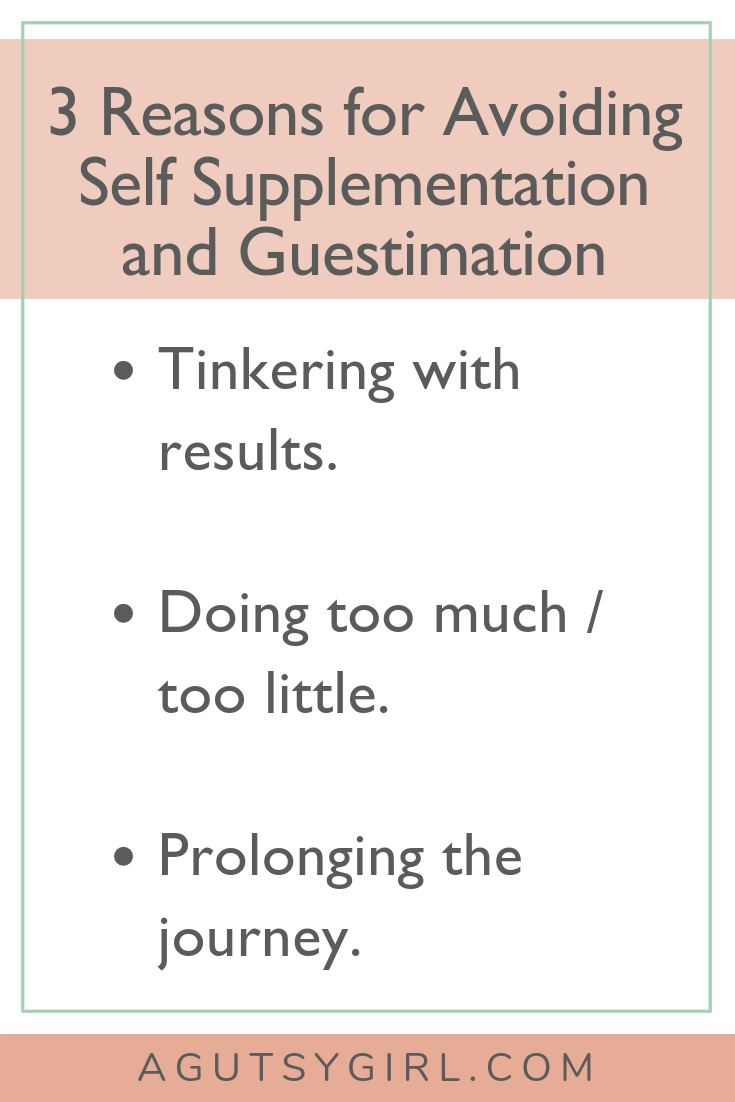 People keep giving me all sorts of advice; give him oils, herbs, probiotics, prebiotic, this food, not that food, etc, etc. While I appreciate the thoughts and gesture, I know all of that. I am the originally A Gutsy Girl. But like I have been stating over-and-over (and will continue to preach), I do not believe in doing all the things (especially with/for children on a gut-healing path) until a real diagnosis has been made.

It is critical for you and your children that you don’t either. And these are my top 3 reasons why:

I hope that this was a valuable post to get you started, too, if you have Gutsy Children or A Gutsy Child.

I’m not only here to help, but also to listen.

You got this, Mama.