I had this idea for a series on micronutrients and macronutrients and SIBO a long time ago. I never pursued it, though, because I wasn’t sure how important or interesting it would be to people. And then my blood tests came back recently, and for the first time ever, I was deficient (or borderline deficient) in several things. I mentioned this in Carbs and SIBO, but here they are again…

Because I know this is going on with thousands who live with a stubborn case of SIBO, I knew this series would be both important and interesting – for you and for me. What is a Micronutrient?

Harvard Health stated that while, “while you only need a small number of micronutrients—vitamins and minerals—failing to get even those small quantities virtually guarantees disease.” They shared the story of British sailors from centuries ago to prove the point.

British sailors learned centuries ago that living for months without fresh fruits or vegetables—the main sources of vitamin C—caused the bleeding gums and listlessness of scurvy, a disease that often proved fatal. Even today in many low-income countries, people frequently suffer from a variety of nutrient-deficiency diseases.

We are not British sailors from centuries ago, yet these problems continue to be a widespread problem. And yes, even in America. 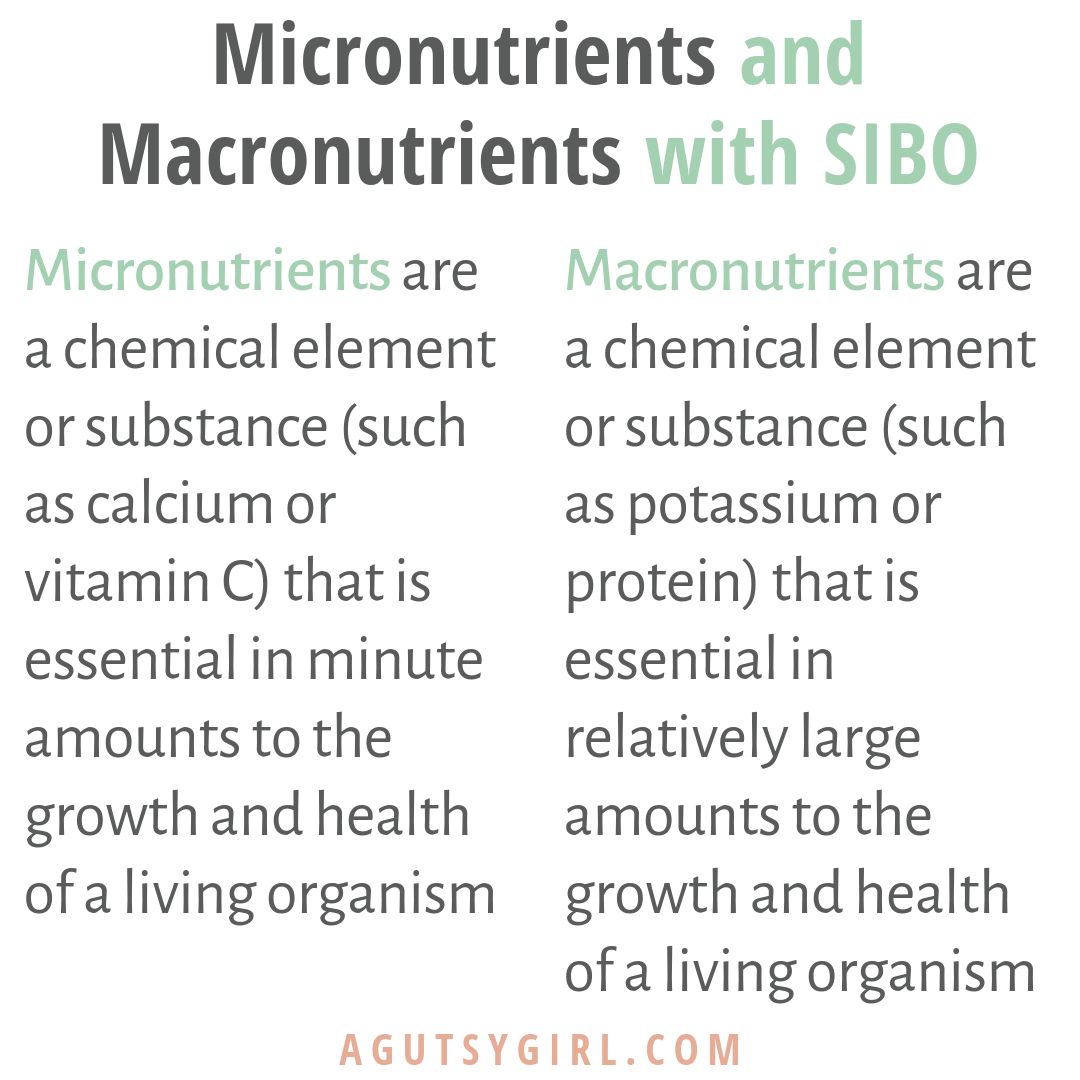 What is a Macronutrient?

We know macronutrients as “the big three:” protein, fats, and carbohydrates, but they actually extend far beyond that (hence the example of potassium above).

Macronutrients, presented as the big three (protein, fat, and carbs), are eaten in large amounts and include the primary building blocks of your diet which provide your body with energy.

According to an article published in 2012 via Today’s Dietitian,

Due to the bacterial overgrowth, patients often experience various nutritional deficiencies. Malabsorption induced by rapid intestinal transit time can lead to the loss of both macronutrients and micronutrients, such as omega-3 fatty acids and liposoluble nutrients, such as vitamins A, D, E, and K.5.

Once your body begins to heal from SIBO, it also starts absorbing food properly once again.

And that is step one, even before we get so concerned with everything we are or are not absorbing.

I no longer believe this is a game of chicken and egg. I believe that SIBO came first, then our bodies started becoming deficient and not able to process things, and then it became the chicken and egg scenario with a vicious cycle ensuing.

Focusing on healing SIBO is king, but learning about and understanding micronutrients and macronutrients with SIBO is queen because once you’re on the path to healing SIBO, you must work on increasing any outstanding deficiencies while (re)training your body to enjoy all macronutrients (not just protein and/or fat). (By the way, I know not everyone is going to agree with me that we should be including carbohydrates, but I believe in real life and not a stringent lifetime diet.)

Each post throughout the series will focus on just one. This is so that you can easily find them in the archives when you need it.

I am really excited to dig into various micronutrients and macronutrients on a deeper level. My plan is to start with the ones I have listed above (plus B12 – a critical and common micronutrient deficiency with SIBO), but feel free to CONTACT ME if there is one you are very deficient in and would love for me to feature.

By the way, have SIBO and don’t want to miss out on Micro- and Macro- nutrients? You don’t have to. Get Reasonable SIBO HERE! 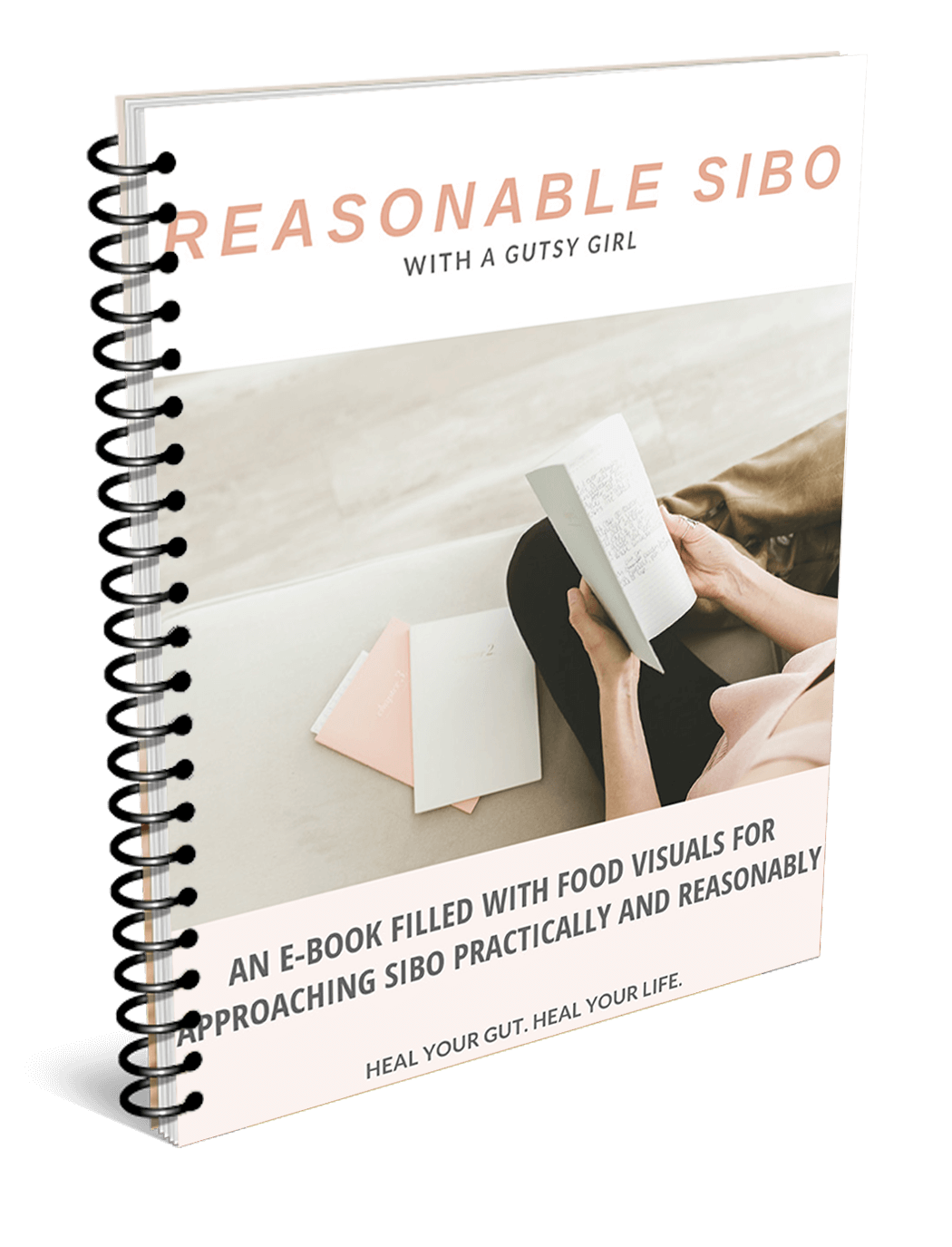