Juicy. Ready for this DIY elemental diet for SIBO post?

I’m constantly being asked about my thoughts on the elemental diet for SIBO.

So I thought I’d take a fun and interesting spin on the topic today.

This is a guest post from Trinity, who works with me daily. She, too, is Gutsy and recently completed a DIY elemental diet for SIBO. 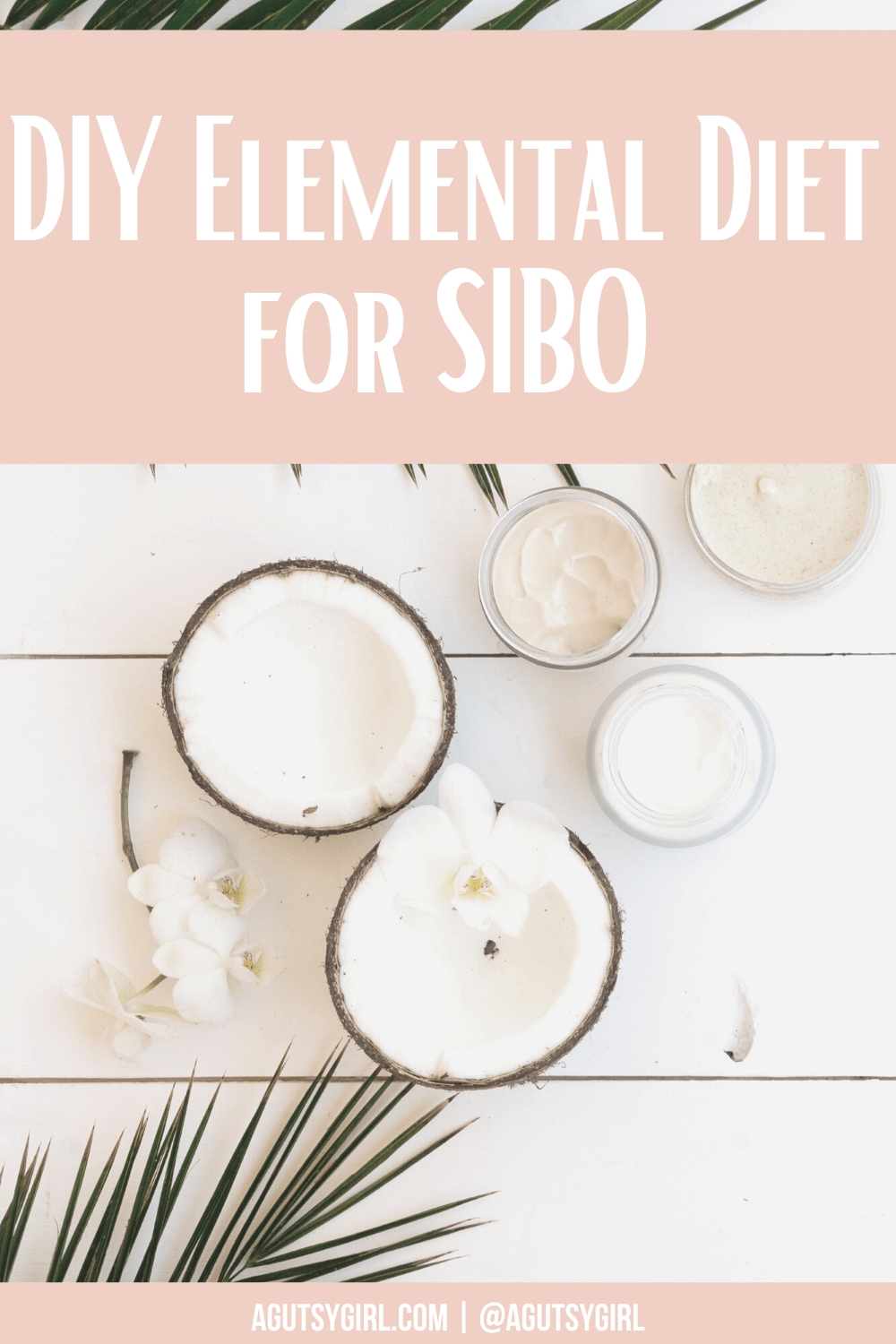 First things first… if you’re recovering from an eating disorder or struggle with disordered eating, the elemental diet is not for you. There are many other methods to try for healing SIBO so go read about those.

Otherwise… here’s how I healed my SIBO with a DIY elemental diet.

My journey with SIBO started in June 2019. After being diagnosed, I was given a protocol that involved Biocidin, a herbal antibiotic, three times a day, more than a handful of supplements a day, and started the low FODMAP diet.

About a month after being diagnosed, I was leaving to study abroad in Australia. Not wanting to deal with SIBO while traveling, I was meticulous with the protocol and sure enough, after a little over a month of hard work I was feeling at least 75% better.

AGG note: You can read all about Trinity’s story HERE.

My Second Experience with SIBO

After 7 months of being SIBO-free, I noticed my symptoms coming back a few months into being back at college in a stressful environment.

I visited my integrative medicine doctor and we decided to repeat the same protocol that healed me the first time. I tried the protocol again, but after a month my symptoms were only 25% better.

Why the Elemental Diet?

Not wanting to go the antibiotic route, I explored other ways to heal SIBO.

Because of this, the elemental diet would not have been an option I considered, but with COVID keeping me stuck at home I decided to give it a shot.

My relationship with food was in a solid place and I felt confident I was doing the diet for healing purposes rather than with the intention to lose weight.

I spoke with my integrative medicine doctor about the diet (something you should 100% do before you start!), did weeks of research that included reading scientific research papers, and joined two different Facebook support groups for SIBO and the elemental diet. 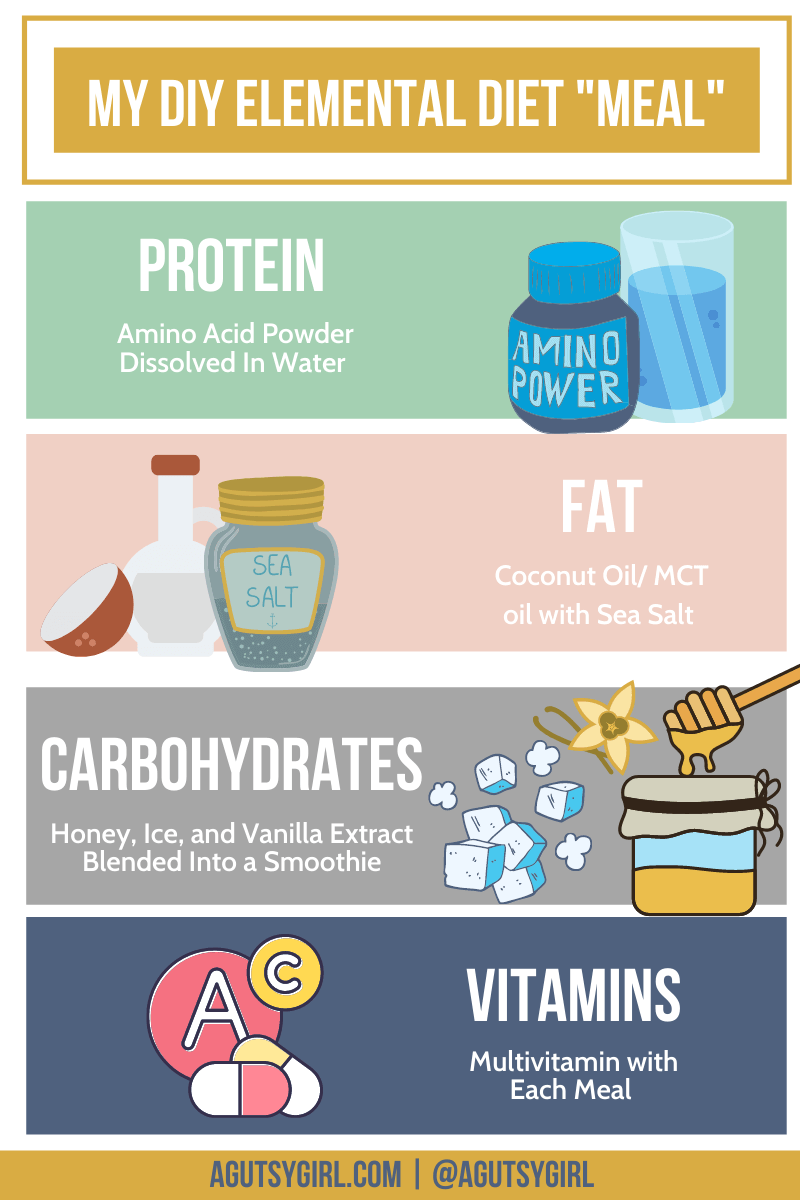 What is the Elemental Diet and how does it kill SIBO?

The elemental diet contains every nutrient needed for survival, but in their most basic, pre-digested forms.

It contains fats, carbohydrates, and amino acids (the building blocks of protein), in addition to multiple vitamins you would usually receive through food. Consuming these nutrients in their pre-digested form starves the overgrowth of bacteria and causes it to die.

The estimated success rate for two weeks is about 80% compared to a success rate of only 49.5% with antibiotics. The large difference in these two statistics was a big factor in convincing myself the elemental diet was worth a try.

Getting Started on the Elemental Diet 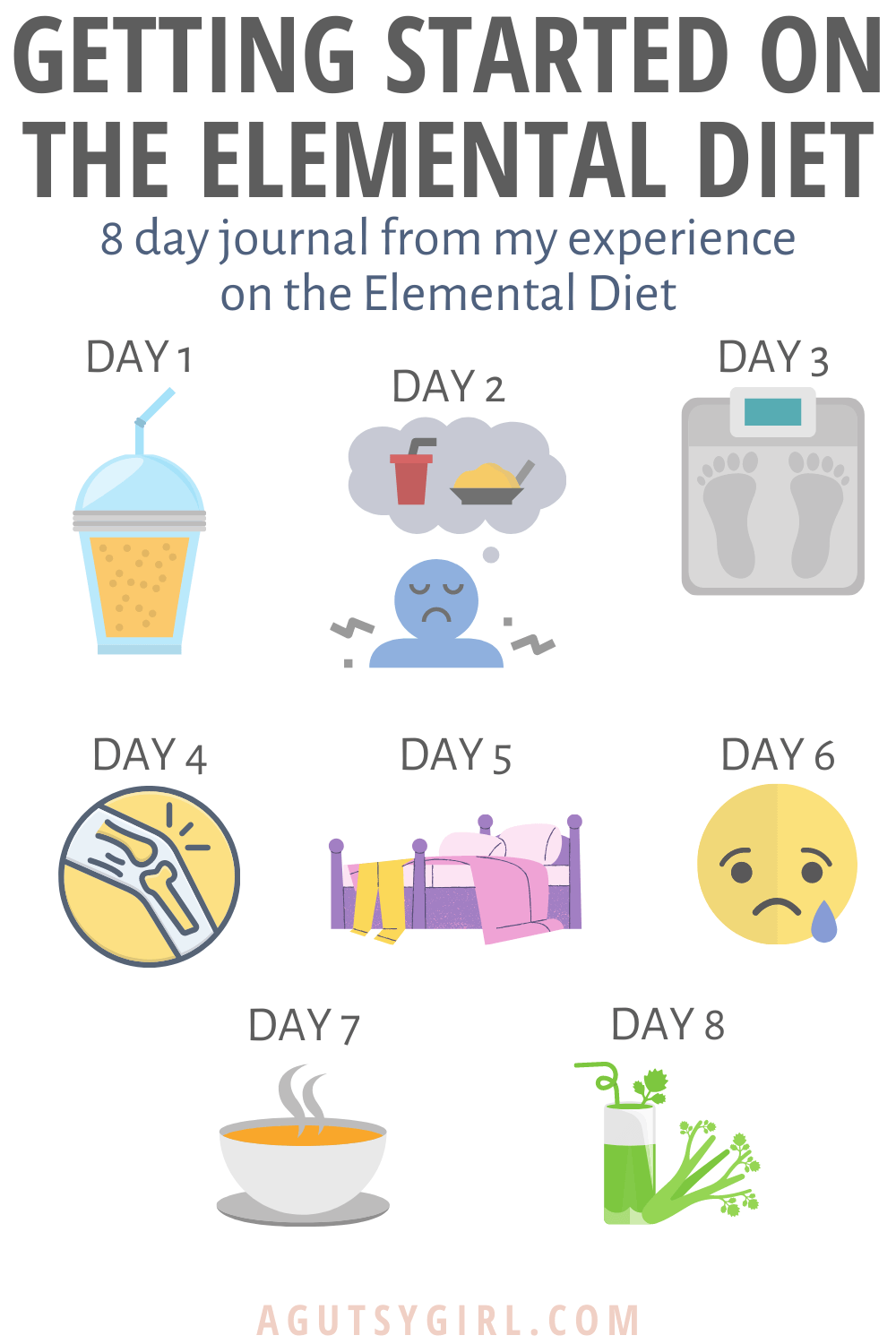 There are lots of different formulas for the elemental diet. Instead of purchasing a pre-made formula with lots of ingredients, I chose to make my own with simple ingredients using Dr. Allison Siebecker’s homemade recipe (cited in the source below).

From her recipe, I chose the low carb/high fat option because I knew my body was used to less sugar in my diet.

I ordered the amino acids, and multivitamin online and bought honey, coconut oil, and sea salt at a local grocery store. The amino acids were the most expensive item, but it was still cheaper to purchase them on their own than to buy enough formula for the entire diet.

To prepare, I blocked off a week where I had few obligations that would require much movement or brain power and of course picked out a new Netflix series to start. Although, I’d highly recommend not watching a show with much food.

I knew the longer I could stick with the diet the more bacteria would die. After researching different amounts of die-off over different durations of the diet ranging from one week up to one month, I decided to set a loose end date of two weeks with the caveat that I would listen to my body throughout and stop if I felt I needed to.

So, I kept a journal throughout the diet and recorded how I felt along with my weight each day. I also printed a calendar so I could proudly check off every day I made it through. I started out feeling very determined, but also slightly anxious that my willpower wouldn’t hold through the first three days which I had read were the hardest.

AGG note: My gut-healing journal is perfect for this.

I read that blending the ingredients of what I needed for each meal together with ice would make it feel more like eating a meal.

Each “meal” consists of amino acid powder, a fat source, and carbohydrate (dextrose or honey). I tried my first meal blended together.

Tried to make a shake with amino acids + vanilla + coconut oil. Was HORRIBLE. Could not finish it.

At this point I thought I’d rather fast for a week than try to drink this mixture. I was feeling slightly discouraged after realizing how awful the amino acids tasted, but I kept busy throughout the day and even went on a walk while I still had my energy.

I tried to make my second “meal” of the day and again could barely get the amino acids down. At this point I decided I would just mix the amino acid powder into water and chug instead of trying to blend into a smoothie. Then, I ate coconut oil with salt on it to have my fat source and salt for the meal. Surprisingly, this isn’t awful! Finally, I made “dessert” which was ice, honey, some MCT oil, and a few drops of vanilla extract for flavor.

Later that evening my family made such an amazing smelling dinner which definitely did not make my first day easier, but I went to bed proud of myself for making it through the day!

I woke up with sharp hunger pains.

I chugged my amino acids, ate the coconut oil, and had another ice smoothie. And I stayed busy most of the day; fortunately had a few calls in the afternoon that helped pass the time.

Most people said they fell asleep much earlier than usual during the elemental diet, but unfortunately I had the opposite problem for the first three days.

This was most likely a mixture of losing water weight and inflammation (hopefully!).

On this day I barely finished the amount of amino acids I needed. They started making me feel nauseous and I decided to skip them for the rest of the day.

This morning I woke up and wrote,

I don’t think I can get out of bed or stand.

The entire day I felt very dehydrated and weak.

I made sure to get down all of the amino acids I needed for the day and increased the amount of water I was drinking. On this day, I also started experiencing some muscle and joint pain.

I wrote absolutely nothing for day 5 and spent most of the day in bed.

I remember trying to go on a walk to move around, but after walking for five minutes, I decided to turn around because I felt too dizzy and my muscles hurt. It felt awful but I was somewhat encouraged knowing that most people’s die off symptoms were similar to the flu-like lethargy and dizziness I was going through.

On day 6 I wrote that I couldn’t stop crying!

In addition to feeling the same as the day before, I was extremely emotional.

This was something I read often happened to people during the diet. I needed someone to help me get up from the sofa and was exhausted just walking around my house.

At this point I decided I would only do a week of the ED. Part of me wanted to continue to ensure all that I’d gone through would pay off by eliminating my SIBO, but based on how my body felt, I knew it was time to slowly start eating again.

I woke up feeling horrible, but less horrible mentally because I knew today was my last day.

Around noon I had my first non-elemental substance.

I started with liquids to ease my digestive system back into action. And I continued with the elemental diet, but had a glass of celery juice first. It tasted incredible. I drank it slowly and thankfully felt fine by the end.

Since that went well, I made some homemade chicken broth and drank a glass for dinner. Introducing the broth also went well, and I went to bed feeling much better than I had the past three days.

I weighed myself one last time this morning and was down 11 pounds from where I started.

I started my day again with celery juice then had a small cup of papaya. Papaya naturally contains digestive enzymes that I hoped would help wake my digestive system up after not digesting anything solid for a week.

For lunch, I made soup with carrots, thyme, and ginger. I felt a little bloated after this meal, but nothing close to SIBO bloated.

I rested all afternoon and went on a short walk then had a light dinner of steamed veggies, and some fruit.

Was it all worth it?

YES! Although it was frustrating, and one of the most difficult mental challenges I’ve been through, if my SIBO were to return and I had enough time to dedicate to focus only on healing, I’d choose the elemental diet again.

A week after finishing the diet my skin looked amazing. It initially broke out more during the diet most likely as my body detoxed, but after I finished it was radiant.

For the two weeks after the diet, I mostly ate plant-based foods to help my body continue to detox, but with bone broth to support my gut lining.

I also eased back into working out and did yoga and light weight lifting for these two weeks to avoid high intensity workouts that could disturb the healing process. And I continued fasting for about 14 hours every day to give my digestive system enough time to reset each day; also made sure to stay hydrated.

I’m happy to report that my SIBO has stayed away since.

If you’re considering the elemental diet I’d first go make sure you’re truly motivated to do it to heal your SIBO and not just for weight loss reasons. (Spoiler alert: the weight comes back, it’s not a weight loss diet just an inflammation-loss diet!).

If you approach the diet from a healing mindset and use the down time to rest and allow your body to detoxify and heal the process feels less like restriction and more like renewal.

I want to add some more information to the DIY Elemental Diet for SIBO post.

When I was studying at Chris Kresser’s ADAPT Academy, I picked up some Elemental Diet information. And I wanted to pass some of the information along to you today.