Let’s chat about the endocannabinoid system and your gut today.

I recently went into our local CBD center because I wanted to learn more. Upon entering, I saw this graphic. 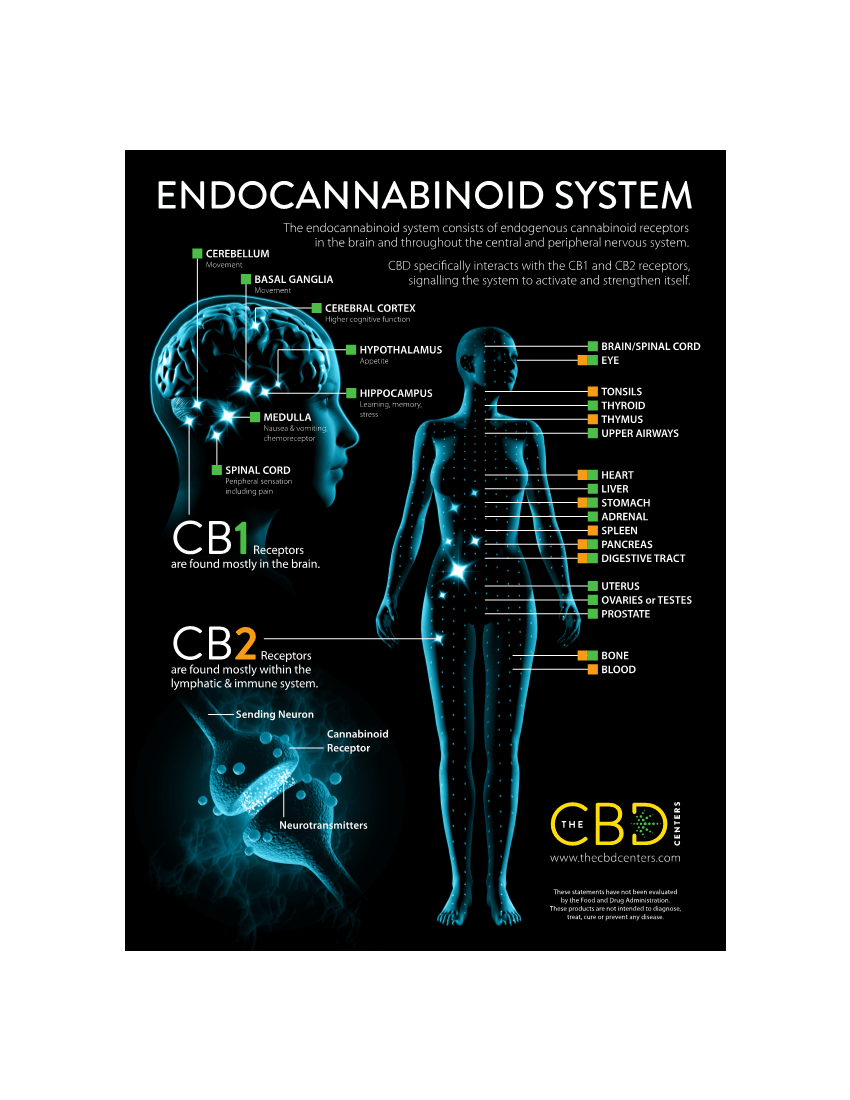 And I started asking questions because I was fascinated.

Now, before I continue on, I want to make a few things clear:

With that, let’s start with the basics.

What the Heck is an Endocannabinoid?

All mammals have endocannabinoids.

The difference is whether it is produced in the body (cannabinoids) or by the plant, phytocannabinoids (Cannabis). There are also synthetic ones (Synthetic Cannabinoids).

There are two endocannabinoids: anandamide and 2-arachidonoylglycerol, or 2-AG. Endocannabinoids are cannabinoids that are naturally produced in the body by the brain. This makes sense as endo means “internal, within.”

Endocannabinoids then bind to cannabinoid receptors on target cells throughout the body.

When cannabinoids bind to CB1 or CB2 receptors, they act to change the way the body functions.

CB1 receptors (mostly in the brain).

CB2 receptors (throughout the lymphatic and immune systems).

What is the Endocannabinoid System?

Discovered only about 30 years ago, the Endocannabinoid System is relatively “new.”

The endogenous cannabinoid system—named for the plant that led to its discovery—is one of the most important physiologic systems involved in establishing and maintaining human health. Endocannabinoids and their receptors are found throughout the body: in the brain, organs, connective tissues, glands, and immune cells.

With its complex actions in our immune system, nervous system, and virtually all of the body’s organs, the endocannabinoids are literally a bridge between body and mind. By understanding this system, we begin to see a mechanism that could connect brain activity and states of physical health and disease.

The ECS (Endocannabinoid System) role is to keep our other body systems in check, to maintain homeostasis (biological harmony in response to changes in the environment).

It can readily be viewed as the body’s internal adaptogenic system, constantly working to maintain a vast range of functions in equilibrium. Endocannabinoids broadly work as neuromodulators and, as such, they regulate a wide scope of physiological processes – from fertility to pain.

Okay, so now that the basics have been discussed you are thinking, “Great, but what does this have to do with my gut?”

Endocannabinoid System and Your Gut 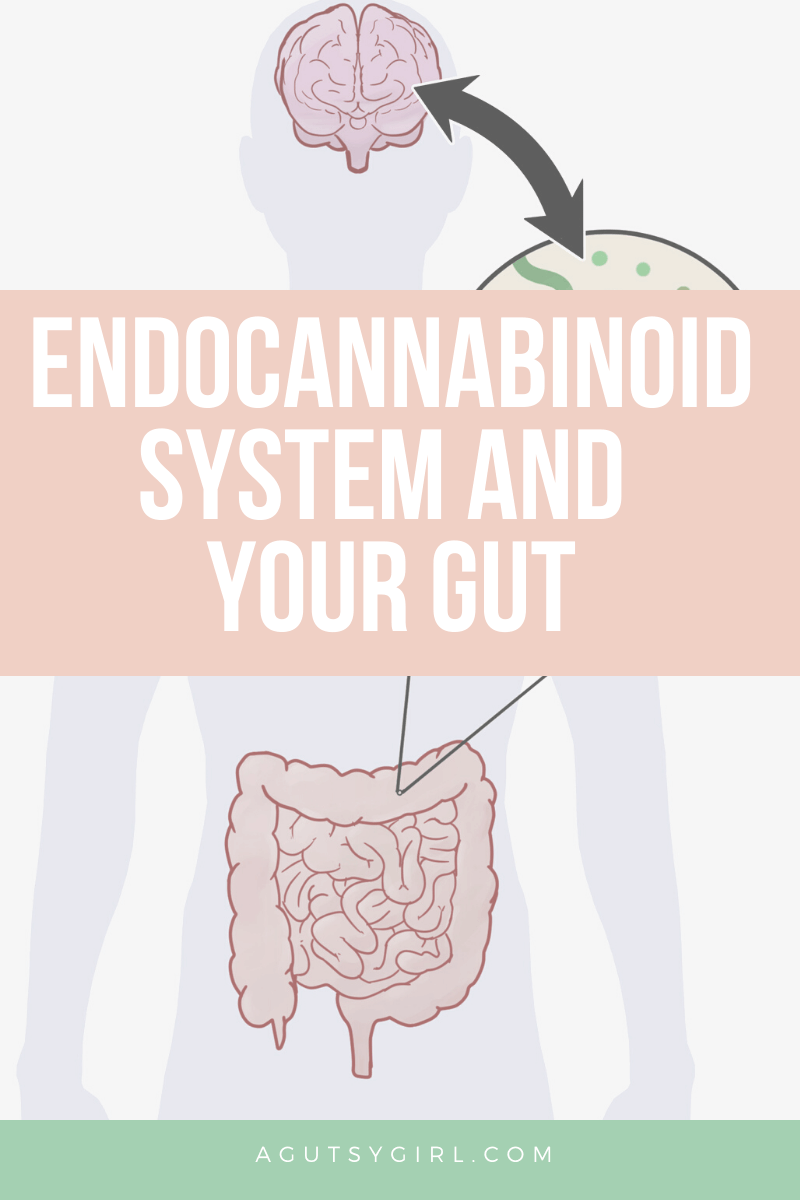 Let’s first refer back to the graphic. According to the graphic, the digestive tract contains both CB1 and CB2 receptors, as does the stomach.

And, according to Thorne,

It is believed that the ECS might be the “missing link” in explaining the gut-brain-immune connection that plays an important role in the functional health of the digestive system.

The ECS is a regulator of gut immunity, possibly by limiting the immune system from destroying healthy flora, and also through the modulation of cytokine signaling.

The ECS modulates the natural inflammatory response in the digestive system, which has important implications for a broad range of health concerns. Gastric and overall GI motility also seems to be partly regulated by the ECS.

More research on the endocannabinoid system and your gut:

Is this all as fascinating to you as it is to me? 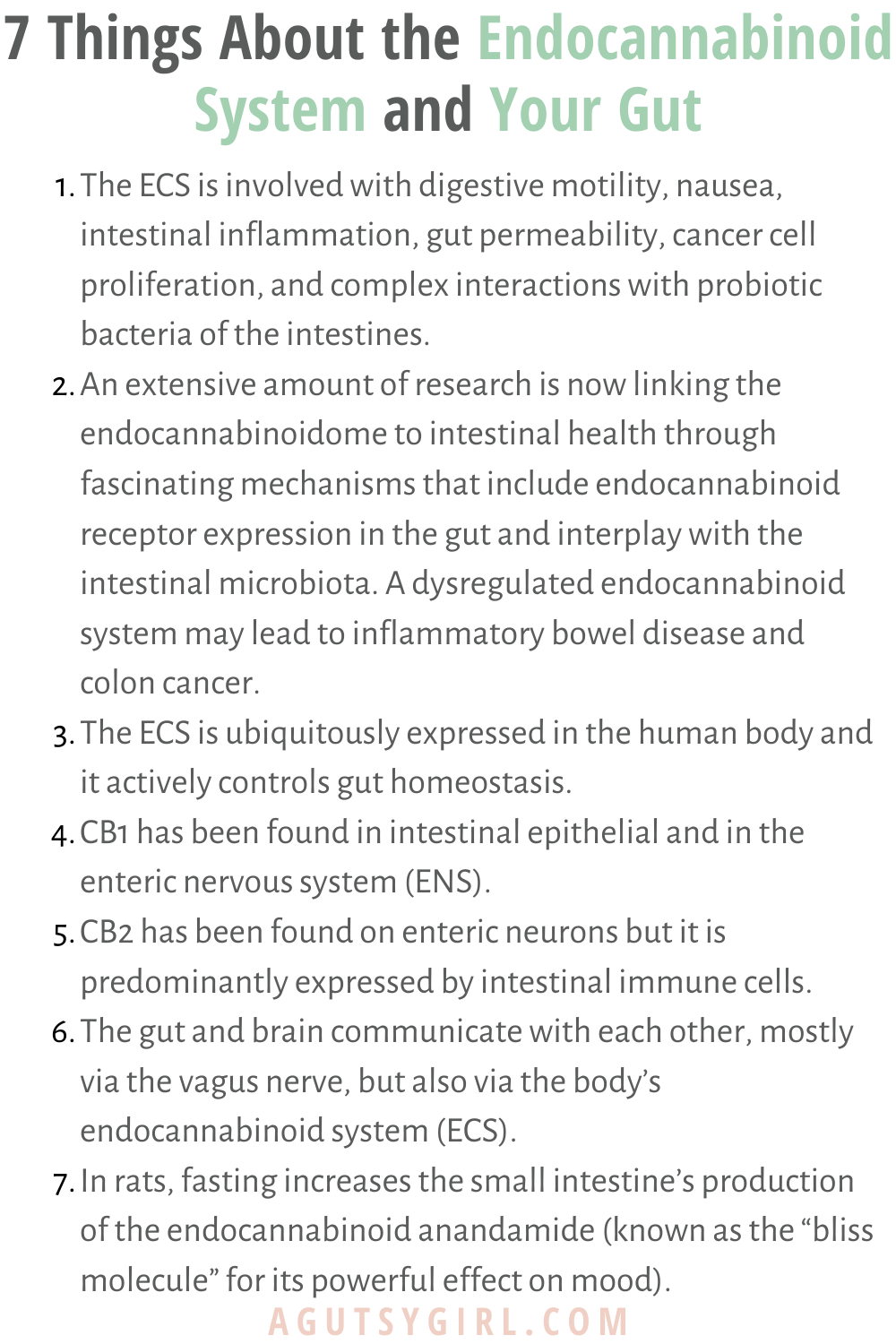 As part of my never-ending quest to have the strongest gut on the planet (only kind of kidding), I have added in this full spectrum CBD tincture. It’s the natural-flavored, 1500 mg option. But there are also these:

For a multitude of reasons, this one is top-notch. You don’t even have to live in the small town where I live to purchase it, either. All the links above will allow you to purchase and have it shipped directly to you.

With so many CBD oils on the market now, it’s so hard to know which one to choose and why.

Alright, this post is already super long, so I’ll be back soon to share more about all of that.