These Pumpkin Spiced Donuts are going to be a hit for everyone at your house.

Let me tell you how they came to be.

In 2014, I finally received the best version of my Grandmother Josephine’s donut recipe. So, I played around with the original recipe until I perfected it to be my own, Paleo-ish version. I renamed them, Old-Fashioned Donuts. Then, I then gave this recipe to Nutiva and added a little more holiday spirit to them. You will find it all via Old-Fashioned Donuts with Cranberry-Chia Glaze.

I made them last year on Christmas morning for Ryan, Samarah, and I. We confirmed that they were still as delicious as ever. Amazing! And so amazing that I instantly thought of a donut, then of Grandma Josephine’s donuts, then, “Okay, how can I infuse my donut recipe with this?”

On Wednesday, as I was frantically running around the house and kitchen trying to pull myself together from chaos, the ideas for how this donut could turn out just came to me. I quickly wrote them down so I wouldn’t forget. My plan was to make them later that night. But I couldn’t wait. (Because obviously, I’m Captain Impatient.)

And so I made the donuts with a Pumpkin Spiced Donut frosting (which was also brought to life from an old recipe I created – cupcake frosting) to accompany, and the rest is history. No reason to make anyone wait for this recipe.

Nikki said this flavor won’t be around long, so you’ll have to grab it ASAP. If I were you, I’d grab 5 jars of it (then you’ll get free shipping, too). Grab yours HERE. These will be perfect for Halloween, Thanksgiving, and Christmas.

And in case anyone cares….these donuts are gluten free, dairy free, Paleo-friendly, soy free, and corn free. They use no refined sugars or artificial ingredients. 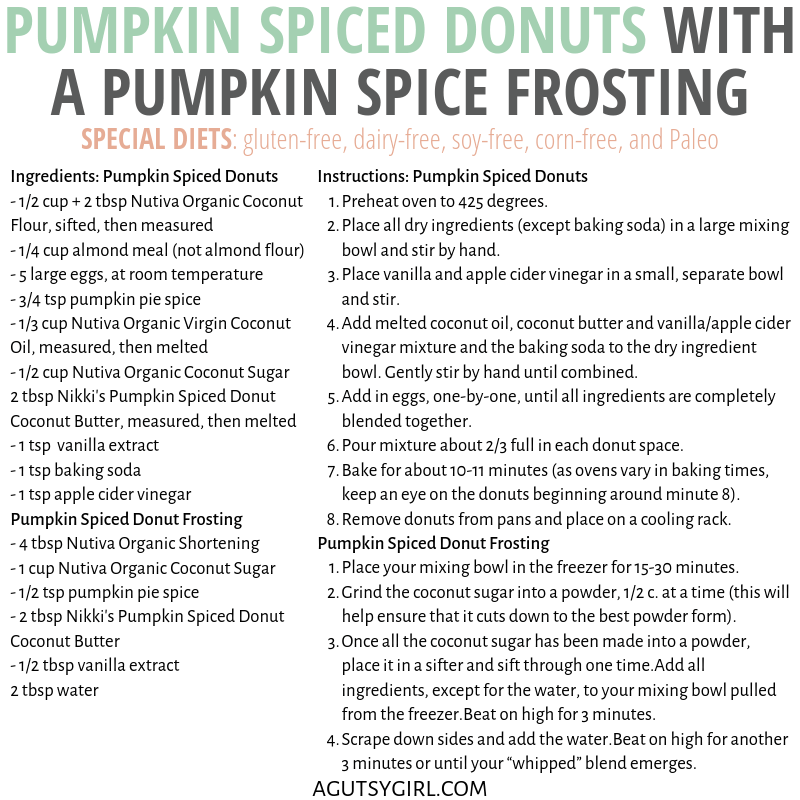