Tricked by Red JELLO is what I’m exploring today. Did you know about this trick?

It’s Actually Not that Healthy

I listened as Robyn O’Brien told the story about when her son ended up in the hospital after an allergic reaction. The nurses brought in Froot Loops and Red JELL-O. In that moment, she made it her mission to fight for her child and through this became a Food Activist.

A day later, I listened to Vani Hari’s (aka Food Babe) story which landed her in the hospital with an appendicitis. Once again, they brought in the Red JELL-O to help her “heal.” Today, Vani is also a passionate Food Activist.

It’s true that when we are sick with anything from the stomach flu to advanced forms of inflammatory bowel disease (and illness/terminal illness in general), it’s easy to reach for that “tummy calming” Red JELL-O.

There are a whole host of healthy lifestyle bloggers who live with IBS and IBD who will tell you their Red JELL-O helps get them through.

Click HERE to save Tricked by Red JELLO for later. 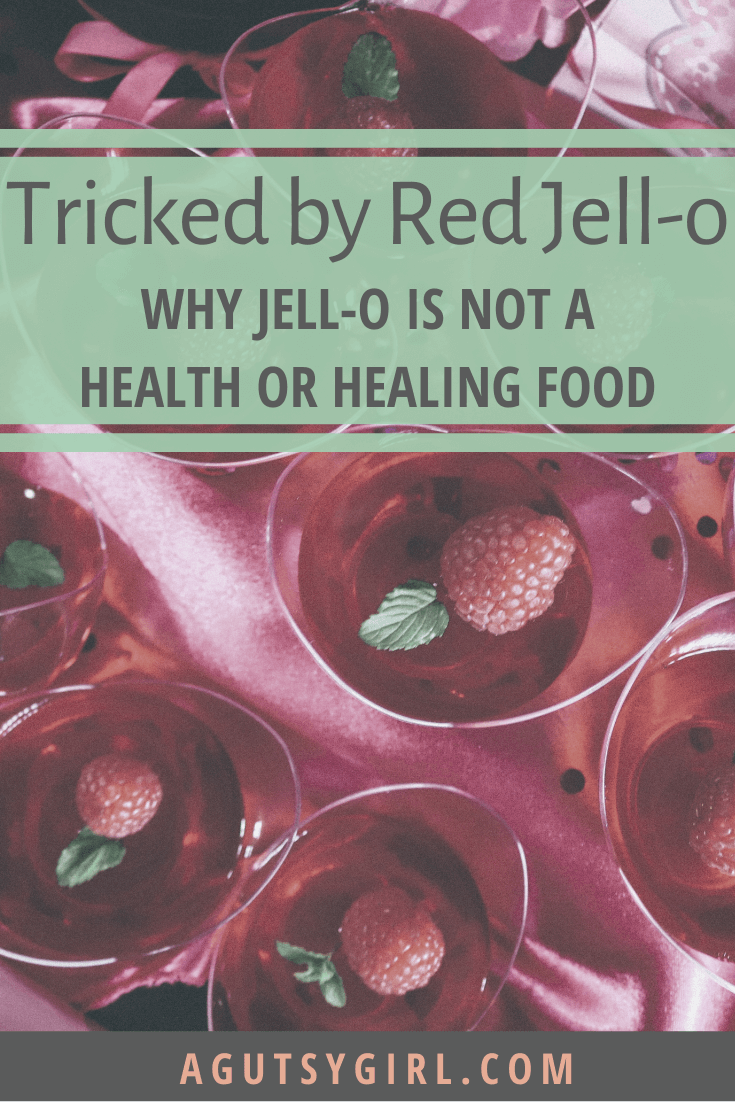 There are several flavors of Red JELLO, but for the sake of this post, I’ve chosen just one (and made sure it was also a sugar-free version because, let’s be honest, it only has 10 calories, is sugar free and therefore it’s clearly the “healthiest” version <- insert sarcasm): Cherry Sugar Free, Low Calorie Gelatin Snacks. Do not even for a second believe that all gelatin is the same.

Here is a Guide to Choosing Gelatin Powder. And HERE is information about why high-quality gelatin is great for gut healing. The gelatin in JELL-O is not the same.

The gelatin in JELL-O are byproducts of the CAFO Industry, and laced with drugs and hormones.

This is what gives the JELL-O its tart flavor and gel-like shape. “According to the Food and Agricultural Organization and World Health Organization Food Standards website, adipic acid might be listed in the ingredient list as food additive 355.”

Only a small amount can be metabolized by humans, and it is known to aggravate food intolerance (among other things).

This is food additive E331.

The reason this artificially-produced citric acid is called “natural” or an “organic acid” is that it has three carbon bonds in its formula and is therefore water-soluble. Citric acid actually grows on a fungus, namely Aspergillus niger, the ugly black fungus found around kitchen sink and bathtub tiles.

Additionally, research has shown that it tinkers with gut bacteria and can lead to obesity (<– yet another reason I preach that Gut Healing is Not a Diet).

Artificial flavors are simply chemicals derived in a lab, but this term is (one of) the most ambiguous terms a company can use in their ingredient list because we truly have no idea what it means. We do know,

Artificial flavors come from anything that is inedible (i.e. petroleum) that is processed to create chemicals of flavorings.

The U.K. has already figured this one out. They have banned it, and for good reason. It has been linked to cancer, childhood spectrum disorders, stomach issues and more.

This is anything but “brilliant.” It’s so not brilliant that it is banned in Austria, Belgium, France, Germany, Norway, Switzerland and Sweden. It can cause hyperactivity, skin rashes, chromosomal damage and more.

In 2003, when Brilliant Blue was used as a dye in feeding tubes, the FDA issued a public health advisory because of side effects like blue-tinged skin, urine, and feces, as well as hypotension and death.

This relates to aspartame (see above), and it is a requirement on labels as a warning for those who have PKU.

How Does Your Stomach Feel?

Don’t let the food industry trick you into thinking you will feel better from foods like Red JELL-O. You can feel better, but be far from healed.

There is a reason that we are not only not getting better, but that we are also getting even sicker.

Doesn’t it ever make you stop to think why it is that the U.S. Healthcare Ranked Dead Last Compared to 10 Other Countries?

I’ve been Gutsy for many years now, and even though I’ve spent these years beginning to tell my own truths to HELP the Gutsy community, I have not told all.

If you liked Tricked by Red JELLO, you might like the Blueberry Jel recipe in The Leaky Gut Meal Plan. You might also enjoy the series on Packaged Foods for Digestive Wellness.