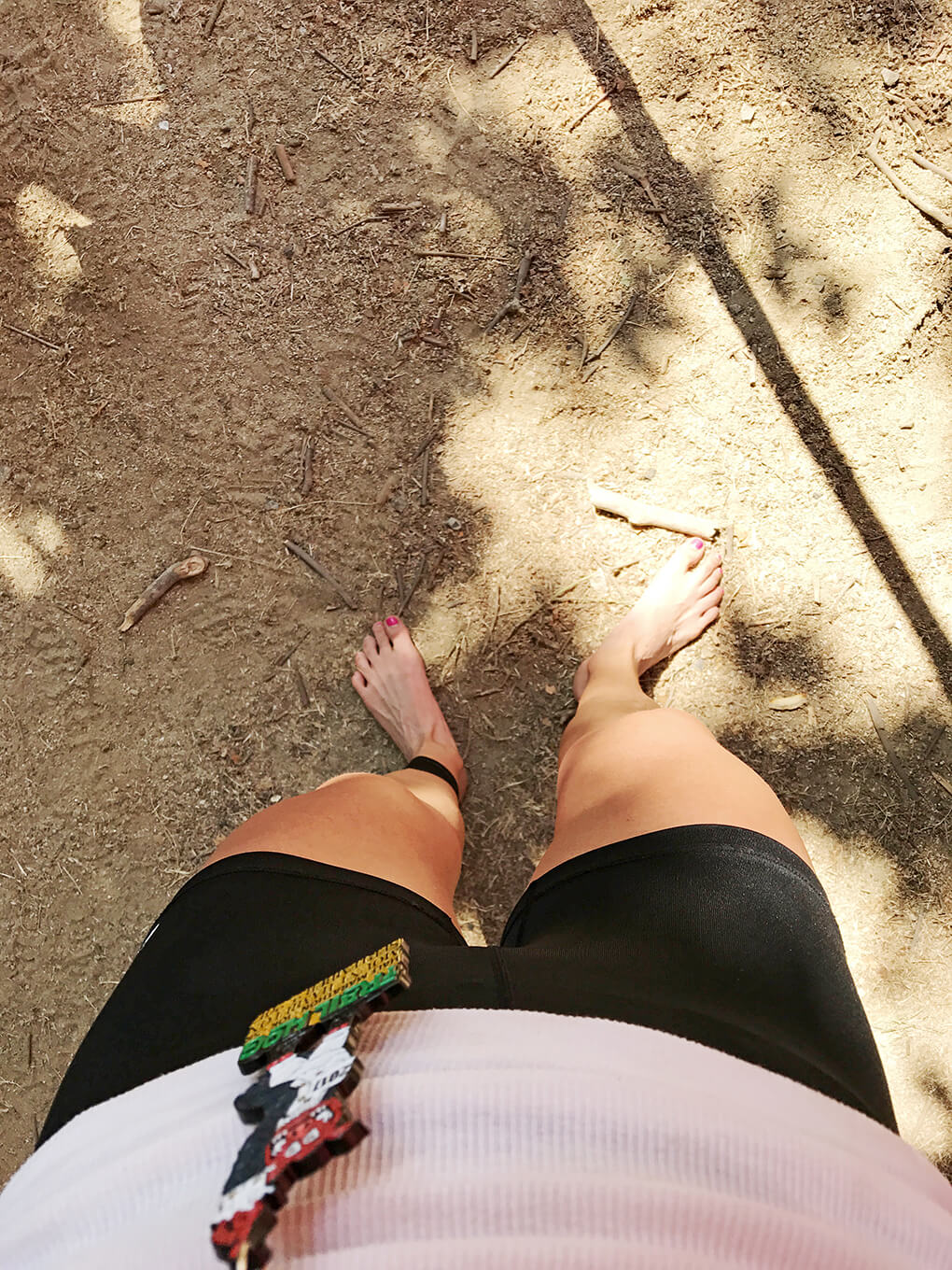 Around mile 9, I overheard a guy say, “It’s just survival at this point.”

I really could not have said it better myself.

Don’t let these next two images fool you. They were taken before the race when I had no clue as to what was ahead! Let’s set the stage for all of you who do not live out in this area of California or who have never run in the mountains and/or run in general.

The temperature that morning during the race was 103-105 degrees. Garmin told me total distance covered was 13.7 miles. The website said we would climb 1,800 feet (though a guy I know told me he recorded upwards of 2,200 feet). Unless you’ve done a race like that, it’s hard to imagine exactly what that combination would feel like. I had zero clue because even the day before when I knew what it was going to be, I thought it wouldn’t be that big of a deal.

I had two goals for this race coming off of my first trail race ever, and that was to beat my time (since the overall climb was less) and not stop for pictures, water, food, or anything else.

Not only did I not hit either of those goals, but I was far from hitting them.

This race took me about 10 minutes more to complete, and I had to stop at the last aid station for probably a good 3-4 minutes because I needed electrolytes and some salt stat. It broke down (literally) as such with 5 main things….

I’m proud of the finish, although it was a tortoise pace for me, and not for reasons you might expect. I’m proud because of that tortoise pace. The ambulance had to come, and I saw people on stretchers. I saw a man on the side of the trail (over 1/2 a mile from the aid station) who was in very bad shape and had to wait for medics to get it. Ryan told me people were dry heaving at the finish line. Others collapsed upon finishing or had to be rushed off for quick medical attention.

I could have run faster, but it would not have necessarily been better or stronger because it would have taken me out of anything physical for quite some time.

My health has been so great for such a long time now that I didn’t want to put myself in a position to ruin all the hard work I’ve done for a race like that where it was more survival than setting PR’s.

Shortly after the race, a guy I know messaged me, “Well I really hope that you don’t let this one race discourage you from any of the Ultras.” Nope. Not stopping. Not even for a moment did I think I’d never do one again. In fact, I got home and within 24 hours had signed up for the next…..Goonies on October 21 with a 13.1-mile course and gain of 2,734 feet.  With less than 7 weeks to go, I’ve got a lot of training (and sleeping and eating!) to do. The training strategy for these next 7 weeks includes more overall weekly mileage, at least one day a week on a trail or hill somewhere (or at the very least a hard running, not walking, session on the treadmill), a full day of legs, and WOD’s to fill in the gaps.

Did I mention how much I love, love, love trail running? Even in the awful heat, and even though I have to refer to this race as the Trail Hog Survival race, I had so many moments out there saying, “Thank you, God. Thank you for all the beauty in nature you have created.” Because it really is something incredible.

Where are my trail running friends at?! Have you ever a run a race in heat like this? How do you structure your weekly workouts? What has made the biggest difference for you in getting better, faster, and stronger on the trails? 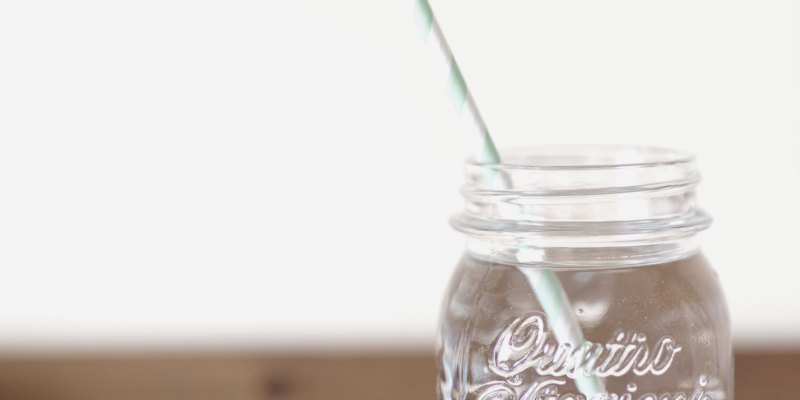 In honor of the Boston Marathon, I put together 5 Gatorade alternatives because, well, hydration.

END_OF_DOCUMENT_TOKEN_TO_BE_REPLACED 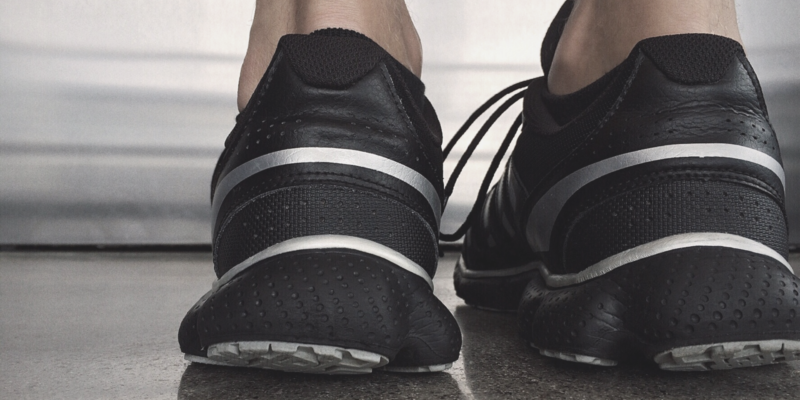 Running is a metaphor for life. I believe deep down that that’s what keeps me going.

END_OF_DOCUMENT_TOKEN_TO_BE_REPLACED 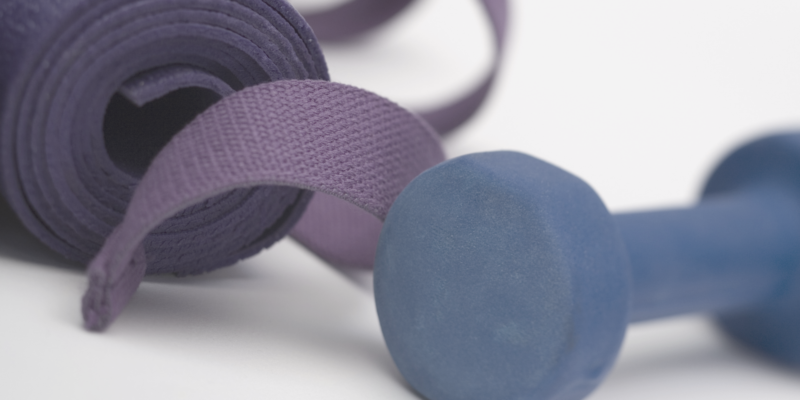 I want to share with you how to build the best home gym (or how we did, anyways).

END_OF_DOCUMENT_TOKEN_TO_BE_REPLACED 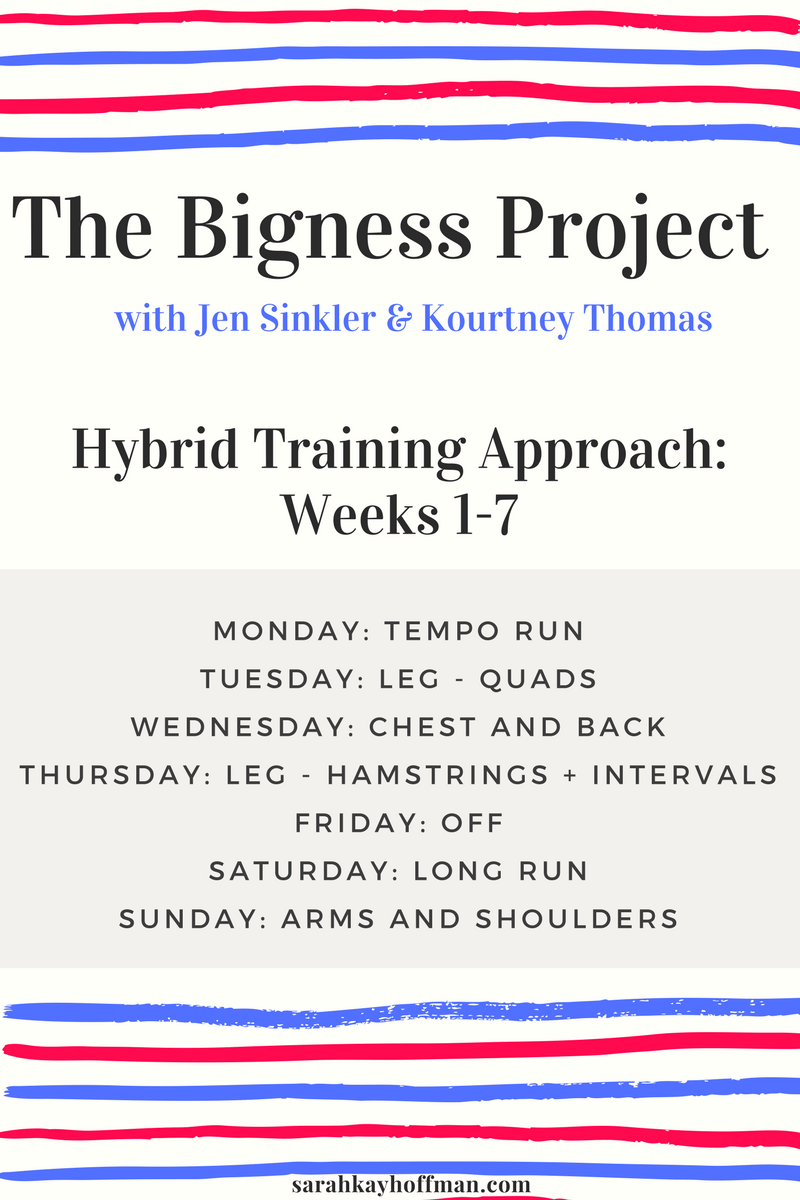 Here is how The Bigness Project went down for me.

Jen Sinkler is an old “friend” from the Midwest (I use the term “friend” lightly because it’s not like we were having weekend brunch together or anything, just coffee once, but I’ve known her for a very long time now), and I think she’s brilliant at what she does in the Fitness realm so when I got her email last week about The Bigness Project, I was intrigued.

I’ve been #running so much lately, @jensinkler, but I totally want to do the #BignessProject! https://t.co/8jxzSKR6Ys So conflicting! 🙂

We went back and forth, Kourtney and I, (and I also checked out her website for validation) until I finally decided to join the project. According to the program,

The Bigness Project focuses on growth, on Bigness in both muscles and mindset.

In so few words, mindset growth is what I am currently focused on in both my fitness and personal life.

It’s hard to image “bigness” in muscles combined with running. Honestly, I’m a little unsure about the training and results, too, but when I asked Kourtney how she adds in her training runs, she responded, “Mmmmhmmm. I’m an endurance runner too 🙂 2 higher intensity runs/week (track + tempo), 1 long on the weekend.”

Finally, someone speaking my language because that is exactly how I “scaled back” running these past few weeks (and feeling the runs stronger because of it).

I read through the program user manual and actual 14-week plan, and then I merged it with current running training.

The way I’ll train these next 14 weeks is via Hybrid Training.

On page 35 of the user manual, it states,

Hybrid Training is a concept refined by Alex Viada, cofounder of fitness company Complete Human Performance. His concept involves stacking your cardiovascular training strategically throughout your training week to maximize recovery time and allow the best possible training effects of any sport or activity you participate in. In this instance, we’re talking about bodybuilding and endurance sports of any kind: running, cycling, swimming, rowing, etc. This way of training allows you to stay cardiovascularly fit while not impeding or killing your gains.

With hybrid training your workouts have a specific purpose, and you spend your time between very low intensity and fairly high-intensity threshold work. Your volume won’t be high, but you’ll maintain your cardiovascular fitness.

There are 2 phases to the Bigness Project, so I’ll lay out for you how my weeks will look, training-wise, for the next 7 weeks (this is a general guideline, not an absolutely because, well…..life):

The best parts of this entire program are three-fold:

I may share my Bigness Project updates on my blog (I’ll tuck it under running), but for sure I’ll share things here and there via Paleoishmama, so come follow!

p.s. the project is now closed so I don’t think you can get it again for awhile.

p.s.s. Jen and Kourtney, if you read this, there is an extra bedroom at our house, in case you ever want to come to Northern California for one of your “in person Bigness Project workout stops.” The garage awaits us. 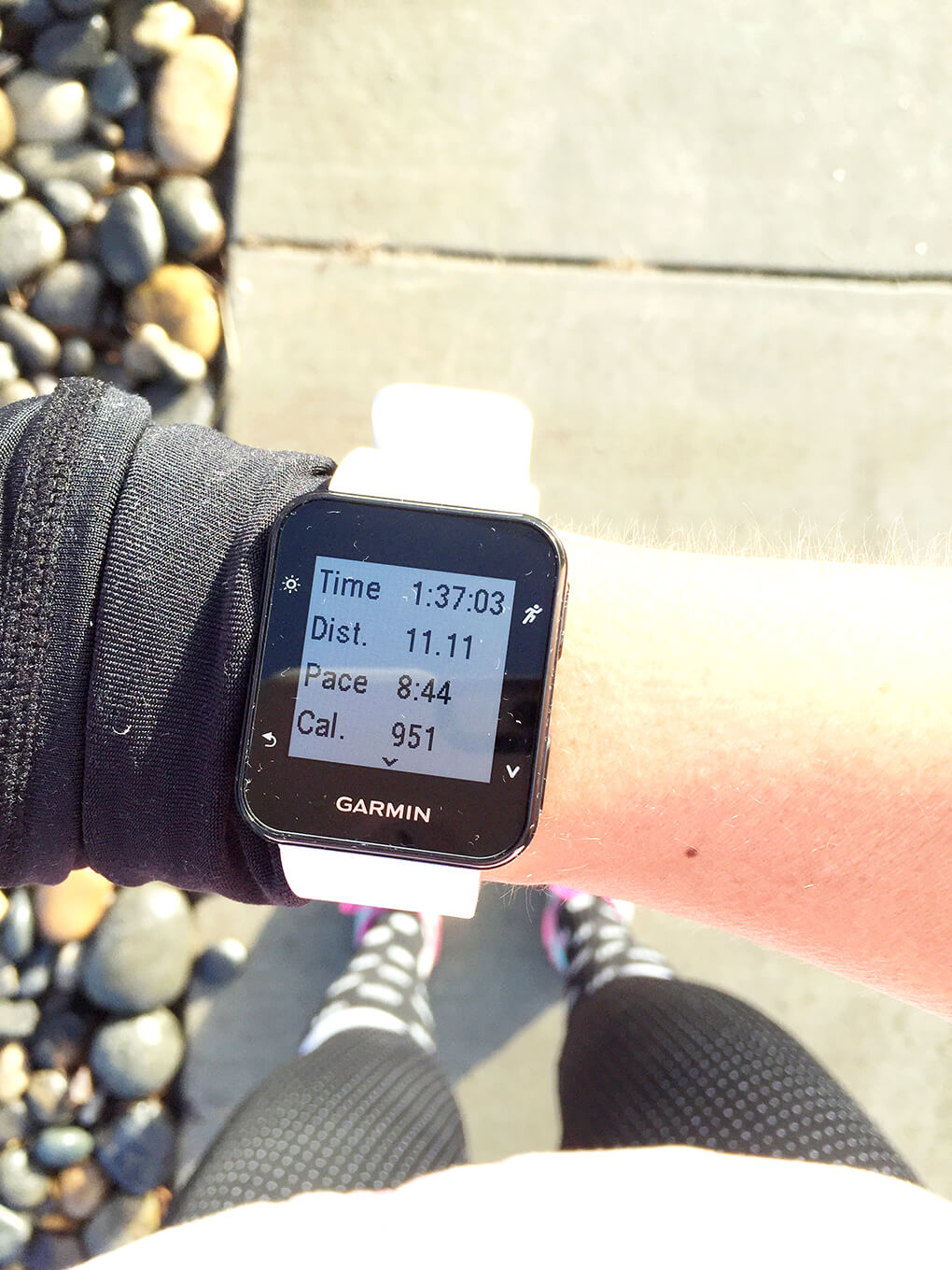 Perhaps I am running with a frown, but my heart is happy.

Can I just tell you how much I cringe every time I read an article or listen to a podcast by some fitness guru who says, “Ladies, just stop with all the running! I mean, I’m always driving by ladies who are running with a frown. They look so sad because they hate what they are doing.” The conversation then always moves to how “if you don’t enjoy running, then stop it, because it’s not helping you lose weight or get that perfect body.”

Running with a Frown

This condescending tone must stop.

On Saturday morning, I hit the road for an 11+ mile run. It was my best run yet, and during the long run, I listened to two podcasts (Chris Kresser + Fizzle) and random music here and there.

I smiled just one time during the run, and that was when I ran past another runner who waved to me. This is because I don’t smile when I run, but it’s not because I’m miserable, sad, or pondering thoughts around, “Will this run get me the perfect body?”

No, it’s because I am focused….on the run, breathing, foot placement, and many other things like my thoughts and a variation of deep meditation. Oftentimes the same is true when I’m walking, lifting, and doing every other type of workouts I enjoy. I’m not one to smile when I workout. I never have been, and I never will be.

But I am happy. On the inside, I beam. If I wasn’t, I would not be doing it, and would not have the drive to hit the road, consistently these days, for 10+ miles. (Because there was a time when I hated running.) Almost three years ago, I wrote this post called, “Never Judge the Face {By a Frown or Frown-Upside-Down}.” It could not ring truer today.

Do you know how many times I (and you, too, likely) smile and it’s fake? Smiling is an act, and not all acts are genuine. I know this from my life’s experiences, all of them. But I also know it because each time I go to Bikram Yoga they say, “….healthy head, open heart, and a smile on your face.”

I smile in those moments, to appease the teacher and everyone around me. Rarely am I actually happy. I know I should, but I just do not truly enjoy or appreciate yoga. My smile is fake, and only from an outsider’s perspective, am I happy and loving yoga.

The running community is really amazing, and yet for those not in it, I always feel like I’m defending running with a frown because “surely it’s something no one could truly enjoy.”

I don’t run to achieve some sort of body, and I think we need to stop inferring to women that there is a direct correlation between smiling and going after that “perfect body.”

What is real? Keeping to your own lane, not judging another lane, understanding that looks can be deceiving and that running with a frown might be the happiest thing you see all day. p.s. I’ll hopefully share my recent workouts via the Running category soon. I started running less, making them count more, and sprinkling in other things. It’s really paying off, I think!